SALT LAKE CITY — Tony Kushner’s epic stage experience Angels in America is a theatrical landmark. No getting around that. It’s an important piece to see and to study, to feel and to share. Kushner is an exceptional playwright; his way not only with words but with emotion is stirring, and he doesn’t shy away from difficult subject matter. In fact, he embraces it and forces his characters—and his audiences—to do the same.

Last week I was lucky to attend to the closing performance of SLAC’s run of Angels in America Part One: Millennium Approaches. In conjunction with that production, the same company is presenting a limited run of readings of Part Two: Perestroika. Despite the brilliance of Millennium Approaches, well emphasized by the strengths of SLAC’s production, the play doesn’t feel finished. It’s meant to go on, meant to be one epic experience instead of two smaller ones. Millennium Approaches—with its angel crashing through Prior Walter’s ceiling—ends with a bang but, at the same time, doesn’t really end. So it’s very much a kindness—and a labor of love—on the part of the company to complete the cycle and let the audience, and the characters, enjoy closure.

Perestroika is incredibly funny. A gift the entire cast shares is comic timing. Kushner’s text is very smart, very clever; I learn something every time I see or read one of his plays. At the same time, he doesn’t sacrifice emotional connections to achieve that intellectual richness. His characters are very real people who make real choices and suffer real consequences. That may sound absurd in the context of the play—not just one angel makes an appearance, but a boardroom full of them—but Kushner makes it work. In the hands of a lesser writer, the story would seem politically ambitious and trite. With Kushner, it’s simply true.

And this cast, directed by Keven Myhre, is incredibly solid. They make that truth ring. Despite the fact that production value was purposely taken down a notch, that actors were reading and that the lights are just a simple wash, I could still see, hear, and feel the story. The cast was not slowed by their scripts, except for the occasional awkward embrace; for the most part, because their readings flowed so well I forgot about the books everyone was carrying.

Lucas Bybee’s portrayal of the reluctant prophet Prior is the anchor of the play for me. As a character, Prior encompasses what the play seems to be overall: savage at times, heartbreaking at others, and laugh out loud funny in between. Bybee’s sincere, complex performance is merely the center of a very talented ensemble. Just one more example: Nell Gwynn’s voice gave me chills every time she was on stage. In addition to her verve as the Angel, she performs one of my favorite monologues in the play, as the Mormon pioneer mother, a hallucination who explains to valium-addicted Harper (Christy Summerhays) the way that people change, the way that God changes us, that we are “just mangled guts pretending.” As much as I love live theatre, I wished in that moment that I had the remote for my DVR so that I could pause to soak in what I had just heard, only to then rewind and watch it again.

One interesting plus of the reading—set pieces are moved and, as I mentioned before, some costumes are employed, since most of the cast play multiple roles—was the presence of Cassandra Stokes-Wylie as the Reader, who read aloud all of the stage directions and settings that could not be presented. Including the stage directions underlines the fact that this play is a complete work; that the action and interaction, even hints of the design in many ways, all come back to the playwright, whose voice can be heard in the simplest of actions.

Maybe it’s because I’m a playwright, but I love readings: they put the words up front. What is done on stage is important because it accompanies what is spoken. While that’s generally the case with strong theatre anyway, it was a pleasure to be reminded how well this play in particular works on the page as well as in the hands of such a talented group of people.

Salt Lake Acting Company’s staged reading of Angels in America Part Two: Perestroika runs through November 7.  All remaining performances are sold out.  For more information about this production and others, visit www.saltlakeactincompany.org. 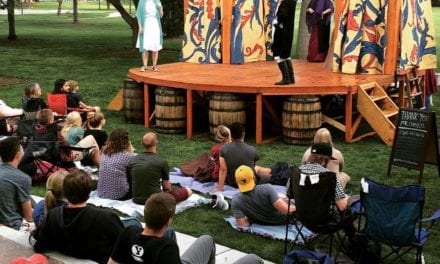 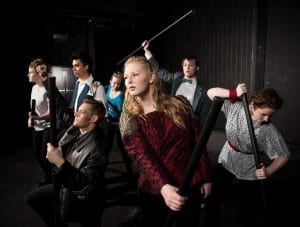