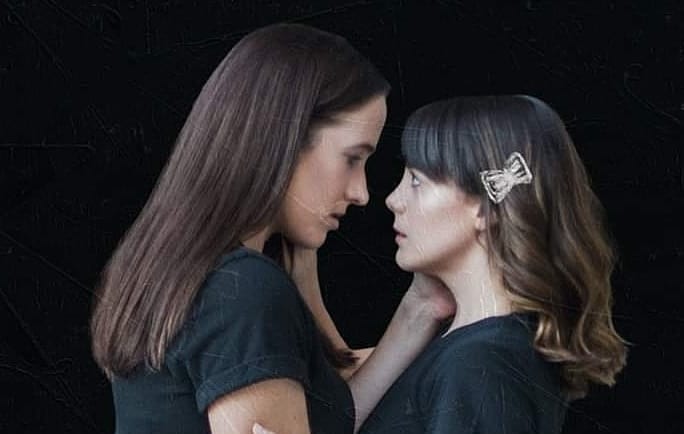 PROVO – Jen Silverman describes the setting of her play The Moors as, “TIME: The 1800s…ish. PLACE: The bleak moors of…England? Think Wuthering Heights and Jane Eyre and the Brontë sisters…No ‘period piece’ accents—this play is about the present.” A unique and compelling dark comedy, The Moors at An Other Theater Company explores many significant themes surrounding relationships through an absurdist and existential lense.

In the mansion home of Master Branwell, sisters Agatha (played by Bryn Curry) and Huldey (played by Maddie Smith), spend their days together along with a large Mastiff (played by Bryce Lloyd Fueston). Emilie (played by Chelsea Hickman), invited by Master Branwell, arrives at the mansion assuming she is there to be the new governess. She has been communicating with the Master through letters, though she becomes suspicious as Branwell is now nowhere to be found. As Emilie attempts to make sense of her new surroundings, the eerie moors begin to make their mysterious nature known, setting the characters on dangerous and surprising paths.

Directed by Angela Nibley, The Moors fluctuates between a period piece and a modern present. Dialogue and language styles change throughout, seemingly crossing time and space. It is explained “that’s how time works out here,” and that, “all things here are possible.” Ultimately the world Nibley created was one that was ethereal and detached from reality. I noticed random or strange things throughout, like unusual movements or sounds, that helped to remind me of this disconnected world. 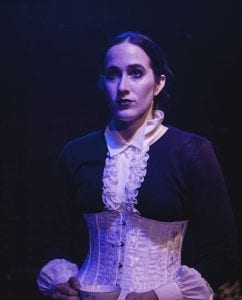 The arena staging, blocking, and design made clear that the audience was effectively in the moors alongside the characters. A spooky and chilling atmosphere was created before the play even began from the sound of whistling wind and the appearance of a thick night fog. Sound design by Liz Whittaker, set design by Taylor Jack Nelson, and lighting design by Ryan Hopkins all complimented each other to create this peculiar place that the audience is a part of. This was made more evident as the characters walked behind the audience’s seats from time to time, and as the bright and dynamic lights would illuminate my presence. The painted mural by Lyndee Baumann was beautiful and expertly skilled, while providing the bleak and stormy landscape of the moors.

As the older sister Agatha, Bryn Curry is stern and assumes the role of authority in the mansion, emphasized by her firm mannerisms and impeccable diction. As Huldey, Agatha’s younger sister, Maddie Smith is perky and excitable, craving attention and validation. The character’s high emotional extremes lead her to being later conflicted with her thoughts and actions, and this journey was portrayed well. Viviane Turman as Marjory/Mallory (the maids) was comical, representing a big personality and expressions to match. Chelsea Hickman as Emilie realistically portrayed confusion and surprise as she attempts to figure out just what is real in the moors, including her own feelings and pleasure. 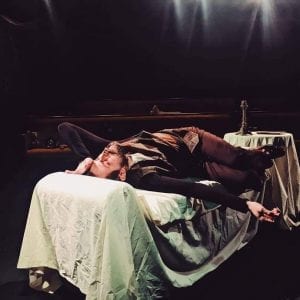 Bryce Lloyd Fueston as The Mastiff was wonderful. The play starts with him laying on the floor and responding to various commands, and then he begins his first monologue by scratching behind his ear. He is philosophical and anxious from continuously contemplating his existence. He has “too many thoughts” that remain unshared, making him lonely, depressed and ultimately obsessive when he finds positive connection with The Moor Hen. The interactions between these two were undeniably the scenes I most enjoyed.

Laura Elise Chapman plays The Moor Hen, and nicely contrasts Fueston’s intensity with a calm and simple manner. After seeing Chapman in a couple of shows, I am struck by her remarkable talent. I was gripped by her character from her first line. She is immensely animated in her body and voice, and her expressive movements and facial expressions make her enjoyable to watch. I also found I was most moved by the relationship between The Mastiff and The Moor Hen.

Sexual undertones can be felt throughout the show, often emphasizing the role sex can have in relation to power. I appreciate innuendo when it is done well, and the subtle yet apparent way it was handled in The Moors was impressive. While I thought this production was more thoughtful than it was funny, there were humorous moments, surprising violence, and much to contemplate.

The Moors looks deeply at the need for mental, emotional and physical connections. The characters desperately want these needs met, and sometimes go to drastic lengths to achieve what they hope will indeed meet them. The emotional stakes in The Moors force the characters to control and manipulate the others because of love, hate, self-gratification and a mindset that others should only live a life that is conducive to their own. Upon pondering these themes, The Moors stressed to me that having somebody that will listen to us, that we can share our feelings with, and will let us be ourselves is invaluable.

The An Other Theater Company production of The Moors plays Fridays and Saturdays at 7:30 PM and Sundays at 5 PM through September 28 at the Provo Towne Center (2nd floor, near Dillards). Tickets are $13-17. For more information, visit anothertheater.org. 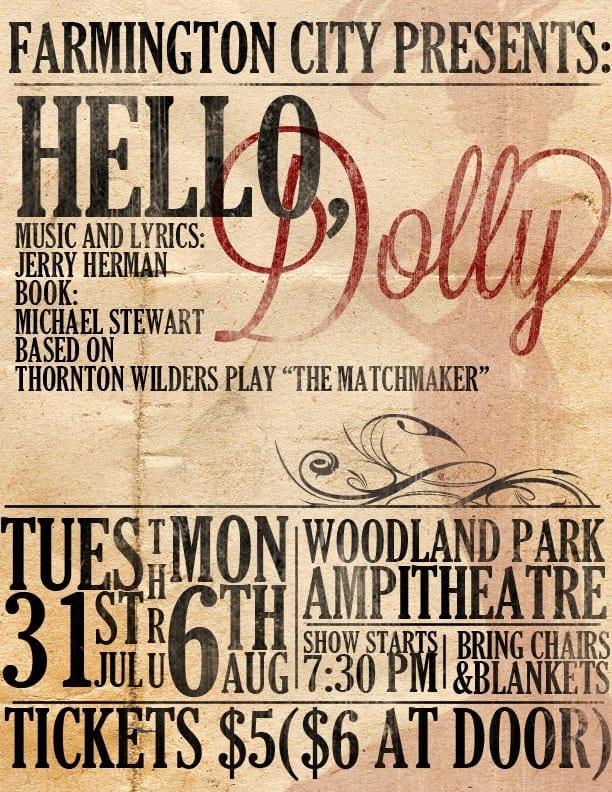 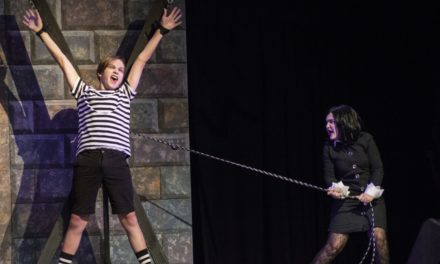 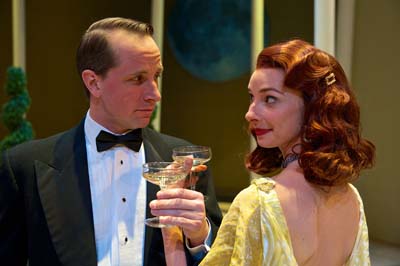