OREM — I thought Cinderella was one of Rodgers and Hammerstein‘s lesser works. Originally written for television, it is about half as long as their other shows, has no subplot, and lacks the powerful message of their most famous musicals. However, SCERA’s production of Cinderella is so strong that I now recognize the show as being in the same league as favorites like Oklahoma! and The King and I.

Robinne Booth‘s direction lacks pretension, and she concentrates on delivering a story in a straightforward manner. Booth focuses attention on main characters and ensures that complicated crowd scenes do not distract from the main purpose of the moment. I enjoyed Booth’s recurring use of freezes for the ensemble, which unified several scenes together without feeling overused. I also found “A Lovely Night” to be very engaging, as the stepsisters hilariously relaxed by taking off their shoes, petticoats, and layers of their ball dresses and pretended to have had a better time than they did.

Choreographer Dani LeCompte did excellent work in the ball scenes, where about a dozen couples waltzed and promenaded around the stage in all their finery. The dances were not complex, but they suited the setting and projected elegance in every scene.

In the title role, Kelsey Phillips Harrison is light on her feet and delightful to watch. Harrison’s understands her character’s deep desire for an escape from the drudgery of her life, and every song is imbued with a wistfulness for excitement and beauty. Harrison blossoms in the ball scene, and her dance with Prince Christopher (played by Brendon French) in “Ten Minutes Ago” was supercharged with romance because the two seemed so riveted by each other. 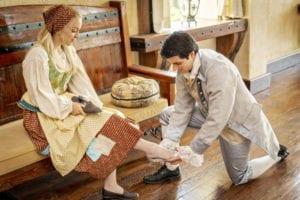 I took a little longer to warm up to French. The prince’s first scene (with his parents discussing the upcoming ball and the need to get married) was bland because French’s line delivery was wooden. But all his remaining scenes were stellar, and all was quickly forgiven. The prince doesn’t sing until the second act, but it is worth the wait to hear French’s controlled, steady voice float through the tuneful melodies of “Ten Minutes Ago” and “Do I Love You Because You’re Beautiful?”

Working hard to steal the show were Abby Bradshaw and Emma Garrett as the stepsisters Joy and Portia, respectively. Their nasally performance in “Stepsisters’ Lament” and “A Lovely Night” was a comical contrast to Harrison’s sweet, heartfelt singing. I also found LeCompte’s performance as the stepmother to be more realistic than most portrayals of the character. LeCompte’s stepmother shows her cruelty by being dismissive of Cinderella’s feelings and taking sadistic joy in coolly ordering Cinderella to work. It’s a subdued performance that is far more effective that trying to match the stepsisters in over-the-top zaniness. 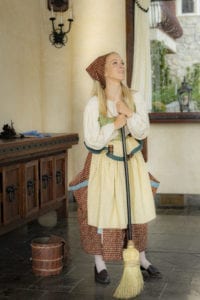 What the director, choreographer, and actors all have in common was that they got out of the way and let Rodgers and Hammerstein do what they do best: create splendid moments on stage. These are artists who trust the material and serve as a conduit to bring great writing and songs to the audience. It is rewarding to watch talented people bury their egos and their grand ideas in order to allow the material stand on its own.

One strength of this production was Deborah Bowman‘s costume designs. Bowman dressed the ensemble in generic eighteenth century garb: men in white hose and breeches and white long-sleeved puffy shirts and women in shin-length skirts, white airy blouses, and corsets. The look was uniform, neat, and idealistic, which served the make-believe setting well. The ballroom scene was full of glossy fabrics and other signs of refinery that helped create many exquisite stage pictures. A stroke of genius on Bowman’s part, though, was to give Cinderella the only dress with spangles on it, thereby ensuring that she would stand out from the other women on stage and appear special. No wonder the prince wanted to dance with her. 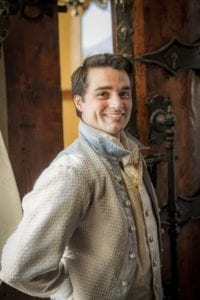 Shawn M. Herrera‘s set was another asset to the production. The kind and queen’s chamber at stage left and Cinderella’s home at stage right brought balance and order to the stage. The upstage wall opened to show a large, striking clock (pun intended). A nice touch was to embed twinkling and blinking lights in different set pieces to showcase the magical action of the play.

It isn’t often that a production can get an experienced theatre critic to change their mind about a play. I like to think that I am an astute judge of shows and can distinguish between a script and a production to determine which shows don’t work because of production decisions and which don’t work because of inherent problems with the show. But the cast and crew who worked on Cinderella elevated the material and showed me that the play deserves more attention and praise than I had given it in the past.

What it deserves most, though, is an audience. SCERA’s Cinderella is packed with lovely moments, which is appropriate for a show with a song called “A Lovely Night.” The show has a delightful score, and the SCERA gave the production a sincere style that bolsters the writing and music. Everyone should try this Cinderella on and allow its magic to transform their evening.