SALT LAKE CITY — Little Shop Of Horrors produced by Murray City Cultural Arts was a nice breath of fresh air … through a mask. I appreciated the outdoor stage and spacing between groups; however, I thought requiring masks while seated was a little over the top. The artistry and talent in the show were great, yet the mask issue was distracting, because every actor had a “chin warmer” with a piece of plastic attached that covered the mouth. Some actors had face shields. This plastic caused a reflection to hide many expressions and made it difficult for me to enjoy the show. 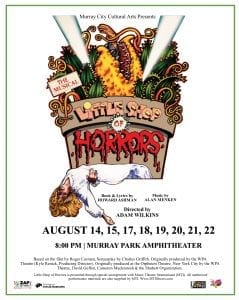 Unlike the movie, the stage show with music and lyrics by Alan Menken and Howard Ashman has a darker ending, and I wasn’t expecting such a negative story line. They put on this show with the gag that it fits well with the COVID-19 pandemic. Though I agree, I still was depressed afterward, precisely because we are in the midst of a pandemic and it’s hard to laugh at. However, Adam Wilkins did a fine job directing, and he created many moments of humor throughout the night. Upon reflection, I had a good time. I loved the “freeze frame” everyone on stage did near the beginning while a clock ticking sound played, helping me feel the danger looming. I also enjoyed the scene between Seymour and his boss where the boss holds his breath, anticipating Seymour to give in to his desire. Seymour pantomimes fishing lazily while his boss is nearly passing out from lack of air. There was a part when the whole cast sings together the song, “Total Eclipse of the Sun,” and it was perfectly in sync. Tamara Howell was the music director responsible for such wonderful moments. I also loved how she got the three girls (like muses) singing so well in harmony as they narrated the story. The dancing and choreography were also cute and fitting for the three muses.

Issac Carillo did a great job as Seymour. Carillo had a good demeanor of skittishness to fit his character, in body and voice. I wish I could have seen Carillo’s face better, but the mask and his glasses prevented it from where I sat. I also enjoyed Seymour’s scene with the dentist and how he attempts to be forceful yet is completely terrified. It was fun to see Seymour’s change near the end when he finally gives in to anger at the plant.

The set itself was amazing. I couldn’t wait to see how big the plant would grow. It had a deep velvety red surface that made it seem even more menacing, and to see it fill the tiny flower shop was so fun and scary! I also hoped it would get even bigger at the end with all it was eating. Madison Howell was fantastic with the costumes. I loved the muses’ matching dresses, with green plaid skirts at the end, and their hairstyles, all the same but different shades. I also thought the green biker jacket at the end for the dentist was amazing.

Orin, the Dentist, was played by Josh Bone. He had a wonderful voice and did extremely well at portraying a complete jerk. I loved his scene with the laughing gas, which was super funny with his sudden bursts of laughter amidst the uncomfortable lines. Audrey was played by Elaia Echeverria, who was also fun to watch, and her accent was the perfect fit for skid row. I do wish Echeverria’s voice had been more powerful during the song, “Suddenly Seymour,” where she has some strong belted notes; however, that song was the only time I noticed a problem. Echevarria performed well during scenes with Bone, and I could feel her intense fear from way up in the bleachers.

Samuel Wright made an awesome Mushnik, and despite the face shield, I was mostly able to enjoy his strong character due to his skilled movement. Wright as Mushnik’s reactions were over the top with his body reacting so much it was comical at times. I enjoyed how well this style fit into this musical, and I would be happy to see Wright perform in future. Doug Cahoon played the plant, which was a lot more work than I would have thought. I loved the character’s attitude and how through the tone of voice I could hear how rude the plant got when he changed from being Seymour’s friend to his enemy. The movements of the large mouth were quick to keep up with the speech, and I rarely saw the two unaligned.

Despite the mask issue, I had fun and enjoyed this production. They cast and crew put so much work into it, along with adding the face coverings for each actor (which did get in the way of face microphones more than once), that I had to give a standing ovation. Though it was more than annoying to deal with all these precautions just to go to the theatre, this show is definitely worth seeing, and a fun (though dark) way to spend a summer evening.

Murray City Cultural Arts’s production of Little Shop of Horrors will be playing at the Murray Park Amphitheater (495 E 5300 S, Salt Lake City) through August 22, 2020, at 8 PM. Tickets are $8–$10. For more information, please visit this website.

GOOD STANDING is a compelling look at religion and sexuality