GOOD STANDING is a compelling look at religion and sexuality

SALT LAKE CITY — The Great Salt Lake Fringe Festival is always an exciting time for the Utah theatre community, and Next Step Theater’s production of the one-man show Good Standing was an excellent selection for the all-digital version of the festival this year. 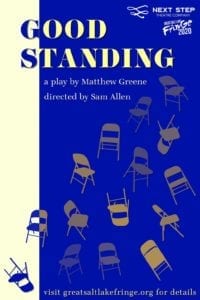 Over the course of an hour and a half, the online audience sees the happenings of a “court of love” (now called to a religious trial) for a gay man raised in the Mormon faith who has married another man. It is understandable that as many theater companies temporarily switch to online productions, there are going to be some rough patches in how the show translates from stage to stage/screen. This was apparent a few times when the editing of the prerecorded show ended up cutting off a few words when switching camera angles, but it was easy to ignore because the play itself was just that compelling.

Matthew Greene’s script excellently portrays with little bias the members of a stake high council, the group charged with conducting the trial. There are many arguments made in the room, as all sixteen men are seen going through their own trials of faith to varying degrees. This one-man Mormon Twelve Angry Men, combined with Sam Allen’s excellent directing and Kenneth Starling’s impeccable acting, keeps the show very exciting.

As there is only one actor, Starling plays all the characters: Curtis Brown—the gay protaganist—as well as the fifteen members of the High Council, and boy does Starling play them well. His transition to and from each character is so seamless; there’s no specific distinction to any of the men, and yet the instant he has switched characters is clear. Every time a member of the High Council has finished monologuing, there is only a beat or two, and maybe a glance to the side or a slight change in voice, and suddenly Starling is back to being Curtis.

Visually, the scenic and lighting designs were very minimalistic. Devin Manful’s choice of two platforms and a number of folding metal chairs made it feel very much like an LDS church, and it is a design that would translate well to any kind of stage. There were moments where Starling’s use and movement of the chairs became slightly distracting. For example Starling kept moving chairs around in a hectic manner while a character was ranting. It added to the chaotic tone of the moment, but not the story. At other points, such as when one member was telling an allegory of taking the right path, the chairs added a certain depth that made the story very meaningful.

Aaron Gubler’s lighting was at times lovely, and at others a little confusing when an odd color choice was amplified by the white chairs and white shirt. I don’t know how accommodating the performance area was for Gubler and how much flexibility he had with the design. This is another example of the struggle to bring theater to the screen; the same lighting design that looks good on stage is not necessarily going to translate so well on camera.

Finally, it was a nice touch how even though there were no women present in the court, there were still wives, mothers, and daughters who were given a great deal of personality, even if it was just for a moment. One highlight in this regard was how the bishop’s wife influenced his work greatly.

As a gay person who was raised in the Mormon church, Good Standing was a long-needed therapeutic experience. To all audiences, I recommend this show as a safe space to explore ideas and feelings while still being entertained.

The Next Step Theatre Company production of Good Standing plays as part of the Great Salt Lake Fringe Festival through August 9. Viewing the production online is free, though the company asks for a donation to the Black Lives Matter chapter of Salt Lake City or the Utah Pride Center. For more information, visit nextsteptheatre.com or www.greatsaltlakefringe.org.