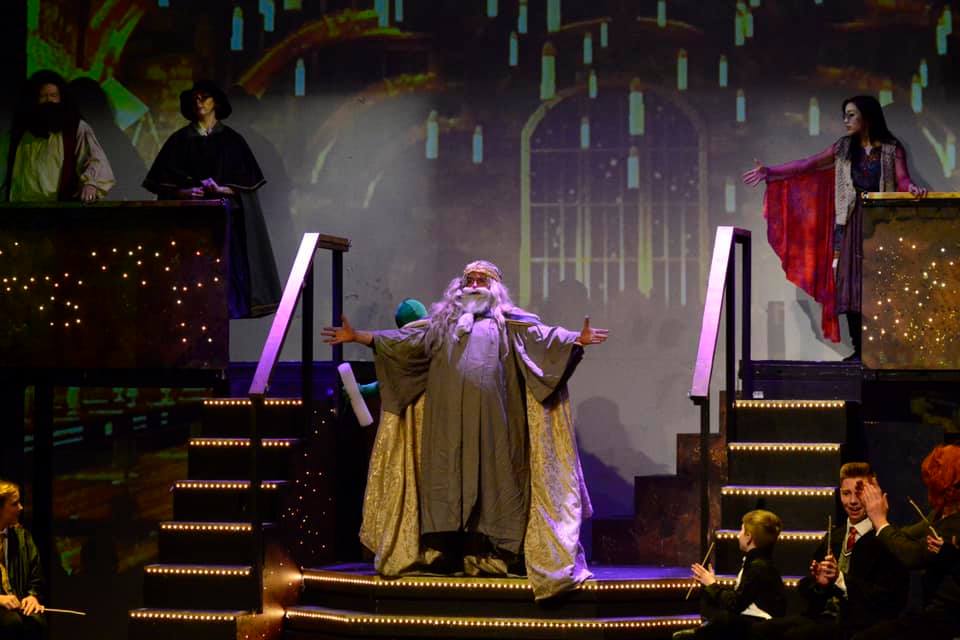 Having attended and reviewed this production each year, I’ve felt a little bit like I was watching a workshop process of a show, seeing some of the good ideas that stay and watching the production team make choices of what works and what may be done better next time. This year I was very impressed with some of the strong additions that seemed to make for a better evening of entertainment. One of the strongest additions was the backdrop projections, designed by Jake Holt. These projections gave the ability to add the magic of talking paintings, moving video, added scenes, and many other things that could give the production a lot more versatility and that added so much more to the show.

A second fun addition to the year five production was an audience participation element to the sorting hat process. I do not want to give too much away for those who may still have a chance to see the show in its final weekend of production, but there were a few audience members that were lucky enough to receive a letter upon arrival, and they got to be a part of the magic. I was impressed at how this added to the joy of the young theatre-goers in attendance. There was also an added bonus of being able to have a photo opportunity with Father Christmas at the end of the show as well, and that makes for a great experience for theater-going families.

With a new director this year, Holt, a few things are a bit different, but it is still overall the same Fairly Potter that fans have loved. If you have seen it before, you will be happy with this installment, and if you have not seen it, this year is a good chance to see a cheesy yet fun parody to get you in the Christmas spirit. Avery Franklin does a great job as Jerry Potter (need to avoid any copyright infringement), the hero of the story, and Franklin has a beautiful voice that is apparent from the beginning song, “This Could Be the Year.” As the show progresses, it becomes apparent that most of the professors are a parody of one kind or another, with my personal favorite being professor Alan Rickman, played by Jim Dale. Another thing to be noted is the skill of most of the actors at playing more than one character with the two playing multiple characters best being Caleb Parry as Bumblebore and Spahginni and Tim Behunin as Squirmtail and Bagrid. I may be a bit simple, but my favorite part of the night was when Behunin yelled out, “I would love to, but I’ve got another costume change!” It was either that moment or perhaps the lovely school song, “Don’t sue us J.K. Rowling.”

While it is mostly a cheesy tongue-in-cheek parody, the best part is the original songs by Rea. My favorite song is the, “Wait Another Day,” sung by Harmony played by Teanca Rossouw, by Don’s Sister played by Rebecca Stephens, and by Moaning Moana played by Pamela Jensik. Every year when I hear this song I am reminded that I would love to see more original works by Rea. I hope that he is continuing to write and build his skill, because the Utah theater market has shown that they are willing and ready to welcome new works.

There were a lot of jokes throughout the show about limited budget for actual magic, but the lighting design and tech by Jess Hall and Kelsie Reynolds, as well as the sound design by Kyle Lawrence and set design by Ryan Sabin and Eb Madsen, did bring a bit of extra magic this year.

The other impressive part were the young children that made up Father Christmas’s elves. From their strong vocals to their choreography by Holt and Becky Knowles and to the impressive gymnastics inserted, the young children stole the show. Adyson Brady as head elf Lulu had a strong voice and humorous characterization. She was a delight to watch.

It is important to consider what you are seeing when attending A Fairly Potter Christmas Carol. The story does not exactly make sense in the context of any of the stories it is mocking, and it may not be the most award winning show, but it should bring a smile to your face, give you a much needed break, and give you something to laugh at during this busy holiday season. 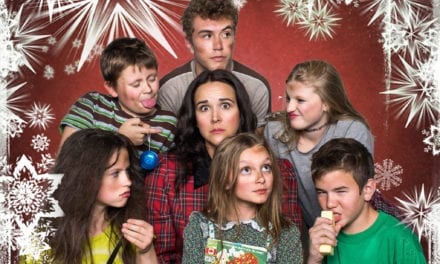 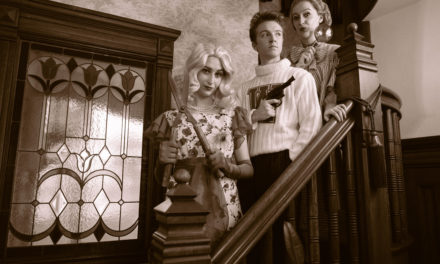 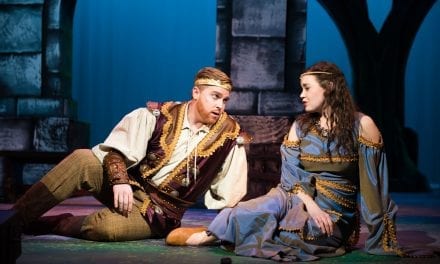