SALT LAKE CITY — La Traviata, or “The Woman Who Strayed,” is a story overflowing with emotion and tragedy nestled in an intimate and straightforward plot. It is based on La Dame aux Camélias, a play adapted from the novel by Alexandre Dumas, and has been controversial from its first performance. Giuseppe Verdi then expressed Violetta’s tragedy and society’s hypocrisy in music and Francesco Maria Piave wrote the Italian libretto. Utah Opera has brought us a captivating production at the beautifully renovated Capitol Theatre.

The story centers on the courtesan Violetta Valéry who is more than she seems. She first appears to sparkle with gaiety at a Parisian party celebrating her recovery from a foreboding illness. Her life in Act I is extravagant and pleasure-filled until she meets Alfredo Germont. Through their true love, Violetta strays from the path of a courtesan to a new life in the quiet country where she is free, powerful, and happy at the opening of Act II. Giorgio Germont, Alfredo’s father, comes to visit and put an end to their fairy tale, reminding her that men will not forget or forgive her past. He convinces her to give up Alfredo and their happiness for the family’s honor. Showing her strength of character, she returns to the demimonde, the Baron Douphol, and society’s cage. But Alfredo refuses to let her go so easily and follows her to Flora’s party where he clashes with the Baron, wins a lot of money at cards, and reviles and humiliates Violetta—much to his father’s shock and disapproval. When Act III opens, Violetta is dying from consumption.  She is clinging to a letter from Giorgio that promises he and Alfredo, who now knows the truth of Violetta’s love and sacrifice, will return. They arrive just in time for a beautiful but tragic goodbye. 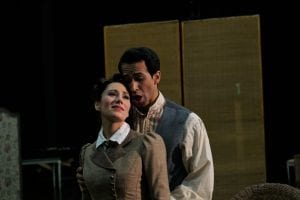 Utah Opera’s production of La Traviata hit all the notes of passion, tragedy, love, and sacrifice. From the first haunting melody of the strings in the Prelude that hint at pain and redemption to the foreboding brass and tragic timpani drum rolls of the Finale, Utah Symphony’s performance was gorgeous. In this production, however, the orchestra had to share the stage with members of the Ririe-Woodbury dance company during the Prelude and other numbers.

It was different and fresh to see dancing during the Prelude, although modern dancers dressed in 19th century Parisian formal wear was a little jarring and perhaps too modern at times. But the choreography had the overall effect of intensifying the music of the Prelude and further pulled me into the story. With the party goers frozen and in the background, the dancers seemed to be foreshadowing that there is more to Violetta and this lifestyle than meets the eye. 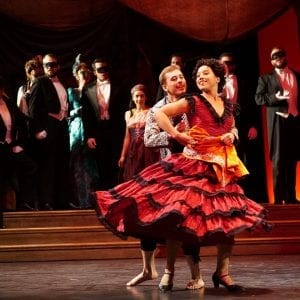 When the second song, “ Dall’ invito trascorso è già l’ora,” the chorus, the set, the lighting, and (of course) the amazing Utah Symphony conducted by Steven White, all combine to create a festive spirit. The chorus was a strength throughout the production, adding so much life and setting the energy for those scenes. The well-balanced, leveled set by Peter Dean Beck created a solid backdrop for the drama, particularly the windows. Lighting designer James Sale used the windows beautifully in every act, but particularly during Act II’s party scene and all of Act III.

I liked how this production gave Violetta, played by Anya Matanovič, more personal power in her tragic circumstances through the directing, acting, and costume design. In Act I, Violetta’s dress is a powerful red. And although she has moments of sickness, Matanovič still commands the room. Matanovič moves with purpose and confidence throughout the opera, from the way she takes off her shoes to organizing her papers in Act II. 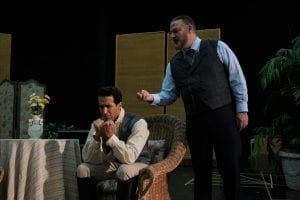 Director Garnett Bruce made the most of every aria. For example during “Ah, fors’ è lui che l’anima Sempre libera degg’io,”  Matanovič sings with such youthfulness, depth, and skill. But she isn’t just standing there singing, which she did phenomenally. The ornamentations and high notes were light and clear. She also used the whole set and props to tell a story with her movement as well as song, acting the changing emotions of the conflicted Violetta. Matanovič sings so many difficult notes in the cadenza while effortlessly pouring herself a drink. The effect added so much intensity to the scene. Every aria and duet was treated with the same thoughtfulness and executed really well.

I was delighted to see such solid acting and chemistry from Matanovič and Rafael Moras (the latter playing Alfredo). Moras’s presence filled the whole stage as he sang about his secret love in Act 1. His voice was velvety and youthful when he sings the word, “misterioso.” It was sincere and poignant. The chemistry between Matanovič and Moras was not just believable, but touching and passionate, which helps to augment the drama when Alfredo is so angry with Violetta and she is so heartbroken in Act II.

Michael Chioldi’s performance as Giorgio Germont brings much to the character of Alfredo’s father. The moment he enters the stage, he sings with the commanding power and purpose of a protective father. He is appropriately stiff with Violetta throughout their singing in Act II. As the character softens towards her, so does the vocal tone and blend between their voices. Their chemistry grows during Act II and blossoms in Act III. However, the chemistry between Giorgio and Alfredo is more stilted, because the audience first sees them together when Alfredo is already in an agitated state. Still, I would have liked to see more from Moras in establishing their father-son relationship. Chioldi’s vocal tenderness during his aria to Alfredo was lovely and a nice start. One powerful father-son moment is at the end of Act II when Giorgio sees the folly of his son and sings such disapproval that Moras shrivels as the curtain drops.

Throughout the evening, the singing was a delight. I especially love how all the singers achieved depth and maturity, displaying musical skill and control, while still having a brightness and clarity in their tone. Something about the Capitol Theatre’s acoustics, the sound technicians, and the orchestra made the sound feels so intimate even from high up on the mezzanine. There were only a few times when the brass from the orchestra overwhelmed an aria by Matanovič and Moras. Chioldi’s strong voice did not have this problem as often. He also synergized with the orchestra’s dynamics, such as playing off their marcato during “Un di, quando le veneri” to Violetta in Act II.

The scene design, lighting, and Ririe-Woodbury dance company excelled again during Act II. Moroccan lamps, middle Eastern rugs, and large Arabian-flavored textiles hung from the ceiling. The light was warm and exotic against the scrim. I love the partnering of the gypsy female dancers and the way they executed lifts. But where the Ririe-Woodberry dance company really excelled was during the “Chorus of Matadors.” The three matador costumes were stunning. The choreography was grounded, robust, and very entertaining. I think the dancing in general could be improved with more polish, but as I’m not as familiar with modern dance styles, I can’t quite say how. It seemed at times that the dancers weren’t in sync, such as with some turns and leaps.

Act III opens with a reprise of the melody in the Prelude and the dancers back on stage. It contains Violetta’s final moments as she waits painfully and pathetically for Alfredo. The lighting again creates the right atmosphere, streaming through the windows at times or being dark and dreary depending on Violetta’s emotion at the moment. It is a difficult scene to stage because it is just so sad and ends so suddenly. Some beautiful moments include Matanovič’s voice catching and breaking when over taken with pain during her song, Alfredo and Violetta singing beautifully on the bed with light pouring in through the windows, when Giorgio fully embraces Violetta showing his acceptance of her,  or the heartbreaking moment while they are on the floor holding each other, realizing all that they’ve lost, singing about wanting to live. When Violetta suddenly dies, the orchestra swells and the powerful brass washes over the scene for a dramatic end.

I would recommend Utah Opera’s thoughtful La Traviata to any opera fan and anyone willing to try out the genre. There are so many things about this production that make it more accessible to a wider audience, such as the clear vocals, the solid acting, and the modern dancing. These performers make Verdi’s music a delight to the ears. But it is the whole production that makes the story come alive and held me rapt, inspiring a feeling that a recording can’t replicate.