SANDY — Hale Center Theatre’s A Christmas Carol was as classically Christmas as I could imagine. The elaborate decor, overwhelming costumes, and the actors’ performances were all a joy to see.

Because this was my first time in the Hale’s new theater, I didn’t expect such richness just from the front door to my seat. The carpets, vaulted ceiling, and staff looked so nice I thought I had entered a private club and would be kicked out for not wearing a ball gown. Fortunately, I made found the Jewel Box Theater without arousing suspicion. I loved how the seating was so steep, every seat provided a nearly perfect view. As my companion and I were weated above the stage in the back, this was important. The proscenium stage jutting out was blocked by a long red satin curtain, and as it rose for the beginning, I was expecting a Broadway show because of the opulence. I got something close, because the performance of A Christmas Carol was delightful. The director, John J. Sweeney, challenged himself and the production staff to make something unique this year, to add a twist to the Hale tradition of mounting the show every December.

​I loved the costumes (designed by Kristy Draper), specifically of the spirits. The Ghost of Christmas Past (played by Elle Brimhall), was covered in white and pearls, her hair all done up with intricate white beads. Brimhall, though a child, was able to speak in a way to give that eerie feel of a spirit communicating with a mortal realm. The Ghost of Christmas Present (played by DRU) was decorated in the fuzziest looking red cloak I’d ever seen. (Even Santa would be jealous.) I also adored his ornate staff which he used to make magic happen. DRU also provided the laughing introduction before the show started, which set the mood for a merry night. The Ghost of Christmas Past (played by Patrick Hawkins) was covered in black and sliver cloths, all draped disorderly around him and covering his face. Hawkins was either very tall or on stilts and thus walked with a wavering gait that added to his wispy look, as if he was still coming into being. He had sparkly silvery armor over his forearms and hands, which enhanced his pointing to Scrooge’s grave. 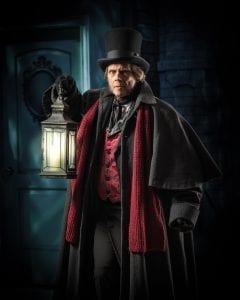 Kacey Udy created the set, and it was phenomenal. With such a large stage, it was easy to fit large walls, like the front of Scrooge’s shop with its cobble stone walls and rounded windows. I loved the set piece Udy used for the inside of his mansion, and the chair that rose in the air was very startling, so I appreciated it’s sudden movement upward in providing that surprise. However, I wish the technical crew had only used it once, as the second time seemed hollow, as if the technical director didn’t want to do all that work to use a special effect only once. I also loved the Christmas decor, like the golden and red apples in wreaths hanging from the ceiling with burn orange ribbons for Old Fezziwig’s house. Or the bright red poinsettias on the wreath and tree in Fred’s home.

Marilyn Montgomery‘s fun and inviting choreography was a joy to watch, as the women danced around the stage in beautiful wide skirt dresses. My favorite part of the show was when the couples were all dancing together a Fred’s party. Fred was played by Spencer Hohl, and he was so good at transitioning from his other role of Charles Dickens (the play’s narrator) to friendly Fred with his contagious laugh. Hohl had a catchy voice that was easy to follow in Dickens’ old style writing, which made me think he would have been the perfect Charles Surface in The School for Scandal. I also really enjoyed Shawn Stevens’s performance as Ebenezer Scrooge. He had the giddiness near the end that I picture when I read the book, and his laughing at himself while trying to be his usually tyrannical self was priceless.

The only thing I have to say I didn’t like was that overall the music, though beautiful and enjoyable, was distracting from the show. An example was when the poor woman is singing to her baby, which was sweet for the first half of the song, but the rest seemed like overkill. There was also a short moment when one of the girls laughed her head off at Fred’s party and acted the fool. It was a contrast, surely, but not necessarily a choice that brought value to the show.

Still, so many elements of the production came together so nicely in general that I felt very “spirited” from watching Hale Centre Theatre’s new production of A Christmas Carol. The spirit of Christmas was emanating from the acting, set, costumes, and dance, that it was impossible to remain as Scrooge began, still saying “humbug!” I left with a light heart. Thanks for the Merry Christmas, Hale.

A Christmas Carol plays daily (except Sundays) at 5 PM and 8 PM through December 24, with matinees on Saturdays and December 20-24 at 11 AM and 2 PM in the Jewel Box Theater at Hale Centre Theatre (9900 South Monroe Street, Sandy). Tickets are $21-49. For more information, visit hct.org.