OREM — Like many others of my generation, I grew up loving the film Newsies staring Christian Bale. However, I hadn’t a chance to see a live production of this beloved musical until this last weekend when I attend Disney’s Newsies, directed by Michael Carrasco, at the Scera Shell Theatre. I have had the opportunity of seeing several stellar season opening shows at the SCERA Shell Theatre and so I had high hopes for this production. The show didn’t live up to my feelings about the film, there were so many good things to enjoy in this show. I expect that the production will only improve as its run continues.

Newsies follows the story of newspaper boys at turn of the 20th century in New York City as they go on strike when the cost of newspapers goes up, thereby cutting into their profit margin. Led by newsbody Jack Kelley, the boys stand up to Joseph Pulitzer, one of the most powerful men at the time, as they form a union and fight for their meager livelihoods. Their struggle is chronicled by the local reporter Katherine, who has been hunting for a story that can serve as her break into hard news. With music by Alan Menken, lyrics by Jack Feldman, and book by Harvey Fierstein, it is a fun show featuring a young cast of performers.

Jack Kelly, played by Paul Cave, was a solid dancer and had some strong moments interacting with the other characters on stage. His pitch in his opening solo “Santa Fe” seemed to suffer a bit in the attempt to maintain the character’s dialect. However, his singing was a strength definitely in his duet with Davey (played by Cole Souza) in “Seize the Day” and his duet with Katherine (played by Avonlea Simons) in “Something to Believe In.” I very much enjoyed the flirtatious and straight forward moments and chemistry between Jack and Katherine in the rooftop scene in Act II. Jack’s moment of questioning Katherine about if there was something between the two of them made me grin because it was honest and to the point. I love real moments like that. It was mushy, it was real… and being funny was a perk. 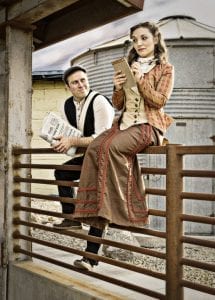 As Katherine, Simons was definitely the stand out singer in this production. Even when her mic accidentally cut out in “Watch What Happens,” I could still hear her singing with a powerful voice that left chills. Her stage presence was strong as well. There were a few moments when I felt that the character was a bit too stereotyped princess-like, but I decided that was more of a script issue than a director or performer issue. I enjoyed the fun, goofy moments in “Watch What Happens” as Katherine’s insecurities were revealed and she became a young girl eager to do well instead of a tough reporter like she’d been portraying to Jack. Another moment I enjoyed was when Katherine tells Jack that he and Dave had both already had ideas, but that she had an idea that was going to really bring in the final win. The grin on her face as she held out the paper with her idea to Jack was priceless. On thing that I really enjoyed about this interaction and many other moments with Katherine is that it really brought to mind that these character were still young kids. There was a hopeful optimism that came in these moments that showed that they were not beaten down by life like so many adults would have become in their situations.

Medda Larkin, played by Rachel Ricks, had a solid and strong voice that made her performance of “That’s Rich,” one of my favorite scenes in this production. She understood the comedic timing of the song and was really able to emphaisze that. Her voice, coupled with a great stage presence, endeared Medda to me, and I could see why Jack enjoyed her so much as well. She had a motherly quality that made her a champion of the motherless newsies. Additionally, Souza was outstanding in his performance of “Seize the Day” and “King of New York.” Once he started singing the energy of the production really took an upswing. Finally, Race, played by Skyler Mann, had short moments they left me wanting to hear more from him. I love being surprised by the supporting cast, and Mann was able to do just that, especially in “King of New York.” 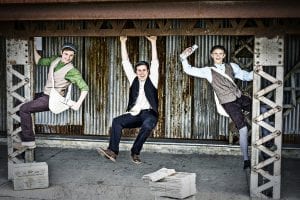 Newsies is a show that screams for a solid choreographer, and Tyne Valgardson Crockett fit the bill. I loved the use of levels on the stage to showcase the dancing, especially during the “King of New York” tap number, where the deli tables were used as a dancing surface. “Carrying the Banner” had a good mix of movement from the dancers while other performers create smaller vignettes. I was impressed with how well even the youngest dancers were keeping up with the high energy choreography. The choreography for this production did not disappoint.

The unit set, designed by M’liss Tolman, used a good variety of textures and colors in the mix of brickwork used for the different buildings. These oranges and reds colors complemented the dark blue green sky over the cityscape silhouette used for the main backdrop. The use of greens in the brickwork and window frames and the blue grays on the buildings fire escapes helped tie the buildings in the foreground to the blue greens in the backdrop and helped the eye seamlessly wander throughout the entire design. 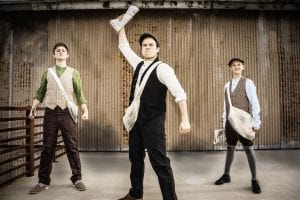 There were a few things that distracted me during the show. One was a small bright blue light, perhaps on a speaker,  that could be seen in window below Jack’s rooftop home. Additionally, during the “Once and For All” number when the newsies pull out newspapers that have electric lights all around edges. I could understand some possible thoughts behind this choice: to emphasis the new papers, to add light where the performers were in the aisles, to add some pizzazz to the scene. However for me it distracted from the reality of the scene, and felt a bit cheesy in contrast to the seriousness of the scene. Finally, is also important to note that the SCERA’s production ran smoothly through the opening number, but the energy and pacing of the second act was stronger present than in the first act. Perhaps opening night jitters held the performers back.

Nevertheless, the SCERA has an enjoyable production of Newsies that believe it will only get better as the run continues. There are some strong performers and great choreography and set. Make sure to check the weather before you attend and bring extra layers, just in case. We were prepared for the forecast weather, but the wind chill made the evening more chilly than expected. But don’t let the cold keep you from enjoying the night out. Rather, use it as an excuse to cuddle up next to a date under the stars while watching a fun production of Newies at the SCERA.