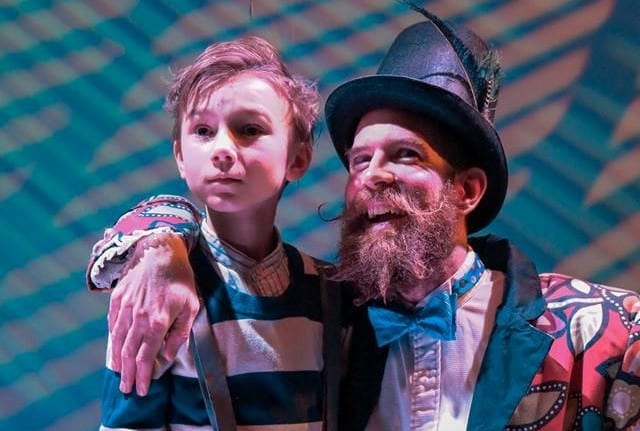 SOUTH SALT LAKE CITY — Utah Children’s Theatre’s James and the Giant Peach under the direction of Joanne Parker is grotesque fun (and that’s meant as a compliment). An adaption of the novel of the same name written by Roald Dahl, the play retains its quirky, and downright weird, sense of humor. This dramatic retelling combined with over-the-top physicality on stage and intimate spectacle makes for a fun night (or afternoon) at the theatre with kids. If Dahl’s 1961 novel isn’t familiar, perhaps it is all the better. Timothy Allen McDonald’s book for the musical departs significantly from the original in the main conflict. In the play, James is orphaned after his parents have an unfortunate accident with a rhinoceros that has escaped from the London zoo. After a brief stay in an orphanage, James is sent to live with abusive aunts in Dover who quickly make him their slave. One day he is approached by a man who encourages him to drink a potion, but that potion spills on the roots of a barren peach tree that then grows an enormous peach. James’s aunts, Spiker and Sponge, attempt to make money off of the giant peach by making it a tourist attraction, but James foils that idea. He finds a doorknob leading into the peach and, once there, makes friends with the various bugs already inhabiting it. The peach then breaks off the tree branch and rolls into the sea, crashing into Spiker and Sponge in the process. While in the book this collision leads to the demise of James’s aunts, in the play they survive and continue to be main characters in the drama as they seek to regain the peach from James. Other antagonists in the drama include the sharks that surround the peach in the ocean and the seagulls that threaten both the fruit and its inhabitants. However, with help from his bug friends, James is able to harness the power of the seagulls to make the peach airborne and to transport it to New York City where it ultimately lands on the top of the empire state building.

As is evident by the synopsis, the tale in the play is tall—giant, even—and requires some fantastical imaginings on the small(ish) stage at Utah Children’s Theatre to bring it to life. With James Parker at the helm of set and light design, these imaginings work well. The stage is turned into a traditional raised thrust with a gap (six-inches or so wide) between the edge of the stage and the border of the stage, on which sits the Victorian-looking lights. From this gap, various puppets, signs, and other props emerge. Similarly, various trapdoors on the stage are used for the same purpose as well as for character exits and entrances. The other notable design element that brings Dahl’s weird world to life is the projections on the back screen. Although projections are so commonplace in the theatre that it almost seems rare to see a show without them, these projections are a well-utilized visual contribution.

With such a fantastical set design, director Joanne Parker plays up the meta-theatricality that is inherent in the play. The company’s opening number, “Right Before Your Eyes,” is sung directly to the audience, and at other times the play points back to itself as a dramatic work. There are no efforts to disguise the workings of the puppets. Furthermore, the spectators are encouraged to enter into the “fiction” of Dahl’s story and the process of creating it onstage when they watch the characters post large signs announcing the location of each scene. With expert precision, the actors portray the characters from the world of James and the Giant Peach. British dialect is spoken by all (there are only a few times where the dialect might be a barrier for younger audiences), and the words are supported by larger-than-life physicality from all of the actors. Ricky Parkinson as Ladahlord, who acts as a type of narrator for the play, uses his height to its full advantage, and it almost seems as if Ladahlord creates and controls the world of the play. Brighton Nicole Sloan as Aunt Spiker and Crystal Ahlemann as Aunt Sponge are the ultimate stereotype of grotesque yet comical villains with their silly slapstick and facial expressions. Then there are the bugs. Whereas in Dahl’s novel the bugs are anthropomorphic, meaning the bugs take on human qualities, in the play, the characters on stage are human taking on bug qualities. It is mainly their costumes, designed by Julie Anderson, that hint at their species. Ladybug wears a red dress with black spots. Spider wears fish net stockings. Grasshopper has wire antennae coming from his top hat. Centipede has small leather straps attached to his costume from top to bottom on each side. Some of the bug actors also give physical references to their bugs, but none more so than Brinton M. Wilkins as earthworm, whose “worm” across the stage brought giggles from the audience. Wilkins also gives a stand-out performance with his part in the number, “Plump and Juicy.” I would be remiss not to mention the young Eli Stebbing as James. In a play so well performed by adult actors, Stebbing owns his part, conveying both glee and pathos throughout the performance and striking a chord when he sings, “On Your Way Home.”

The songs in the play were written by Benj Pasek and Justin Paul of The Greatest Showman fame (not to mention Dear Evan Hansen and La La Land). These songs aren’t the type to necessarily stay in the head after leaving the theatre, but they do inform the story and the characters in a way that is accessible to kids. Choreographer Marilyn Montgomery assists in helping the kids make connections to the stage. In one number, the characters are hilariously “flossing.” In addition, there are surprise elements that come from the ceiling on two different occasions and bring exclamations of glee—I won’t give the surprises away, but they are fantastic additions to this production.

Last but not least, I would be remiss not to include the supporting elements of the whole theatrical experience at Utah Children’s Theatre. The theater owns a soda shop attached to the building, and for every show, custom desserts are made to match the show’s theme. For this production, various peach desserts, along with traditional chocolate and vanilla sundaes, can be purchased to have ready for pick-up at intermission. Additionally, I was just introduced to their birthday party room (also attached to the theatre) where, for an additional fee, characters from the show can entertain birthday guests. While this room might seem like just another way of raising funds for the theater, I thought the birthday party room was brilliant because such an experience assists in introducing kids to the local theater community from which we all benefit.

On Saturday afternoon, I brought a nine-year-old, a seven-year-old, and a five-year-old, and they all loved it (the only complaints were brought forth by my nine-year-old who is a story line purist). With so much going on in the play, so much visual interest on the set, and a good dose of actor-audience interaction, the production is great for kids of every age that adults will also love. 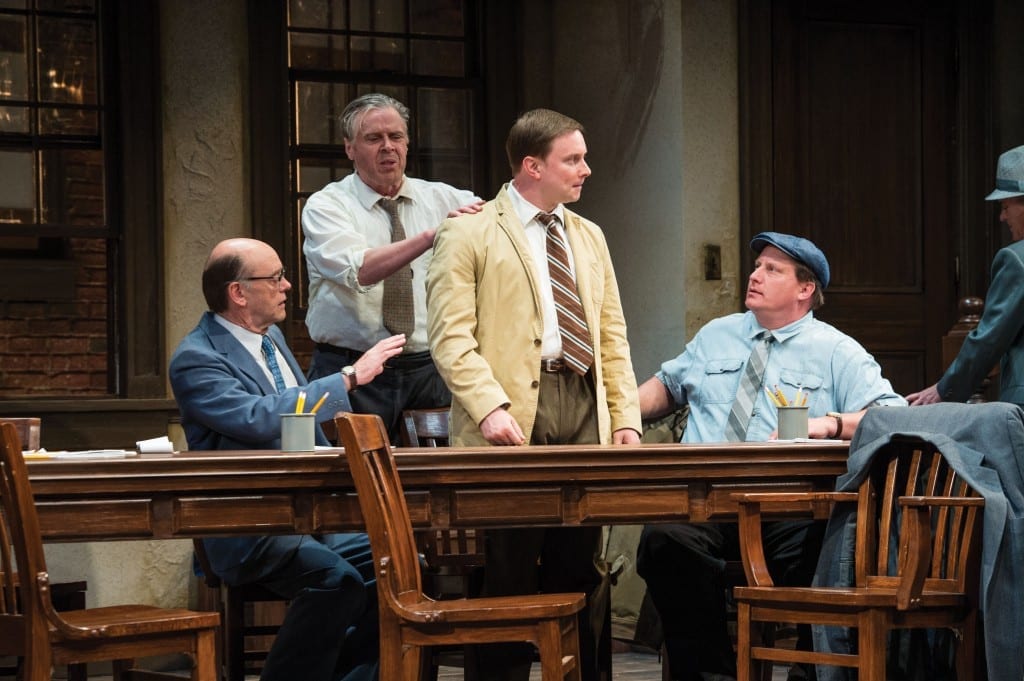 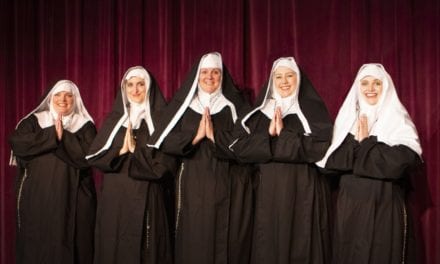 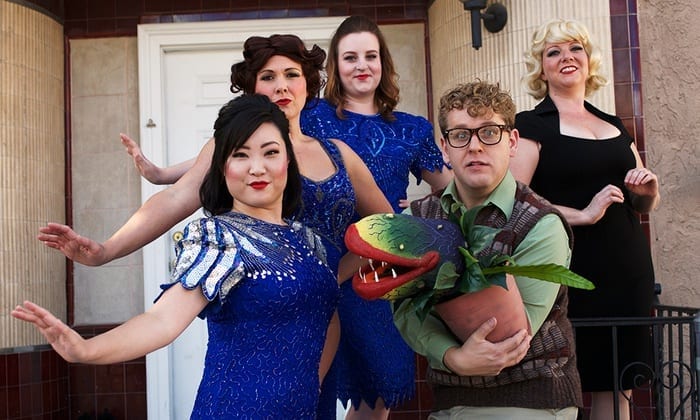 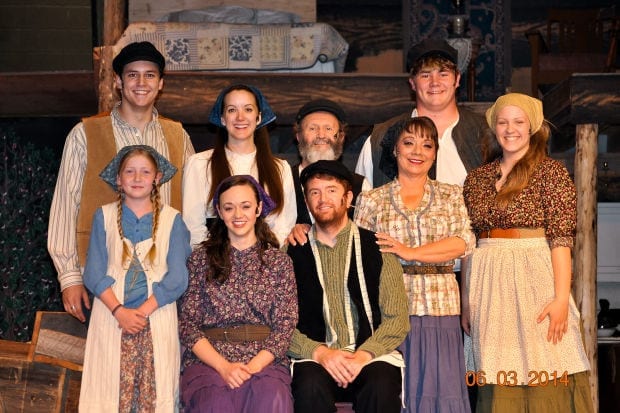