SALT LAKE CITY — “The whole point of being alive is to make some noise!” exclaims Zelda Fitzgerald mid-way through Kathleen Cahill‘s new play, Silent Dancer. This collaborative dance and theatre piece, directed by Salt Lake Acting Company’s own executive artistic director, Cynthia Fleming, with original choreography by Ballet West’s Christopher Ruud, is making its world premiere. It tells the story of Rosie, a poor New York hoofer who dreams of stardom on the silver screen. Rosie’s story, complete with gangsters, romance, film sets, speakeasies, and Zelda and F. Scott Fitzgerald themselves, imagines a 1920s so vibrant, alive, and small that with a bit of grit, and even more gumption, the biggest dreams can come true.

There is an old idea in musical theatre that when speaking isn’t enough to convey emotion, characters must sing. This play is an experiment to see if the same is true for dance. The production uses movement in conjunction with and in place of dialogue in moments of heightened emotion. When a character becomes too frustrated, scared, or infatuated, they must move to be understood. It is an interesting experiment, but ultimately a few factors hold it back from success. The primary factor is silence. Jennifer Jackson’s sound design and the original music she created for the play are delightful and perfectly fitting when they appear, but the stark absence of sound in critical moments of emotion leaves the action feeling deflated rather than escalated. In traditional musical theatre, the soaring melody and orchestrations both guide and root the audience in understanding the emotional grounding of characters, scenes, and story arcs. This play instead left me dangling in silence as the actors explore gesture.

While to some degree physical movement can be universally understood (a turned back, a reach toward), Ruud’s choreography is seeking a balance between gesticulation and full dance. It employs harsh lines, repetitions, and isolated body movement that, while interesting, feels disconnected to the other 1920’s social dance that is so much a part of these characters’ lives. There are also missed opportunities to connect and explore more deeply within the confines of the story. For instance, Zelda mentions that she studied ballet, but there is no reference to her training in her moments of dance. The silence and demanding modern dance style placed an enormous burden on the actors who needed to be both extraordinary dancers as well as actors to succeed. Cahill’s dialogue presents poetically, particularly during these movement sequences. However, the lines struggle to lift off the page while the actors give their best to move through silence and speaking. Too often the dialogue slips into sounding stilted and unfeeling. The lack of music is particularly challenging for Darrell T. Joe, as Perry, Rosie’s romantic interest. His is a complicated character with strong emotions as a black musician in love with a white dancer. Again, it’s a lost opportunity to have a character who is a genius song writer try to communicate through movement rather than through his natural gift. William Richardson as Rosie’s war-rattled brother, Michael, and Austin Archer as the local bootlegger, Legs, both succeed more fully at the task of enmeshing character with movement. Richardson has the standout dance moment of the show when Michael is given the freedom to perform for an adoring audience. Archer, playing our villain, menaces his way around the stage, making great use of his facial and vocal expressions as well as his choreography. Mikki Reeve as Rosie and Alice Ryan as Zelda are both fun to watch but succeed more fully in their text work than their dance numbers. The pair are a riveting enough duo that a play solely focused on their relationship would have been enough. Indeed, the narrative structure seems to overreach. Rosie is continually interrupting her own story to share soliloquies about other characters’ fates. There is also an unfocused gaze applied to some of the darker plot points (murder, racial and sexual violence) that increase the difficulty in connecting emotionally with the characters.

The razzmatazz of the production’s design elements is charming. The combination of projection and the open thrust stage by the scenic design team of Dennis Hassan and Joshua Roberts transports us from one New York location to the next. The action flows seamlessly from low-class speakeasies to elaborate luxury apartments. Sumptuous detail for each location is filled in by Janice Jenson’s prop design. Costumes by Nancy Hills are appropriate, functional for dancing, and attractive. The lighting design by Michael J. Horejsi is inventive and exciting, and the strong ensemble of smaller roles works hard to keep the action moving forward.

Silent Dancer has been a pet project in development at Salt Lake Acting Company for years. It has clearly been a labor of love, and I applaud its experimental attitude and risks. I’m sure the experience will shape the work of its creators for years to come. 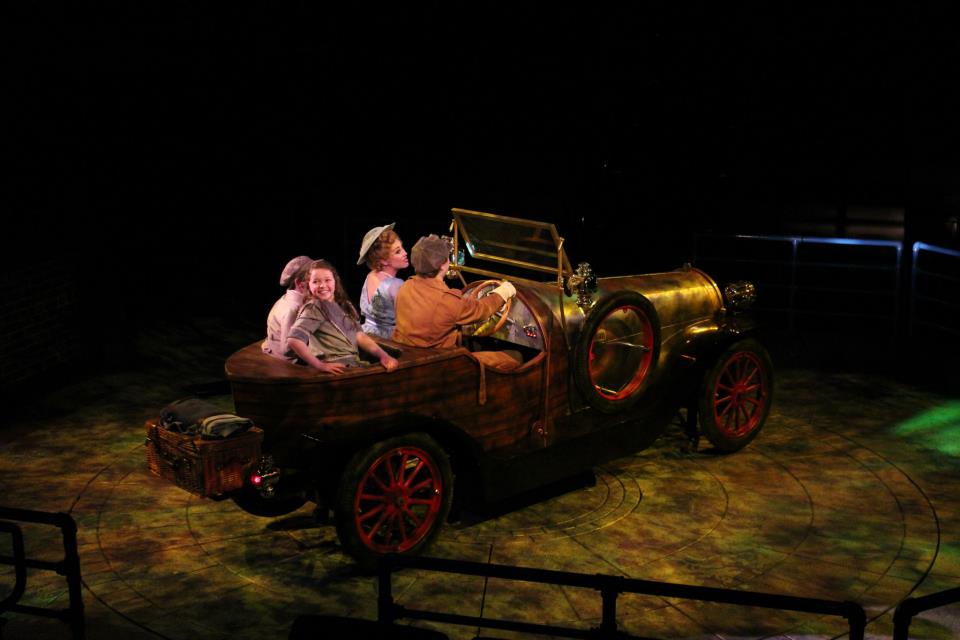