​CENTERVILLE — Centerpoint Legacy Theatre‘s production of Chitty Chitty Bang Bang was a blast. They had a great cast, fun costumes, and the car even flew! I would love to take my 5-year-old to see it, because it seems to be great for her age as well as mine.

This play, written by Richard M. and Robert B. Sherman and adapted for stage by Jeremy Sams, is the story of a magical car that a single father and his kids are enamored by. As they work hard to get the money to buy it, the evil leader of Vulgaria sends his henchmen to steal the car once it is restored. The family fights to get it back with the help of Truly. Grandpa gets captured, and later so do the kids, and the couple Caratacus and Truly fight to save them and to restore Vulgaria to the suppressed children. But they have to watch out for the Childcatcher. It’s a fun story, albeit a bit strangely put together. When Caratacus is successful selling his sweets invention, he still doesn’t have enough money to buy the car, but then he sells another invention for the exact price the car costs. It made me wonder how much he made on the sweets and where all that money went. 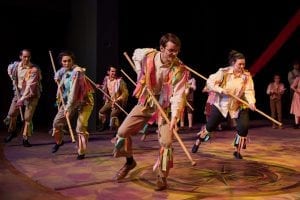 The set, designed by Scott Van Dyke, was simple for some scenes, with the run-down car looking small and rusty, and other scenes had elaborate pieces like the toy shop with the decorative doorway and shelves of handmade toys. I especially loved the way they styled the music box Truly sings in and how the show starts with old time black-and-white film clips showing on the drawn curtains. It got me in the mood for seeing an old-timey fun show.

The costumes, done by Jeana Forthman and Nita Smith, were perfect for each character,and helped me get a feel for how different the show’s world was from reality. The Vulgarians were dressed more crazily to reflect their dictatorship atmosphere and the goofy personality of their leader. Even the guards were in bright yellow uniforms. I loved the Childcatcher’s costume, which had a dark trench coat and hat, coupled with creepy makeup to hollow out his cheeks. Truly’s costume for the music box dancer was perfect. It made her look exactly like a toy, and the intricate staccato movements she did, choreographed by Bailee DeYoung, were timed perfectly and completed the illusion. DeYoung made the cast look so good in all the dances, and I especially liked the movements in, “Toot Sweets,” where the whole cast was onstage singing and dancing with the focus on the whistles each person held. 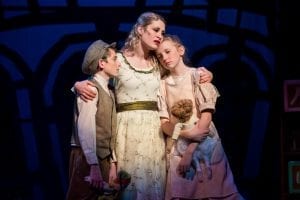 The director, Jansen Davis, did a great job with adding little things to make the story flow well. When the car falls off the cliff, the people in it rise up with arms flailing which made it look like they were really falling. Little details like flailing arms in a car supposed to be falling made the show flow. One part I wish the director had changed was when Truly sees the Childcatcher taking the children away. Instead of chasing them, she runs right to the sewers. It didn’t seem in line with her character with how caring she had been of the children and how daring she was. Perhaps the Childcatcher could have left a trap for her so she couldn’t chase him.

David Simon playing Caratacus Potts was phenomenal. He had a fantastic voice with his great characterization and was relatable. His lullaby to his kids was one of his best moments. It was so sweet and loving, and I could also see the sadness in him as he missed his wife during the song. Trevor Hansen was so evil playing the Childcatcher, and I appreciated it so much because it brought me back to my childhood fears and helped me mentally face and overcome them as he was defeated in the play by a group of kids. 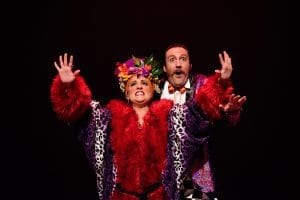 Shanda Christiansen played Truly Scrumptious well. The light airy tone in her singing voice was beautiful, and I appreciated the way she and the children interacted, which made the story line work well. Chad Wilkinson was a wonderful Grandpa Potts, and his attitude of not completely understanding what others were saying and turning it into something else, even in song, was hilarious. When the kids were with him, they all looked so happy together like a real family.

The kids amazed me with their skills. Abigail Bennett, playing Jemima Potts, had great presence on stage, and I loved her singing voice. Colby Thornton, playing Jeremy Potts, was easy to love and spoke so confidently. Bennett would often dance and jump for joy, a sweet characterization for Jemima, and Thornton would really get into the emotion of his lines. They made the moment where they were being taken away by Hansen a truly heart-wrenching moment that they performed well.

Despite the erratic story line, I enjoyed the show and was able to overlook some of the loopholes in the plot. Chitty Chitty Bang Bang is fun for the whole family and is a crazy story with beautiful music and bouncy, unforgettable songs that made me want to jig to in my seat. Take advantage of the opportunity to come see it done so well at Centerpoint.