A story of the dead full of life in BLITHE SPIRIT 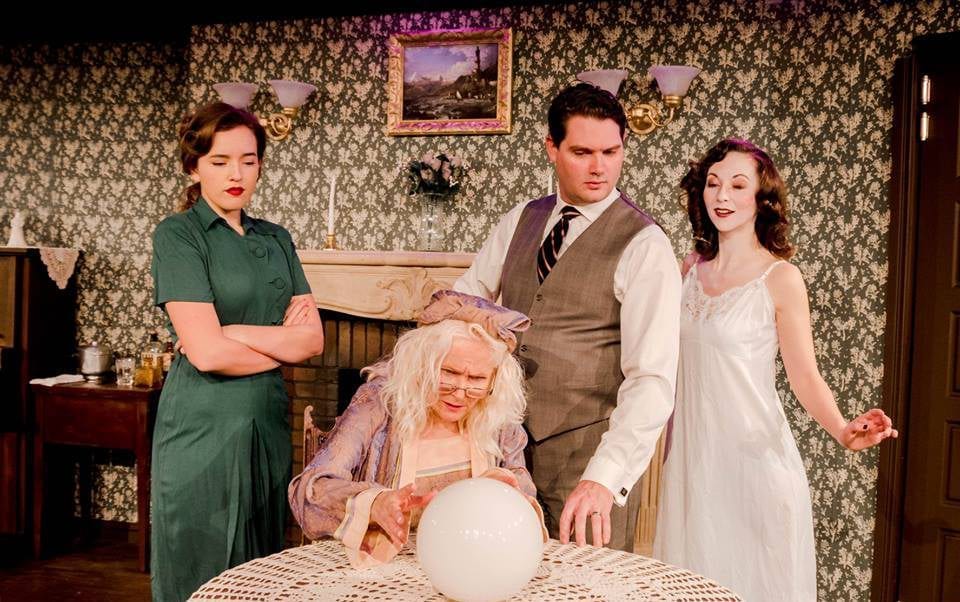 PROVO — Set in 1940’s England, Blithe Spirit tells the tale of Charles and Ruth Condomine, who have only been married for five years. Charles is writing a book about a homicidal medium who tells peoples fortunes and leaves murder in her wake. To help understand this superstition more, he invites Madame Arcati to lead a seance with his wife and friends. Unbeknownst to Charles, and due to his recent conversation about his late wife, Elvira Condomine, “someone wishes to speak with those present at the seance.” Elvira doesn’t quite like her living replacement, which causes chaos for Charles who is the only one who can see or hear the new guest. The question then becomes: how does Elvira get back to join her “passed on” friends, and how does her jealousy get in the way? Written by Noël Coward, this play was composed in response to the fog of WWII slowly spreading throughout Europe and the world. WWI had been rough and gloomy, yet there was no world peace to ease the wounded hearts. Coward sought comfort from the dark times in laughter. The script was well written and had many comical points where I could not contain my laughter. However, most of the script was slow to get through and I often found myself counting the scenes to see how many were left, not due to poor writing, but mostly to the writing of the times, back before brevity was sought after in scenes and in conversations.

The slowness could have also come from the stage directions. This Covey Center for the Arts production, directed by Jarom Brown, had both moments of excitement and lack of concentration. The first scene was mostly directed with the actors pacing around the small blackbox theater, straightening and reorganizing the same props over and over again. While the script offers only so much to propel the story forward, the blocking in these long-winded scenes could have been more creative and constructive, possibly providing a more interesting visual for the audience to follow. My favorite moments of staging were with the poltergeist and the Condomines. These instances were created with many powerful compositions highlighting the three actors and their competing power struggles. These well-orchestrated scenes were exciting and interesting to watch, helping to move the story along. Heidi Scott as Madame Arcati and Adam Argyle as Charles.

The sound design by Robert Seely was delightful and consistently included songs from the 1940’s during the scene changes. Seely’s sound design shone in the way the fake gramophone seemed to have music coming from the sound horn itself. I could not find a hidden speaker anywhere nearby to ruin the illusion, and the sound came from that area and not other speakers throughout the theater.

The lighting design (done by Pam Davis) and prop creation, a team made up of Jessica Moody, Rem White, Sophie Tuckfield, Kelty Heppler, Spencer Powell and Michael Larson, was well executed. Between the cucumber sandwiches and the self-playing piano, the lighting and prop team worked well together. The individual lights on the wall above the fireplace would flicker to cue the audience of the supernatural entrances. Davis also provided surprising lighting with a glowing crystal ball that shone when the house lights went out. A notable mention goes to the prop team, who rigged set pieces and props to come alive in response to Charles’ lines. Altogether this was a well designed production that left me with chills because of the lighting and props.

My favorite part of the designs were the costumes, more specifically for Madame Arcati and Ruth Condomine. Both had intricate and color-themed outfits that left me analyzing what the significance meant. Madame Arcati wore two outfits, both purple, which is often related to magic and mystery. Although this character had many comical moments, her costume hinted at the possible powers she possessed to bring back the dead.

With Ruth’s costumes, the designer Ashley Magoffin stuck strictly to the color green. This was very obvious against the green background, but left the mind to wonder if the green represented jealousy. As the play progressed, it was clear to see that Ruth’s green was associated with growth, life, and safety as she was often the one trying to heal the wounded hearts, resolve the problem, and grow within herself. Although these were the specific designs that were obvious to me, all of the costumes helped enhance the personality of the characters.

Adam Argyle, who played Charles Condomine, played an interesting character. Charles is both loving and jovial while also having a quick temper that was evident throughout the scenes where he fought with his wife. Arglye played Charles with the perfect balance of kindness and pride to emphasize these points and provide a well-rounded character for the audience. Liza Tomkinson as Elvira and Adam Argyle as Charles.

Madame Arcati was one of my favorite characters, full of spunk and well comedic timing, thanks to the performance of Heidi Scott. Madam Arcati had the sweetness of a little grandma but also the hopes and dreams of a little schoolgirl who is just learning how to go into a trance to summon the dead. Scott did a wonderful job and always made me smile when she entered the room.

Although Liza Tomkinson played the dead wife, Elvira Condomine, her performance was full of life. She was sassy, sweet, conniving, and hilarious all at the same time. Elvira’s lines provided most of the humor in the story (with the help of interpretation of Charles) and Tomkinson delivered them expertly. She had great timing and almost had a sing-song voice to make me feel as if I could trust her and as if I wanted to run away at the same time.

Ruth Condomine was one of the hardest parts to play in this production, but Madeline McBeth‘s portrayal was incredible. Charles is the only character who can see the apparition Elvira, and therefore the only one who can make eye contact. Ruth was often in the same room as Elvira and, so McBeth had to pretend not to see her. In one instance, McBeth sat right across from Tomkinson and spoke to her, without making eye contact once, providing a convincing performance that she actually could not see the ghost sitting at the same table.

Overall, the play was enjoyable and comical with excellent presentation with props, costumes, and strong actors. Although I enjoyed most of it, the play lasted three hours and left me wondering which parts of the script could have been shortened to help the story move along faster without losing the important facts and relationships. For those who want a good laugh, it would be worth the time commitment to converse with the dead in Blithe Spirit.

Blithe Spirit plays at The Covey Center for the Arts (425 West Center Street, Provo) through March 16 on Thursdays, Fridays, Saturdays and Mondays at 7:30 PM. Tickets are $14-16. For more information, visit their website. 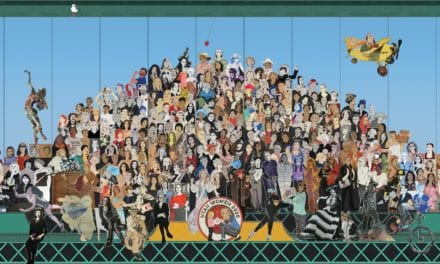