OGDEN — I Do! I Do!, with a book and lyrics by Tom Jones and music by Harvey Schmidt, is a two-person show that was first performed on Broadway in 1966, with the celebrated Mary Martin and Robert Preston in the leading roles.  The show follows a young couple as they first marry throughout the ups and downs of a 50-year marriage. The Terrace Plaza production, directed by Carol Balaich, stars real-life married couple Nick Balaich as Michael and Jamie Balaich as Agnes. 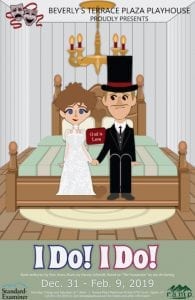 All the music in this production was played by pianist and percussionist Angie Petty, who also served as the music director for the evening.  Live music always makes a more intimate setting and a stronger show, and Petty’s music was no exception. Petty was most impressive in her interactions with the characters while playing the quite difficult score.  I was entertained throughout the whole evening, thanks to her musical interpretation. She also did well working with the Balaiches to ensure that the musical numbers were strong and well thought-out musically.

The set was designed well by Dennis Ferrin.  The entire show takes placed within the bedroom of the couple, which can be challenging for a designer.  Ferrin made the set interesting to look at the entire night, without making it over-the-top. The set consisted of a four-poster bed, chair, bench, desk, makeup table, and bookcase.  The set helped tell the story, from the awkward first night of marriage to the inevitable marital fights, to the struggles of aging, the set invited the audience into the private room of this couple to be a part of their innermost struggles and thoughts. Costuming by Tami Richardson and Jim Tatton was fantastic, from Michael’s fancy suits and Agnes’s beautiful dresses, to the silly nightshirt and nightcap, the costume choices added so much to the fun of the evening.

When a show only has two characters, it is extremely important for the director to ensure that one does not overpower or outshine the other. Carol Balaich did an excellent job directing the couple to balance their own talents and capabilities, and to play up each others strengths. Jamie Balaich did a lovely job playing Agnes, the loyal wife and mother who struggles through serious marriage issues such as fear of new experiences, infidelity, aging, and challenges as a parent.  From her amusing performance as an expectant mother in “Something has Happened,” to the emotional anger and sadness when facing infidelity in “Flaming Agnes,” to the difficult reflections of “What is a Woman,” Jamie Balaich balanced her talent with the emotions of the song with great ease.

When Nick Balaich sang the song “I Love My Wife” early in the first act, his joy, physical comedy, and dance skill were all evident. I was a bit worried that he may have peaked early, but (thankfully) I was mistaken, as his skills wove through the entire show through humorous songs such as “Nobody’s Perfect,” and more serious and reflective moments such as “This House.” Nick Balaich and Jamie Balaich also displayed great deal of love that is the product of performing together for over a decade, as the Balaiches have done. I feel that the performance was amplified by their obvious love and understanding of each other’s talents.

After my praise for the performances and the production of this show, I must say Jones’s script of I Do! I Do! (based on a play by Jan de Hartog) has not aged well. There were moments where the characters’ attitudes and dialogue were typical of the 1960s, but are out of place in the 21st century. The stereotypes of a controlling man and a spendthrift woman were a bit hard to swallow. I appreciated how the cast worked with each other to pay respect to both of the characters and their feelings of stress and challenge with their respective roles. I think it is vital to look at works of art and remember when they were created and what the social environment was at the time, and also remember the social changes that have been made since then.

I Do I Do! plays every Friday, Saturday, and Monday through February 9th at 7:30 PM at Terrace Plaza Playhouse (99 East 4700 South, Washington Terrace). Tickets are $10-17. For more information, visit www.terraceplayhouse.com.