PROVO – Buzzing with recent West End success, as well as winning the 2015 Tony Award for Best Play, the up and coming An Other Theater Company has chosen to produce The Curious Incident of the Dog in the Night-Time, directed by Kacey Spadafora, as the opener for their second season. The play, based on the best-selling novel by Mark Haddon and adapted by Simon Stephens, centers around Christopher (played by Bryce Lloyd Fueston), a 15-year-old boy on the autistic spectrum as he navigates the world around him. Christopher is focused on taking and mastering his upcoming upper level math test, though he gets distracted when he finds his neighbor’s dog murdered in the middle of the night. Christopher decides he must begin investigating to uncover the mystery of who killed the dog, all the while discovering truths about his family and ultimately himself.

Although the theatre space is small and unconventional, I greatly enjoyed the simple, yet detailed set design by Kacey Spadafora. The upstage wall has been painted with green chalk paint, displaying numerous math problems covering the entirety of the wall drawn in chalk. Simple blocks and plastic crates were used by the actors as set pieces and to create dimension on an otherwise bare stage. As there are many different settings throughout the play, I appreciated the minimal staging and simplicity, combined with my imagination to envision the action taking place around the characters. I also thought the scattered bright lights (designed by Paige Porter) on the ceiling were a nice touch during a beautiful moment, providing a glimpse of how Christopher is seeing the stars above him.

I was also charmed by the use of a white board throughout, set up at the back of the stage. An Artist, played by Ash Knowles, draws on the board consistently during the show, most often depicting important aspects of the scene. For example, Knowles drew raindrops as Christopher described the weather. This visual aspect offered different perspectives to the scene, as well as providing another sensory element to the whole production. 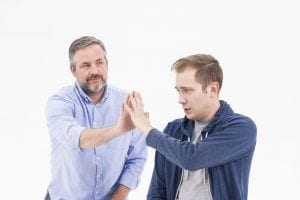 Brett Merritt as Ed and Bryce Lloyd Fueston as Christopher.

Simple choreography, by Chantelle Wells, was also appreciated. I noticed the same circular motions and hand symbolism throughout, adding meaning to the gesture. At times the movements were fast and chaotic, or more abstract, but they remained motivated by the actors. Wells, along with Spadafora, were skilled at using the actors’ blocking, movement, and inflection to emphasize the remarkable script and its use of rhythmic and descriptive language.

The acting in the production was largely superb, with the standouts being the lead actors. Fueston as Christopher was fantastic. His expression of autistic characteristics rang true and sincere. His fidgety and reactive portrayal highlighted the character’s need for honesty, while also providing moments of humor. I enjoyed Fueston’s expressive voice, and the instants where he would speak very quickly or ramble were effective at depicting the character’s intelligence, while also providing a glimpse into how Christopher’s mind works quickly to analyze his thoughts and the situations around him. Being able to see into Christopher’s thought process helped me connect with his character. Christopher’s journey from start to finish is immense and brave, and I was invested in it the entire time. 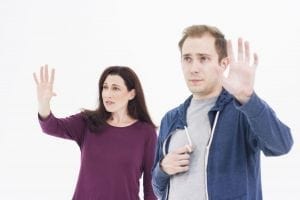 Dianna Graham as Judy and as Bryce Lloyd Fueston as Christopher.

Equally impressive was Brett Merritt as Ed, and Dianna Graham as Judy, playing Christopher’s father and mother, respectively. Both actors were deeply emotive, providing a profound level of emotion and passion to the production. I felt Merritt was particularly effective, and I was intensely moved during a powerful moment between Merritt and Fueston. The two actors had palpable chemistry, and I most enjoyed how they each communicated their emotions in different ways, showing that they each feel pain, but they may feel and process emotional turmoil differently from each other. Another especially tender and moving moment was when Ed helped Christopher change his clothes, showing Ed’s love and care for his son. When this situation occurs later with Christopher and Judy, Graham is just as good at expressing the sweetness involved, and helping this beautiful moment come full circle.

The ensemble was more hit-and-miss, though I appreciated their work as a group as their strength did seem to be as a whole, rather that the individual characters they were playing (most actors played several characters). I became confused at times if an actor was playing a new character or their previous one. Moreover, most actors struggled to keep their varying accents consistent. I did enjoy the ensemble actors depicting subtle characteristics of autism throughout the play, such as bodily tics, tapping their hands or feet, and making seemingly random sounds. At times anxiety inducing, I was struck by how difficult, as well as rewarding, autism can be for those who experience it and for their loved ones. This provided a beneficial opportunity for empathy and understanding.

The Curious Incident of the Dog in the Night-Time is a beautiful play, abundant with poignant themes and metaphors, with one stand out to me being the importance of healing damaged relationships when they are full of love. An Other Theater Company took on a challenge with this play, and I believe they did it justice, providing a touching experience and important messages to our community.

An Other Theater Company’s production of The Curious Incident of the Dog in the Night-Time runs Fridays and Saturdays through September 29, with a sensory-friendly matinee on September 22 on the second floor of Provo Town Centre Mall (next to Dillards). Tickets are $12-17. For more information, visit anothertheater.org.