The Broadway theatre season ends this week, and soon the question on the mind of every fan is: Who will the Tony Awards recognize this year?

Although most audience members don’t think about it, the Tony Awards can be the difference between a show closing immediately or flourishing for months (or years) to come. Producers use Tony nominations and awards heavily in their marketing, and many audience members see the winners of the Tony Awards for Best Play or Best Musical as “must-see” shows each year. Conventional wisdom in the theatre world is that a show that wins a lot of Tonys will have a longer run.

But which Tony Award is most important? There are currently 26 Tony Award categories, and I chose to investigate which nominations and awards were associated with a longer production run because more performances would correspond to a more successful show. The results were published in the latest issue of the scholarly journal Arts and the Market in my new article “‘I Hope I Get It’: Impact of Tony Award Nominations and Wins on Broadway Production Longevity” (Warne, 2018).

To do conduct this study, I downloaded data about nearly every Broadway show since the 1985-1986 season from the Broadway League. I then identified productions that had open-ended runs. Usually this information was only available from 1998 through the present, so I concentrated on those years. I also identified close-ended shows that either (a) closed at least a week early, or (b) closed at least two months later than originally announced. I did this because these types of “close-ended” production runs function more like open-ended runs. 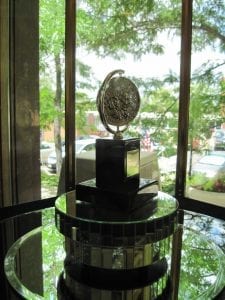 I identified 429 Broadway productions (187 plays and 242 musicals) since 1998 that met my criteria. I then used a procedure called survival analysis (Cox, 1972) to determine whether a particular Tony nomination or win was associated with a longer run after controlling for the year and month a show opened, its status as a play or musical, the cast size (a proxy for running costs), its status as a revival or an original Broadway production, and the percentage of tickets sold in its first full week (as a proxy for marketing success). Previous research had shown that all of these variables were important factors in the length of a Broadway show’s run (e.g., Gates, 2013; Kulmatitskiy, Nygren, Nygren, Simonoff, & Cao, 2015; Maddison, 2004, 2005; Reddy, Swaminathan, & Motley, 1998; Simonoff & Ma, 2003)

The average play had a run 149.5 performances (standard deviation = 161.6, median = 101), and the average musical had 492.1 performances (standard deviation = 762.5, median = 228.5). I found that production that won the Tony Award for Best Musical was 3.1 to 3.6 times more likely to stay open compared to a similar show that did not with the Best Musical Tony Award. The only other award that was statistically associated with a longer run was the Tony Award for Featured Actor in a Musical (2.9 to 3.4 more likely to stay open), while the Tony Award for Featured Actress in a Musical was associated with a run (2.2 to 2.7 times more likely to close).

Other nominations and awards had weaker effects on the longevity of a production run, but these results were either inconsistent or too weak to provide strong evidence for a relationship between the award and a production’s run.

No research study is perfect—including this one. Because I was comparing the individual impact of individual nominations or awards, this study does consider the cumulative impact of multiple Tony Awards. For example, it is possible that winning more than 5 Tony Awards may be more important than winning any individual award. Also, this study cannot show a cause-and-effect relationship between Tony Award success and the length of a show. In other words, I can’t prove that winning the Tony Award for Best Musical causes shows to have a longer run. It is possible that good musical productions would have a long run, regardless of whether they win the Best Musical award. (We can’t go back in time and take away the award and then see how long the show runs.)

What does this mean for readers? If you’re an audience member, then the Tony Awards can give you a clue about when shows might close. Productions that win the Tony Awards for Best Musical or Best Direction of a Play will probably still be around for several months (or even a year or two) after the awards show. But if you’re interested in a production that doesn’t win one of these awards, you might want to plan your trip to New York City so you can see the show before it closes. If you’re a producer or marketer, keep pushing those big “marquee” Tony Awards that send messages about the overall quality of a show (e.g., Best Musical, Best Direction of a Play), instead of awards that showcase a part of a production (e.g., technical awards, acting awards). Also, marketers may want to check out my research study on theatre marketing (Warne & Drake-Brooks, 2016), which has results that apply outside of a Broadway context.

Readers may be interested in some of the theatre trivia I learned as I wrote this article:

I hope readers will feel free to contact me if they have any questions about the study. I am making the data freely available (which would be helpful for anyone who has to teach survival analysis or who wants to practice that method). Plus, I’m updating the dataset periodically, so people in future years won’t have to spend six months preparing the data for analysis (like I did).

Gates, S. (2013). Moneyball on Broadway: A statistical and economic exploration of how to succeed on Broadway without really trying. Proceedings of the National Conference on Undergraduate Research 2013, 1, 870-878.

Note: The data for this analysis is available for free at https://osf.io/npfs9/.