OGDEN — Terrace Plaza Playhouse is the latest company in the area to tackle the 2009 musical 9 to 5, based on the 1980 movie of the same name, with music and lyrics by Dolly Parton, who also starred in the movie. The show is about sexual harassment in the workplace, sexism, and the difficulties woman face when trying to get ahead in the world of work. The relevance of these issues that were apparent decades ago continue to be an integral reason to utilize the arts to convey the struggles society is facing in the #MeToo era.

The main plot centers around three women, Violet Newstead (played by Terresa Shreve), Doralee Rhodes (played by Lori Reese), and Judy Bernly (played by Jessica Andrus), as they deal with their cruel and difficult boss, who feels free to be openly sexist, Franklin Hart Jr. (played by Andrew Oliverson).

Director Leslie Richards has done a fantastic job utilizing the space for this production, and balancing the main characters with the ensemble cast. I have seen previous productions at Terrace where the chorus tends to overwhelm the stage, but this ensemble size was the right fit for the production. I was also impressed with the set design by Megan Dunmeyer, which was not showy, but had excellent elements of color and theme, and as the office grew to include more enjoyment in the work day, elements of the set also changed to reflect that. 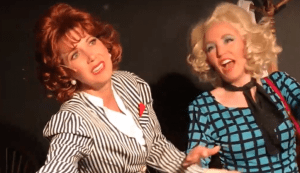 Choreography by Ginny Spencer was also a highlight, especially the opening and ending sequences with the popular song “9 to 5,” and the humorous back up singers and dancers in songs such as “Backwoods Barbie” and “Heart to Hart.” I was surprised to find how much I enjoyed the background characters, because it is not an element I have previously noticed in this show.

Costuming is credited to a full team in the program, and it is reflective of the 1979 time period. Of special note is also the wigs provided by wig specialist Jamila Lowe, which reminded me of how happy I am that the styles of the late ’70s and early ’80s haven’t made a comeback.

Shreve portrays Violet, the hard working single mom who knows more about the company than the male bosses that consistently receive promotions. Shreve’s voice is phenomenal, but even more important in this role is her impeccable timing, which was evident in the number “Around Here,” where she lays down the law of what is expected in order to be successful in the workplace. As the show progresses, Shreve becomes even more strong in her character, and the second act number “One of the Boys” showcased the power that Shreve has as a vocalist as well as an actor.

Reese was credited as a replacement for the evening for the role of Doralee, made iconic in the movie by Dolly Parton. Reese did well stepping in, and seemed to handle the role with ease. While Parton’s music does not match my personal tastes, Reese did a fine job delivering the characterization needed for Doralee. What I enjoyed even more was the connection Reese shared with Shreve and Andrus as Judy, the shy, recently divorced woman trying to learn how to stand up and be self sufficient. The three are to work well as a team in Patricia Resnick‘s script, and these three actresses excel at that task. The final number in the first act, “Shine Like the Sun,” gave all three lead actresses a moment to shine.

The highlight of the evening was the traditional 11 o’clock number, “Get Out and Stay Out,” where Judy finally gets the courage to stand up to her abusive ex and stand strong on her own two feet with the realization of her own strength. I saw many people touched by Andrus’s performance, and confess that I too was touched by the sentiment that she was able to convey with her talented voice and empathy to the role.

Andrew Oliverson had the difficult task of playing the boss Mr. Hart, a man that the audience is bound to hate. Oliverson played the role with talent and ease, giving the audience the opportunity to enjoy his vocals while still despising all he stands for.

Ultimately, it is a fun show with music that kept my foot tapping and my mind humming, while at the same time reminding the audience of important topics not only of equality, but of work/life balance, judgment of others, and the importance of remembering that everyone—from the CEO to the little guy—has a right to be heard, seen, and respected.

9 to 5 plays Fridays, Saturdays, and Mondays at 7:30 PM through May 26 at Beverly’s Terrace Plaza Playhouse (99 East 4700 South, Washington Terrace). Tickets are $10–17. For more information visit www.terraceplayhouse.com.