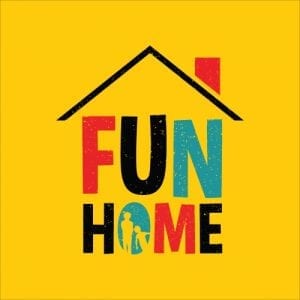 SALT LAKE CITY — Winning five Tony awards in 2015, including best musical, Fun Home became Broadway’s first ever musical to feature a prominent lesbian lead. With music by Jeanine Tesori, and the book and lyrics by Lisa Kron, Fun Home is based on Alison Bechdel’s 2006 graphic memoir Fun Home: A Family Tragicomic. The musical has had Utah roots since its conception, as it was developed at Sundance Theatre Labs in 2012 and 2013. Director Jason Bowcutt has been anxiously awaiting his opportunity to bring Fun Home back to Utah to premiere it at the Salt Lake Acting Company. Bowcutt’s precise direction, along with the love and care he has infused into this work, make this production a surefire success.

Fun Home chronicles the life of the Bechdel family, a picturesque quintet from an outside look, with a more dysfunctional feel behind closed doors. The father, Bruce Bechdel (played by Benjamin Henderson), is stern, serious, and particular. He has put great care into restoring his old Victorian style house, and filling it with various antiques and beautiful décor. A local English teacher by day, Bruce also runs the Bechdel Funeral Home, which the family lovingly refers to as the “fun home.” Bruce’s love for his home and similar projects seem to overshadow everything else in his life, including his family. The house acts as a front for an easier and more polished life, one that is not bogged down by secrets and lies. The incredibly detailed set, designed by Dennis Hassan, emphasized these themes and gave the audience a peek into Bruce’s personality through the ornate house.

This show has a solid and fantastic script that gives the actors nuanced and multi-dimensional characters to work with. The story largely follows Bruce and his relationship with his growing daughter, Alison. The story is told through a series of non-linear vignettes where Alison looks back on pivotal moments in her life with her father and discovering her own non-traditional sexuality. Alison discovers in her college-years that her father has been a closeted homosexual his whole life, having extra-marital affairs, including with under-age boys. When Bruce commits suicide three months after Alison comes out to her parents as a lesbian, Alison’s new found discovery and shared connection with her father makes his death even harder to process. Fun Home is much more than a typical tale of teenage angst, a coming-out story, or even that of a dysfunctional family. At its heart, it is a beautifully tragic tale about complex relationships, and what is lost when listening and understanding cannot be fostered.

The acting in Fun Home is superb all around. The child actors I saw, Matthew Rees as Christian, Oliver Kokai-Means as John, and Ava Hoekstra as Small Alison, all shine in their roles. With what could be a deeply sad show, it is the children that largely infuse life and energy into the production. They are all a joy to watch, and bring a needed element of fun and comedy to the production. With skilled musical direction by David Evanoff, I particularly enjoyed the children during their “Come to the Fun Home” musical number, where they practice a potential commercial for the family business.

The three actors that play Alison at different stages of her life are all equally compelling, and I can see the three melding into one cohesive character. As Small Alison, Hoekstra gives us a glimpse of what it was like growing up with her strict and estranged father. Hoekstra excelled in her focal musical number, “Ring of Keys,” where she first discovers a foreign, yet familiar kinship with another lesbian adult. We see Alison’s personality develop further as we are introduced to Medium Alison, a young college student, played by Hailee Olenberger. Olenberger articulates the common angst of young adulthood as she goes away to college. It is heartening to see Olenberger express her character’s feelings so well. As I watched her, I kept thinking of how growing up is already complicated enough without being uniquely different, as she feels she is. Olenberger shows us how Alison is learning to navigate the world as a lesbian, and how to cope with the loneliness she feels. Olenberger’s best moments were during her musical number “Changing my Major,” as she reflects on her past night of sexual awakening and intimacy with another female student. Seeing the character’s glee and anxiety all wrapped up together was charming and delightful.

Shawnee Kennington as Adult Alison is just how you would imagine the younger Alison characters to become. She is enlightening as she takes the audience through the past, showing us her memories and re-living them. She acts as an omniscient narrator through most of the show, although when she finally steps into her memory, engaging in the action with her father, the moment is poignant and powerful. She sings “Telephone Wire,” as her and Bruce attempt to have a conversation where they both acknowledge each other and their commonality. Kennington and Henderson make this interaction deeply profound. Watching Hoekstra, Olenberger, and Kennington portray Alison’s journey throughout is wonderful, and I loved being able to see some of Alison’s most vital discoveries at different times in her life.

Lastly though, I will mention Henderson as Bruce Bechdel. Henderson is excellent as he expresses deep frustration and anger with his life, showing what it has been like to live a lie as a closeted gay man. As Bruce demands perfection from his family, often being too harsh and offensive, it is clear he will never be fulfilled by this life. Although the character is brash, Henderson has moments where he infuses vulnerability and intense sadness into the role, making him a sort of sympathetic character as well. Henderson’s most thoughtful and complex moment is during his number, “Edges of the World.” I was deeply moved by his performance here, as well as the minutes that followed leading to the end of the show.

Fun Home is likely to be one of the most talked about productions in Utah this year. There is so much goodness in this production that I cannot mention it all in one review. A perfectly polished musical where every element seems to fit together flawlessly, Fun Home at SLAC is deserving of high praise. Fun Home is particularly special because it is suitable and relevant for just about everyone, and provides enough entertainment, heart, and thought-provoking elements guaranteed to satisfy almost anybody.