SALT LAKE CITY — This small California home is a mess. There is laundry littering the floor, rubbish piled up so high by the front door that it is impassable, and whoever approaches the sink is going to have to don a hazmat suit. Not a great place to come home to for young soldier Isaac Conner, played by Austin Archer. He shouts at the front door while his wacky mom tries to explain through zany, mad-cap metaphor that he needs to use the back door.

Christy Summerhays is Paige Conner, a veritable lava lamp come to life. Her husband Arnold lolls about on the floor, a slobbering lump of simmering confusion and clownish tragedy, as he is a stroke victim who does not receive the care he needs. Isaac comes home to chaos, abuse, new-wave pop psychology, and undoubtedly a symphony of smells. “Isn’t this play ENDEARING?” It leers at you, shaking you by the collar.

Summerhays led the play, but I found Paige Conner immediately exhausting and utterly imaginary. This was not a real person. This was a sitcom representation of a hippie mom complete with neon flowers and a newfound queer identity inspired by the years since her eldest son left for war. As her trans child puts it, “She’s re-appropriating my identity.” Paige is emasculating her husband with estrogen tablets, makeup, and a nightgown and clown wigs, but more than that, she allows him to soil himself without cleaning him or the floor. He does not, in her mind, deserve real care. What the audience sees is a disabled man pathetically rolling around in the stew, and what she sees is a monster. But Paige herself is monstrous. She neglects her husband, co-opts her trans-masculine son’s experience like some kind of drug, and triggers her eldest son’s puking mechanism with the blender, which I’m guessing is some kind of symbol. I say guessing because Isaac also pukes when he hears about his sister’s new identity. (Puking at the mere mention of trans people is funny! It’s in all the movies!) 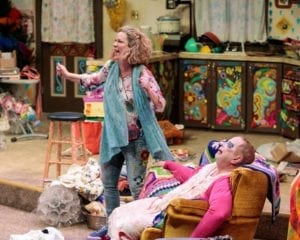 I perhaps went in with expectations. I wanted a trans-positive play that would inform and delight members of the Salt Lake Valley who perhaps need a greater understanding and compassion for our trans brothers and sisters. What Hir, written by transgender playwright Taylor Mac, delivers is the transgender individual many people are afraid of: a deeply unpleasant, jocular little tyrant who is going to scream at you if you accidentally use the wrong pronoun. This play is not here to inform, but to . . . something. Exist? Not entertain, I don’t think. It’s far too ghoulish to be funny and too hyper-eccentric to be dramatic. It exists neither in the surreal or the real world, and not a one of the characters is someone I’d want to invite to high tea or tennis. Maybe laser tag?

I applaud Salt Lake Acting Company for insisting on a transgender actor in the role of Max. Liggera Edmonds-Allen is a gender-queer individual who is perhaps a little green as a performer, but shows signs of becoming an interesting actor. Edmons-Allen performed physicality in a specific way: here is where I tremble to show emotion. Here is where my teeth are bared and my fists are clenched to show masculinity. Here is where I throw my arms open wide to drive my point home. If the play itself is not a natural or comedic representation of human life, then Edmons-Allen’s interpretation of Max fit right in. 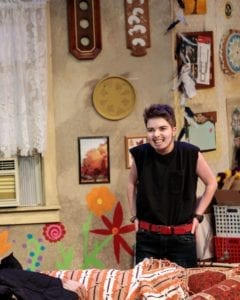 The one vaguely sympathetic character is Isaac, the vomiting ex-military man who was dishonorably discharged for abusing meth while in the service. Isaac starts out like any cisgender, heterosexual white man coming to terms with the notion of LGBTQIA+ identity, but Archer’s performance was layered and textured, infusing humanity into this droll little play with determined, dogged tenderness and skill. In a scene where he cleaned up the foul little home, I cheered for his triumph with the rest of the audience. I was won over by Isaac’s insistence that there is humanity in everyone in a script that insists all humans are monsters and all have been monstrous.

The one element of this production that I was absolutely thrilled about was the set decoration by Cara Pomeroy. It is a unique challenge to design a harum-scarum explosion of color, disorder, and nonsense. There was a rainbow of wreckage on that stage, and it was heroic. Beautiful, even.

It’s maybe an interesting play, this play. Maybe. As a reviewer, it is my distinct task to say what I think of plays and productions, but all I can give this one is a resounding, “I don’t know. You’ll have to decide for yourself.”