OREM — Romeo and Juliet are Shakespeare‘s famous “star-crossed lovers” whose whirlwind romance ends in tragedy. Their story is on stage again in Utah, thanks to the Grassroots Shakespeare Company and the SCERA. Unfortunately, just like the title characters’ romance, this production’s run is far too brief. I hope readers in Utah County will see this version of Romeo and Juliet before it closes on Saturday. 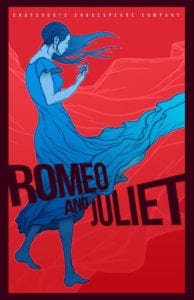 Longtime UTBA readers know that Grassroots blends Renaissance-era and modern theatrical practices. The biggest difference between a Grassroots Shakespeare production and most modern productions is the lack of a director. Thankfully, Romeo and Juliet had an experienced cast that could still create a unified artistic viewpoint for the play. The cast chose to emphasize the comedy of the first two acts, and the audience responded in typical Grassroots fashion, with applause, laughs, heckling, etc. But the mood changed drastically when the characters started dying, and the cast handled this shift exceptionally well. It nice to see that a play that is labeled as a “tragedy” doesn’t have to be a depressing drag in every scene.

The only drawback with the “directing” of the production was that there was little to indicate that there was mortal danger between the Capulets and Montagues. Because the opening argument between Tybalt and Romeo’s friends was rushed (as was Tybalt’s anger towards Montagues crashing the Capulets’ party), Verona did not see like a dangerous place. Therefore, when characters started dying, the effect was jarring. 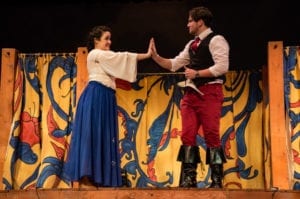 The acting style in this production was very presentational, with no fourth wall and actors often delivering lines directly to the audience. The style was conducive towards creating performance style that was easy to understand. Indeed, most lines were easy to comprehend because of the modern cadence of the actors’. Although this did make the poetry of Shakespeare’s script harder to discern, that was a small price to pay for an accessible production of a Shakespeare play.

Lucas Adrian Buchanan played Romeo sincerely, which made the character vulnerable and human. Buchanan’s greatest scenes consisted of reactions to the tragic events of the story. For example, the way Romeo was overcome with despair as he cried after killing Tybalt was touching. Buchanan was also a nice match with Merry Magee in the role of Juliet. Their marriage scene was sweet and romantic, and their final scene when each was despairing over the other’s death was a satisfying conclusion to the play. My only regret about their pairing is that the characters’ initial meeting felt rushed, and they failed to show sufficient emotion in the famous balcony scene. Indeed, while watching the balcony scene, I wanted to shout, “Get closer to each other! Look into each other’s eyes! Kiss! Show me you love each other!” Still, Magee was a superb actress, and her Katerina-like interpretation of Juliet in her initial scene and the the responses she gave to the nurse’s calls in the balcony scene made Juliet’s rebellion seem completely logical. 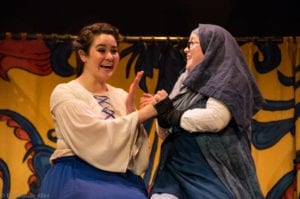 Merry Magee as Juliet and Jessamyn Victoria Svensson as the Nurse. Photo by  Ellen Nicole Allen.

Another strength of the cast was Daniel Whiting in the role of Capulet. His enraged tirade when he demanded that Juliet marry Paris (played by Jarrith Parker McCoy) was the best scene of the play, mostly because of Whiting’s intensity and Magee’s tearful reactions. Opposite Whiting was Jessica Jean Myer as Lady Capulet, whose dignified bearing and powerful voice showed why she could rule one of the most powerful families in Verona (and how she could verbally keep Tybalt in his place at the party). Additionally, Brandon Bills in the role of Benvolio emitted charisma in every scene, and he seemed a natural fit for the role.

The only problem Bills had to deal with was the fact that Benvolio and Mercutio (played by Nick Grossaint) seemed to have interchangeable personalities, an issue that I blame on the lean cutting of the script. Grossaint and Bills weren’t the only actors whose characters lost a lot in the cutting; Jessamyn Victoria Svensson’s nurse was less flighty and funny, for example, because she lost so many of her lines. Nonetheless, the cutting of the script is very good at keeping the most essential components of the story, and the 80-minute performance time (without an intermission) breezes by. 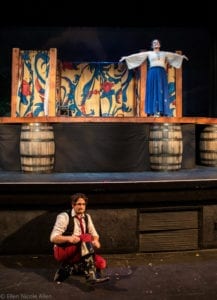 Grassroots is getting better at creating visually interesting shows. In keeping with their efforts to incorporate Shakespearean practices into their productions, the visual emphasis is placed on the costumes. This Grassroots cast has carefully considered how best to blend modern and Renaissance dress, with the result being the illusion that all the characters live in a world where past and present collide. Whiting’s pairing of modern pants and tennis shoes with a long, foppish overcoat was surprisingly cohesive, as were some of the men’s high boots worn with modern shirts.

Although enjoyable, there are some minor distractions in this production. AJ Taysom was unconvincing and flat as the prince; I found it hard to believe that he had the bearing to keep unruly Verona from descending into chaos. Some directorial choices were inconsistently applied, such as the use of the audience aisles as entrances and exits. And after seeing many Grassroots productions in a variety of found spaces, there is something strange about seeing this troupe perform in an actual theater (though my pregnant wife enjoyed the comfortable seating).

But the drawbacks I have mentioned in this review are trivial. None of them should prevent a reasonable audience member from enjoying this production. This well-trained, thoughtful cast has created an emotional Romeo and Juliet that SCERA should be proud to have on their stage.

The Grassroots Shakespeare Company production of Romeo and Juliet plays nightly through January 20 at 7:30 PM at the SCERA Center for the Arts (745 South State Street, Orem). Tickets are $10-12. For more information, visit www.scera.org.