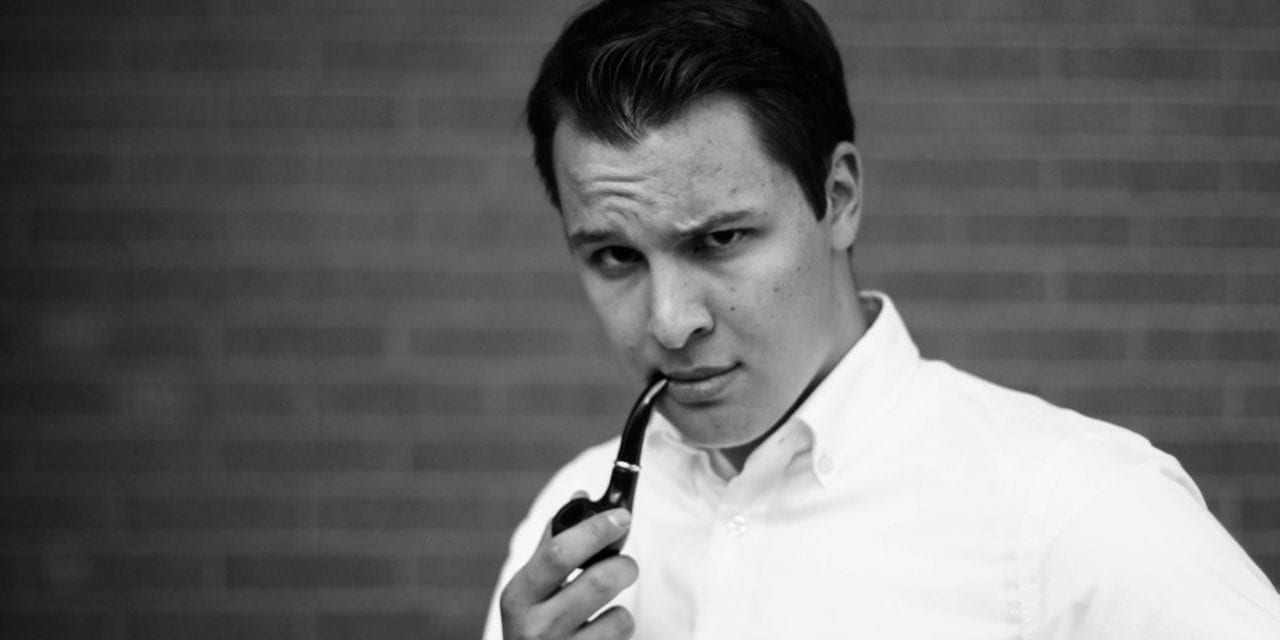 PROVO — Some people, when they hear the title War of the Worlds may think of one of a variety of media adaptations of H. G. Wells’s famous science-fiction novel, never out of print since first serialized in 1897.  Some may recall actor Orson Welles’s infamous October1 938 radio broadcast based on that book.  While his name is not Wells, playwright David Hanson’s theatrical adaptation of  War of the Worlds has the potential to make its own lasting reputation.

Hanson’s play is not a mere retelling of a Martian invasion or re-enactment of a broadcast.  Rather it is the dramatization of the real life events surrounding Orson Welles’s struggle to express himself and gain radio following, his manager’s and supporters’ struggle to keep Welles from imploding, and America’s struggle to deal with the terror and outrage his radio drama invoked. At the height of the Great Depression and at only age 23, Welles was already a successful actor, director, writer and producer.  He was also well known as both a true artistic genius and an enfant terrible, bullying his way through anything or anyone who opposed his will.  Without this singleness of vision unforgettable works such as “War of the Worlds” and “Citizen Kane” would never have been created.  But what was the emotional cost of  achievement to himself, his team, and even the nation? What it is is gripping about this show is that it makes the theater audience participants in portrayed events and puts the “in” in “intimate theatre.”

Of course Hanson’s vision could not itself be achieved without the assistance of talented, creative collaborators.  He is well served by the production crew and cast and even the size of the Covey’s tiny black box theater. Director Ben Hopkins has chosen to make the most of very little in production design. The play is set primarily in a radio studio where the Mercury Theater company broadcast its weekly program of dramatic stories.  This space is only indicated by a row of three microphones, an “On Air” sign, and a stage intern who waves signs such as “talk” and “gasp” to engage the audience.  On the wall behind are three black and white picture-window sized posters respectively representing a living room, the steps of an official looking building, and a messy office.  There are red curtains framing each picture which are used to swiftly cover or reveal each location, efficiently moving the action from place to place.  The entire furnishings of the set consists of a few “theater cubes,” boxes that can be moved and piled as needed. For example, actors ride in a “car” created from a crate to sit on and a small steering wheel to hold.  As with a radio show itself, the audience must fill in the details.

Also as with radio, the illusion is strengthened by sound effects created by the cast using basic objects such as a hammer and a metal sheet. These effects are used as part of the radio “show,” and as part of the surrounding action, again immersing the audience in the unfolding events.   The focus is on the acting, not the design elements. The costumes tend toward muted colors, with specific exceptions such as the bright red pipe Welles constantly clutches between his grinding teeth.  In another life he might be a fire-breathing dragon. This minimalist approach puts the burden of carrying a complex story squarely on the actors. 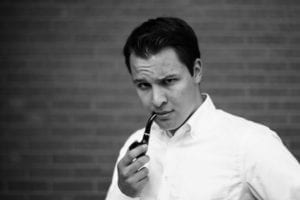 Even the cast is small, consisting of three men playing the three central characters and three women playing a miscellany of unnamed supporting roles. Curtis Cluff portrays John Houseman, a self-styled Brit who must manage Welles and mediate between the artist and the studio producers.  The actor skillfully under plays the tension his character feels, forced to find a precarious balance between protecting Welles’s creative space and dealing with the realities of business. Brandon Henderson, making his own theatrical debut as much put-upon writer Howard Kooch, could easily be mistaken for a seasoned performer. Local directors might do well to keep an eye on him. Derek Johnson has the difficult task of portraying Welles, the petulant, dynamic force of both the play and the radio show.  The character is hard to like, as he is seen only in moments of butting heads with those who have his best interest at heart, or pushing his crew around.  Welles spends so much time angry that it is a relief to see him grin in understanding with his partners over a joke. However, there was an odd moment in which Welles is humbled where the actor seemed to mentally disengage with his role and tune out a lecture rather than portray vulnerability.  Whether that was an acting choice or a loss of focus was difficult for me to tell, as the actor’s back was turned towards the audience.  Otherwise Johnson was certainly up to the challenge of portraying such a difficult person.

Speaking of challenges, Hannah Witkin, Mariah Bowles, and Alice Johnson—playing Actor 1, 2, and 3, respectively—had to portray a dizzying array of characters with hardly a breath to change from one to the next. Each had to assume the roles of both women and men of differing ages, backgrounds, and even accents with only a bit of costume change to assist in differentiating a manly radio performer from a farmer’s wife and a switch from humor to pathos, from scene to soliloquy and back again. They expended phenomenal quantities of energy and concentration, yet somehow made the results seem effortless; one simply accepted each well-delineated personality.

Of course each characterization also arose from this playwright’s ability to evoke a different character in only a few words.  Hanson’s work seamlessly flowed from place to place as well as back and forth in time.  The play was so engrossing that the audience had to be cued that it was time for intermission.  How could the hour have passed so quickly? If there is any weakness to this production, it is in the ending, where the text seemed repetitive. A couple of the actors began unconsciously to make the small hand shrugs and vocal pauses that indicate a story has lost its current and run the performers aground, unsure of what direction to take.  It was difficult to assess just what point the playwright wanted to ultimately emphasize.  Perhaps after this staging a slight refocus rewrite might be helpful. Yet, this issue should not discourage a potential audience memorable from attending what is over-all a professional level, memorable production.

There is a hot academic debate going on over how many people were actually duped and scared witless by the “fake news” of alien invasion performed by Welles’s company.  It is accepted that the controversy over the affair led to discussion that still impacts the entertainment industry today. Even as I sat and watched how the actors created their illusion through word and sound, I still found some part of me drawn into the predicament of the frightened listeners. What modern person knows how they would have responded in the 1930’s? What responsibility do the creators of media content bear for the response to what they present daily for our consumption? In a week when death actually, inexplicably, fell down from the skies onto a country music festival, this text seemed eerily topical.  The country has been collectively depressed and horrified by events played out in real life, carried into our homes by current media.  Can people engage in productive dialogue in the aftermath?  Perhaps in the future there will be other playwrights helping us to find sense in the face of senselessness.

The War of the Worlds plays Thursdays, Fridays, Saturdays, and Mondays at 7:30 PM in the Brinton Black Box in the Covey Center for the Arts (425 West Center Street, Provo) through October 28. Tickets are $14-16. For more information, visit www.provo.org/community/covey-center-for-the-arts. 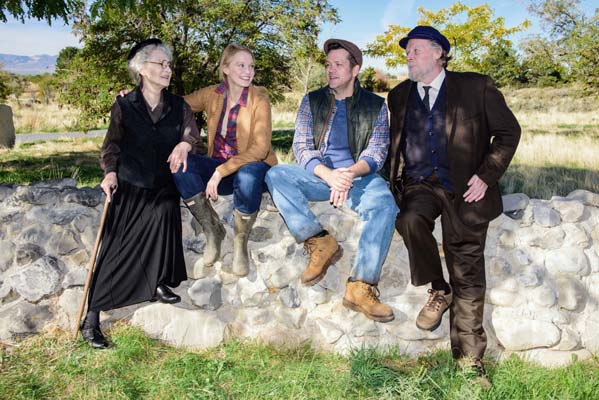 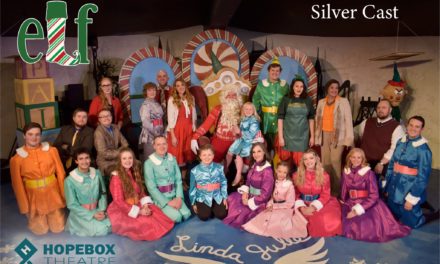 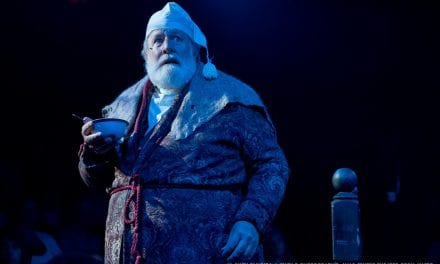