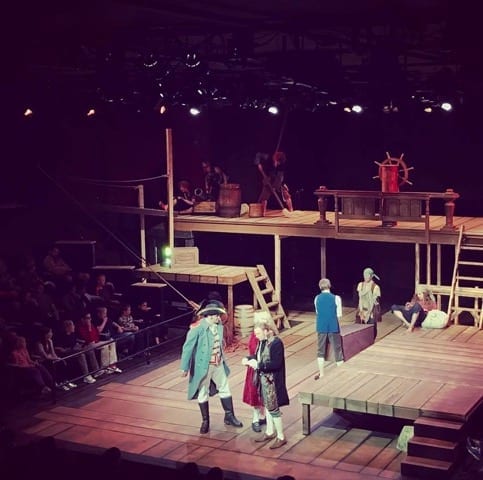 SOUTH SALT LAKE — The Utah Children’s Theatre is a great place to bring budding theatre aficionados to experience the excitement and thrill of the stage. I know this because I brought both of my daughters and my nephew along for the experience of watching their current production of Treasure Island. I decided that the best way to determine the production was of good quality would be to observe the reactions of their key audience, and also to maintain my status as cool mom and aunt.

Treasure Island is a play based upon the novel of the same name by Robert Louis Stevenson. The action is narrated by young Jim Hawkins, played by Maddox Thompson. Hawkins tells his story of how he got mixed up with a group of pirates, British explorers, and how he was able to seek out fortune, adventure, and terror on a ship and at Treasure Island. This production was directed by Taylor Smith, who seems to have been able to strike a good balance between the elements of fear along with the elements of humor and action in the story.

The first thing that stood out in this production was the set, which my six-year-old daughter gasped as she walked into the theatre and said, “Wow! A real live ship!” I imagine that is the kind of reaction that set and lighting designer James B. Parker hoped for when he conceived this design. Additionally, the lighting he designed added to the ambiance by drawing distinctions from the main action on the ship, and the island and pub locations that are also utilized in the story. The costuming, by Meighan Smith, also brought a great deal of style and interest into the show. One of the more interesting costuming elements were the subtle differences between the costumes of pirates, villagers, and noblemen that helped the audience understand the key players and their roles within the story. There was a fog machine in use that added some nice visuals, though the smoke was so heavy that it did seem to bother some of the audience. The one complaint I could have with this production is that perhaps too much attention was paid to props and effects on stage, which sometimes took away from the main focus of the action going on. Perhaps the most entertaining part of the production at large were the fights and action sequences. A pirate story is bound to have some sword fighting and battles, and fight choreographer Spencer J. Hohl did a fantastic job of working with the cast to make these scenes believable and magical. My little companions and I were sitting right on the front row, and a couple of times I saw their eyes widen as it appeared that the people in front of us really had been hit. I confess that even I looked for a while at a few actors laying on the stage trying to determine if they really had been hit.

Thompson was the youngest member of the cast, but his acting skills were apparent, and he was an integral part of the cast. I njoyed his interactions with Long John Silver, played by Bryson Dumas, and with the kind Dr. Livesy, played by Christopher Taylor. There were also a few very tender moments between Thompson and Mrs. Hawkins (Jim’s mother), played by Nova Calverley-Chase. The supporting actors all seemed to fit well into their parts. The show opens with Mr. Billy Bones, played by Robert Fernandez, introducing Jim the world of pirates, treasure, and the action that will follow. Fernandez has a strong command of the stage and was able to convincingly portray a man who is used to being in control and yet at the same time very fearful of those who are wanting to catch up with him. Hohl, in addition to his choreographic work, has a small role where he plays a blind man who is also quite the adept fighter. Seeing him fight eloquently while also blindfolded was impressive. Another favorite of mine was Ben Gunn, a man left marooned for years on an island, hilariously played by John Yerke. I have seen roles like this played too campy, but Yerke was able to incorporate the humor in a way that is interesting and entertaining without being overly dramatic.

Finally, adults should be aware that Treasure Island did tend to get a bit scary at times. The two ten-year-olds I had with me did not seem to be affected at all, but my six-year-old did reach for my hand a couple of times and at one point climbed into my lap. Still, this play was a fun evening at the theatre and Treasure Island captured the attention of the audience well. The company waited in the lobby after the show and talked to the children in attendance, making faces, offering pictures, and asking if anyone wanted to join as a pirate. What a splendid way to end the evening. 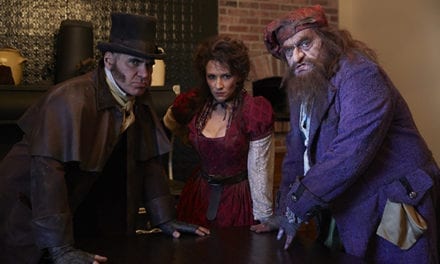