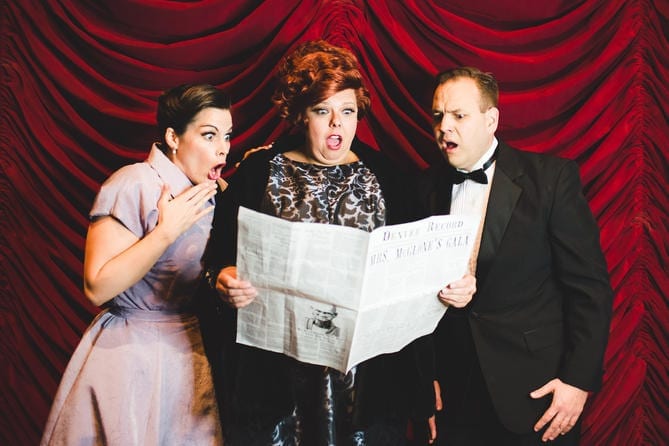 CENTERVILLE — Curtains is a fun show about a musical within a musical. The audience finds itself in the theatre watching the closing scene of the fictional play Robbin’ Hood in Boston, only to have the leading lady murdered before their eyes. The rest of the production ensues in hilarity while, along with the cast, Detective Frank Cioffi sets out to solve the intriguing murder of the “late, if not great” Jessica Cranshaw.

CenterPoint Legacy Theatre in Centerville put together a production of this show that was, unfortunately, fairly underwhelming. The show itself has several large production numbers, a ballad or two, and a plot line that can keep an audience on the edge of its seat if played right. But for me, the show, starring Lori Rees as Jessica Cranshaw and Shelby Ferrin as Aaron Fox, just didn’t land right.

Having attended several productions at CenterPoint, I have to admit I was taken a bit off guard by the quality of the production elements. As always, CenterPoint had a wonderful set design by Scott VanDyke and entertaining choreography by Jessica Merrill. The set was an interesting take on the different parts of a theatre: backstage, onstage and so on. Throughout the show I saw several different scene changes, and each set worked well and was fun to explore visually. The choreography was a highlight of the night, showing off the talented dancers in the crew, and pulling together very stimulating formations.

The music end of this musical was mostly sound. The cast had some very challenging counterpoint melodies to handle, especially during the large numbers of “He Did it” and “In the Same Boat- Complete” (lyrics by Fred Ebb and music by John Kander). The cast was able to sing those melodies and harmonies with precision. However, there were several of the smaller pieces that suffered. A moment like Ferrin playing the piano for the beginning of “I Miss the Music” was engaging and set disbelief to the side temporarily, but was undercut by several off-key phrases throughout the song. The same was true of “A Tough Act to Follow” which was, by far, the most fun dance number of the show, but suffered from a lack of attention to the music. Throughout the show, there were scattered moments of audience engagement, in the sense that an actor on stage would turn from their fellow actors and deliver lines or lyrics to the audience. This particular technique was one that didn’t seem to fit the situation, especially as it would often happen in the middle of a dedicated conversation. This consistent change to the feeling of the show was something that may have been attributed to a directorial choice by Jim Christian, or may have been an idiosyncrasy shared by several cast members. Whatever the cause, it was inconsistent with the rest of the presentation of the script and was disturbing to the flow of the show.

The portrayal of Bobby Pepper by Michael Hernandez was a positive aspect among the other negatives. Hernandez seemed to have all of his lines and choreography memorized (which is more than can be said for one-third of the rest of the cast), and he created a character that was fun to watch and convincing in its entirety. There were several impressive moments of both acting and dancing, especially during the square dance number “Kansasland,” which featured a large duet between Bobby and Bambi Bernet, played by Morgan Western.

Another highlight of the evening was the well-played comic timing used by most of the cast members when delivering a joke. This is sometimes challenging to know when to pause for a joke, how long to let a laugh continue, and simply to know what is going to be funny and what is not. This cast was able to deliver some of the best jokes of the evening with fantastic comic timing.

Unfortunately, amidst the other negative aspects of the production, the good comic timing and solidity of a few performances was not able to salvage the quality of the show. CenterPoint has always had a reputation for good quality theatre, but this show did not measure up to the regular standard they hold. If you are looking for a fun distraction for the evening, to get a few chuckles and to see some fun choreography, then this is the show for you. But if you are looking for the usual standard of a CPT show, I suggest waiting until the run of Curtains has dropped its curtain. 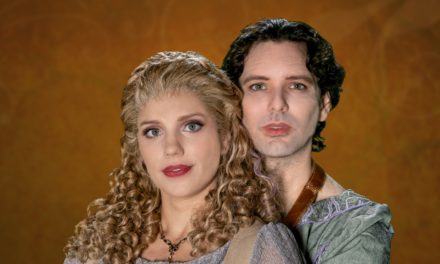 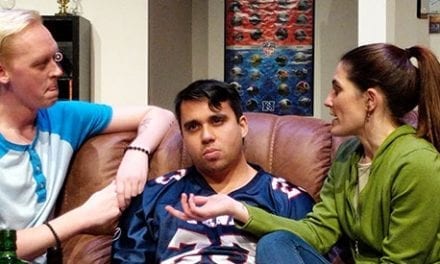 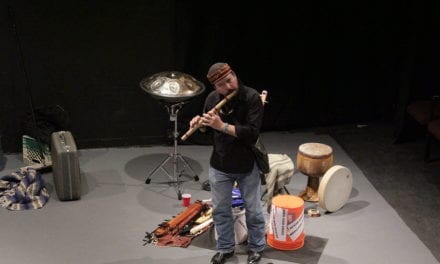