CARRIE: THE MUSICAL is bloody good SALT LAKE CITY — Fresh off of Broadway and as the first Utah premiere, Carrie: The Musical is a tragic and cautionary tale. With a cast of 18, a live band, and in a “found” theatre space in the Gateway Mall, Carrie is yet again another solid production from the Utah Repertory Theatre Company.

Directed by Johnny Hebda, with the book by Lawrence D. Cohen, lyrics by Dean Pitchford, and music by Michael Gore, Carrie: The Musical is the story of a young girl who is the victim of religious close-mindedness and high school bullying. Carrie is based on the 1974 Stephen King novel about a high school teenager who is constantly bullied at school and at home by her mother. As a direct result of her keeping these emotions inside, Carrie discovers she has the unique ability of telekinesis (the supposed power to move objects with your mind), and all the pressures come together in an explosive climax at the end of the story.

Natalia Noble played the infamous role of Carrie, and she did so extremely well. Never once did I believe I was seeing Noble play Carrie, but rather, I saw Carrie. If there was anyone who looked, felt, behaved, and acted her part with 100% honesty, it was Noble. Often, I was entranced by her ability to stay focused, yet energetic. Although her character had many opportunities to disappear into the shadows during the production, she shone in the darkness. Throughout the evening, Noble would give Carrie moments of concentrated nuance: a tilt of the head, a vacant expression, or a sly smile gave the viewers just enough information of what was truly going on in her head to keep us engaged and connected. A strong example of her ability to show, rather than tell, was when Noble imbued Carrie with soft vulnerability while her love interest recited a poem in their English class. She was engaged, and so were we. While some people would jump to say that the mother’s character is the villain in this story, I would go as far to say that everyone who affected Carrie in a negative manner was the villain. In a powerful way, this musical demonstrates the horrible effects of bullying in school, and bullying in religion. Skye Dahlstrom played Chris Hargensen, who took her chance to get back at Carrie too far. Dahlstrom attacked her role with tenacity and force. It was easy to dislike her character, as Dahlstrom gave us moment after moment to wish for her demise. She became almost mad with revenge as she sought to make Carrie’s life a living hell. It pained me to see how Dahlstrom’s character treated Carrie, especially in the opening scene. Without going into too much detail, Dahlstrom tore Carrie apart after an embarrassing moment in the school shower, and from that moment on, Dahlstrom never looked back and sought for that revenge.

Other memorable performances worth noting were from Rachel Shull and Emilie Starr who played Margaret White (Carrie’s mother) and Sue Snell, respectively. Shull had great control over her vocals and character. She played Carrie’s mother as a mixed sugary-sweetness with a large helping of salt. It was painfully bittersweet to see Shull’s character go from tender mother to outraged lunatic in “And Eve Was Weak”. Starr gave a wonderful cohesiveness to the story, jumping from the present to flashbacks to enlighten the audience of what went on. Starr had an excellent voice which she manipulated from joy to sadness, most notably in “Once You See” and “You Shine.” If anything held the show together, it was Starr’s ability to keep it on track as she quickly and easily moved from the past and the present throughout the evening. Lastly, Brock Dalgleish played Tommy Ross with just the right amount of boyish energy and charm. He gave his character a great amount of depth in the song “Dreamer in Disguise”, as he—along with the audience—realized that his character wasn’t just about looks or popularity, but that he also had a soul. Although I wish I could mention each member of the ensemble, the entire cast was equally matched vocally. Their harmonies were effortless and strong. As a whole, the choreography was executed well and in-sync. The cast knew the type of story they were telling, and they did so with gusto. The cast was a tight-knit group and it showed through their use of improvisation during scene changes and ad-libs.

There were a few odd choices throughout the production that made me question their effectiveness. One was the lack of props, which Hebda mentioned was a particular directorial choice. It didn’t bother me until I saw some cast members “miming” using a cell phone to take selfies, and then a cast member brings a physical cell phone on stage during prom. Or when Carrie mimed studying telekinesis out of a book that wasn’t there, only to levitate a real pen. There was simply no consistency, and it took me in and out of the production throughout the evening.

The lighting design was simple and helped moved the story along. There were flashes and strobes to denote Carrie’s telekinesis, and simple spotlights and blue hues to demonstrate calmer moments. The sound design was also effective and balanced the cast and the live band well. There were only a few moments when the band was too loud, but it happened so little it was easily forgiven.

Though Carrie: The Musical had a short run on Broadway, you now have some time to see it for yourself. If you are unfamiliar with the film or musical, please be advised that the production deals with mature adult themes, violence, and swearing. If rated by the MPAA, it would undoubtedly be rated “R”.

Filled with a sweeping score, and surprisingly deep characters, you’re in for a post-Halloween treat. Combine that with talented cast and lots of stage blood, you’ll be happy you experienced Carrie and it’ll be a night you never forget.

The Utah Repertory Theater Company’s production of Carrie:The Musical plays at The Gateway Mall (90 S Rio Grande Street, Salt Lake City) October 30-November 8, 2015, at 7:30pm, with a 2pm matinee on November 7 and a 3pm matinee November 8. Tickets are $18 online ($20 at the door) and $15 for students. For more information, visit UtahRep.org.

The cast of “Carrie.” Photo by Jenny K Photography. 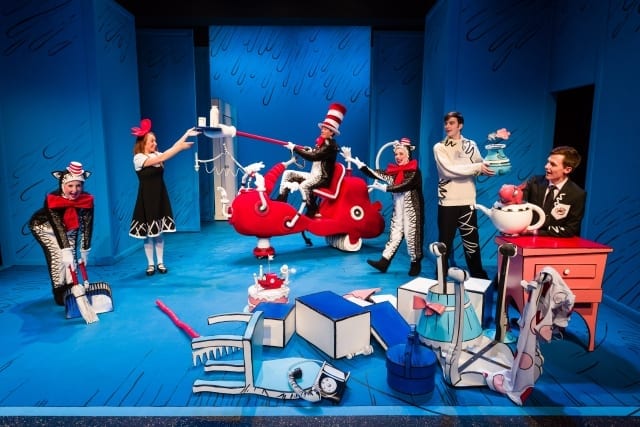