SALT LAKE CITY — If you go to The Academy of Performing Arts’ presentation of Mermaid! anticipating the show to end with the Ursula being stabbed in the belly by a ship, you’ll certainly won’t come away with what you’d expected. You will – like it or not – come away having seen the story presented as Hans Christian Anderson wrote it. Not to blame Disney: I’m sure the happily-ever-after ending sells more princess memorabilia than Anderson’s 19th Century Danish take on things. If you’ve ever read The Little Match Girl, you know what I’m talking about.

That said, I really enjoyed the play. Adapted for the stage and directed by Academy of the Performing Arts’ founder, Collin Kreuzer, Mermaid! combines modern and period dialogue while remaining true to Anderson’s original text. For the most part, the script flowed nicely, and the actors portrayed their characters well. Admittedly, though, there wasn’t much space for character development in the play considering the slew of mer-people (Ariana, her five sisters, her grandmother, and the sea witch), who are all fairly important characters, and the fact that Ariana can’t talk for the last half of the play. But each actor pulled his or her weight.

There were a few large dance scenes in which the choreography was fun but not tightly executed. I didn’t necessarily mind that, though, as I doubt drunken sailors or courtiers would be able to dance in perfect unison, anyway (another Disney innovation, to be sure). But in contrast, Ariana (Carlie Young) and Prince Phillip (Quenten Moore) presented some beautifully graceful paired dance sequences.

Mermaid! felt like an odd combination of professional and amateur theater. For example, the actors had no microphones. Because the theater in the Masonic Temple could easily seat several hundred people, this meant the audience could not always hear the actors. It also meant that the actors were forced to yell, and so the acting became secondary out of necessity. At the same time, though, Teri Reit (sound) pulled off some impressive audio effects. I was most impressed when the combined sound and lighting (Mike Harmon) created simulated fireworks for the sailors. The music, though not flawless, was lovely and fit the action perfectly.

The dialogue in this play felt somewhat secondary to the effects and the choreography. The characters’ movements are reminiscent of rippling, gently flowing water. The set (unlisted in program) for the marine world was impressively ornate, while the rest of the aquatic world was quite simple. Actors created slow ripples in large blue sheets to simulate the waves of the sea, and the lighting danced fluidly across the stage as it would if seen through water. The combined effect worked together impressively.

The costumes (designer Ellen Anderson; seamstresses Carrie Young, Ducky’s mom and sister, Peggy Carlston, Kira Bloomquist) were dazzling. The mermaids’ dresses were at once gorgeous and aquatic, the fish all looked…. like fish, and the robes of the courtiers and royalty were stunning.

All in all, I enjoyed the play. The mode of presentation—particularly the emphasis on effects and choreography—was unique, and I think it fit the setting (at the bottom of the ocean). And the authentic ending to the story had some educational and moral, not to mention historic, value. Mermaid! was definitely worth my time.

Mermaid! plays through May 22nd in the auditorium of the Salt Lake Masonic Temple.  Tickets are $8-12 with group discounts available.  For more information call the Box Office at 801-486-2728 or visit AcademyOfPA.org.

Can’t Help Falling in Love with "All Shook Up" 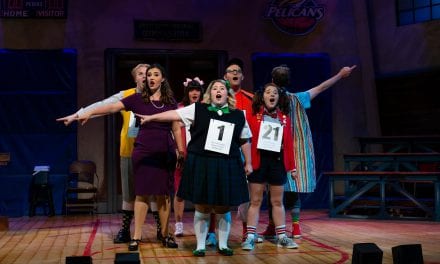