SPANISH FORK — Mark Twain‘s 1876 novel The Adventures of Tom Sawyer is a classic slice of Americana. Between the covers of the book, readers can find a celebration of American small town life, spiced up with Twain’s trademark sardonic commentary. Therefore, it makes sense that an amateur cast in a city that still retains its small-town feel would produce a stage version of Tom Sawyer’s story. The cast and crew of Spanish Fork Community Theater’s production made valiant efforts to live up to the original novel, but they fell short—mostly because of a lackluster script and score.

Adapting such an iconic novel for the stage is no easy task. Unfortunately, Ken Ludwig was the playwright in charge of bringing Tom Sawyer to life on stage. During the course of his inexplicably illustrious career, Ludwig has botched adaptations of The Three Musketeers and “A Visit from St. Nicholas,” but my perpetual optimism had me hopeful that The Adventures of Tom Sawyer would work on stage. Alas, Ludwig’s script somehow manages to tell many of the episodes from the novel in such a bland way that Mark Twain’s influence is almost completely excised. The result is a play that is as plain and featureless as a freshly whitewashed fence.

Matching the script in its banality is Don Schiltz’s score. So forgettable are most of Schiltz’s songs that I had forgotten them when the final notes finished reverberating off the theater. The only exceptions are the second act opener, “Ain’t Life Fine” and “Angels Lost.” Unfortunately, to get to these songs, an audience member must sit through all of act one, with its twelve musical numbers (and their accompanying scenes) devoid of any originality. “Hey, Tom Sawyer,” is almost a copycat of the opening number from Big River, for example. Another barrier to any enjoyment of the score is the cast’s frequently poor diction (especially in “Smart Like That,” “It Just Ain’t Me”), which made understanding the lyrics exceptionally difficult at times. For much of the show I was wishing that the music director (Krystal Bigler) had helped the cast enunciate better (and sing on key more often).

Thankfully, director Adam Cannon did not permit the lackluster script and score get in the way of creating nice scenes and moments in the show. The pivotal cave scene was the show’s best, and the urgent mood of the moment was clearly communicated (with the help of David Henry‘s set). Cannon was also effective in showing the nature of Tom Sawyer’s relationships with other characters, especially Becky Thatcher (Ondine Morgan), Huckleberry Finn (Beau Wilson), and Aunt Polly (Dana Keller). This brought a human element to the otherwise uninteresting script.

As Tom Sawyer, Coulson Bingham plays a typical male teenager: getting into trouble, liking a girl, and hanging out with his buddies. Bingham turns a nice performance, and he certainly has the vocal skills and acting ability to handle a lead role in a production like this. Bingham’s best scenes were with Morgan, and the sweet teenage infatuation between Tom and Becky paid off in the second act when their ups and downs felt realistic. Wilson’s Huckleberry Finn also seemed like a realistic teenager, though the script makes the psychological differences between the two characters negligible. Wilson’s main weakness in the show was his poor diction, which made much of his dialogue (especially in Act I) unintelligible.

The leading women of the play, Morgan and Keller, were suitable for their roles. Morgan was adorable in the schoolhouse scene, and it was easy to see how Tom Sawyer could notice Becky. Keller was a loving, but frazzled Aunt Polly, and I enjoyed her interactions with Tom and Sid (with the scene where she comforts Tom after his nightmare being the best).

In addition to the excellent cave set I mentioned, David Henry’s set for the town was exquisite. The detailed street scene helped create St. Petersburg and old-time Missouri in the indoor auditorium where the performance took place. Mareen Robinson‘s costumes were also effective in re-creating the time period, although a few modern pieces (such as Muff Potter’s shoes or some ensemble members’ shirts) disrupted the look that the rest of the period costumes had created.

Although the show has problems, most of them are either easily corrected—such as the diction problems—or are out of the control of the cast and creative team (i.e., the script and score). I enjoyed the live 5-piece orchestra and watching the camaraderie that has built up among the cast members. And although I am certainly not a fan of the adaptation, longtime Spanish Fork residents may appreciate the nostalgia for a time before the encroaching suburbs of Utah County encroached on their way of life. 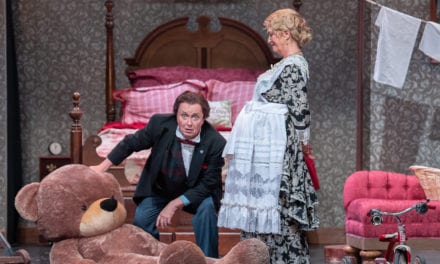