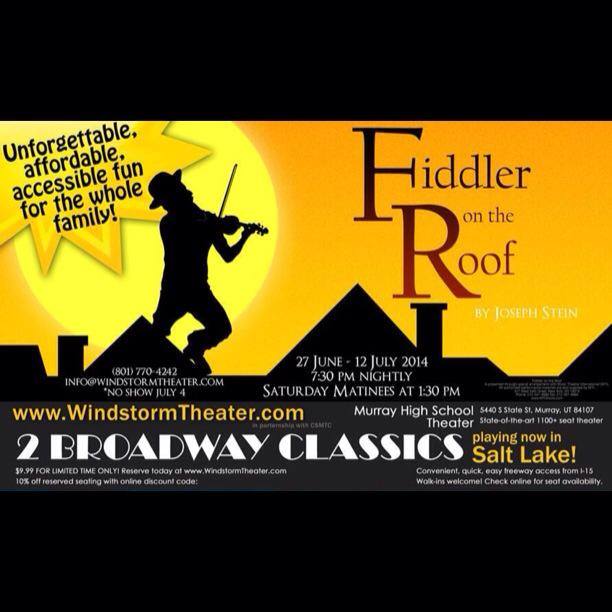 MURRAY — Fiddler on the Roof is arguably one of the best known and loved Broadway musicals ever since its premiere in 1964. The 1971 film adaptation added to the musical’s renown, and it is one of the most popular musicals in Utah. Windstorm Theater Company brings their new production of this musical to Murray High School. I only wish it had lived up to these expectations. The familiar story, based on stories by Sholem Aleichem, tells of a Russian Jewish village, Anatevka, and the lives of a dairyman, Tevye, and his family. The trials of Tevye and his family trying to maintain their traditions in the midst of a changing world are as relevant today as they were when the musical first opened. I know that I personally find much greater connection to the story now that I am older with children of my own than I did when I first saw the show. It seems to especially resonate with audiences in Utah.

The show opens with a lone fiddler (Lizzy Palmatier) atop one of the set houses for the village. Palmatier, the current Miss Sandy, is an extremely talented performer. Her violin solos throughout the evening were by far the highlight of the show. She has a clear, ringing tone that accentuates every scene she is a part of. They lend joy and pathos in the right measure to help create the mystique of the show. Jeff Raddatz has the look that I have come to expect and does a good job of acting the part of Tevye. He has a fine voice that is particularly showcased in the second act on “Chavela.” Raddatz conveys strong emotion and feeling. However, there is a disconnect between his speaking voice and his singing voice. The character choices that he makes in his speaking voice don’t carry over to his singing voice and although the singing is fine, it is a bit jarring because the character did not feel seamless. Ruth Ann Patten as Golde, Tevye’s wife, is a delight. She does a very good job of both acting and singing the role, and her connection to the children feels authentic. I did not feel that same connection to Tevye, and that made their duet in the second act seem like a missed opportunity for genuine emotion.

Cecily Olsen, Jillian Bjornn and Alisha Green (as the daughters Tzeitel, Hodel, and Chava, respectively) all performed “Matchmaker, Matchmaker,” their first act trio, delightfully. It captured the innocence of their youth and gave them a great introduction in the show. Gary Pimentel as Lazar Wolf and Bennett Floyd as the Constable were both equally strong supporting players. Pimentel did an excellent job with “To Life,” his duet with Tevye. He had an authentic accent and maintained it throughout the evening. Floyd also captured the accent and was a strong character with enough menace to propel the action in his scenes. The program does not list a designer for the costumes, but they all had a consistent look and authentic feel.

Unfortunately, most other elements of the production came up lacking. The sound design, again uncredited, was among the worst I have encountered in a community theatre production. Leads came on stage with mikes either off or turned so low that the actors could not be heard. The mix between recorded orchestra and miked actors seemed off in almost every song. In one of the most loved scenes of the show, “The Dream,” Barbara Dorn playing Grandma Tzeitel could not even be heard. Every line she sang was lost. In addition to that, the scene included aerial choreography with two silk dancers and Jenny Bauman as Fruma-Sarah doing what was billed as “aerial cirque” choreography. When the curtain opened to these aerialist, I could tell that the two aerialists on either side of Bauman were dressed in skeletal costumes, but immediately the lights were dimmed and I couldn’t really see much after that. I applaud Windstorm for trying to add a unique element to their shows, but this added little to the scene, and the aerial choreography by Ramsi Stoker was nice, but not spectacular. Moreover, in this scene, the whole was less than the sum of its parts. I can remember being scared by the dream sequence, or at least enjoying the images of the dream. But in order to showcase the aerialist, the chorus was relegated to the back of the stage, and that spectacle was lost, sacrificed to some lackluster spectacle that lessened the scene’s impact.

There were also several choices made by director Gavin Grooms that left me scratching my head: Why was Motel the tailor (Andrew Whittaker) in the “To Life” scene? This is the man trying to get up the nerve to ask Tevye for Tzeitel’s hand. When he hears the news that Lazar Wolf is to marry her, he looks crestfallen for a moment, drinks everyone’s left over drinks, and then joins in the dancing. It doesn’t make any sense at all, not even with a small cast and and a huge need for men on stage. Why were there only three Russians when the wedding ceremony is trashed at the end of Act One? Certainly some of the men could have slipped off and quickly changed costume to make the scene more menacing. And why did he wander out on stage to tell the audience, “There will be a 10 minute intermission while we clean up this mess”?

I anticipate each new production I am lucky enough to review, and sincerely hope that it will be a great experience. This production of Fiddler on the Roof, however, was a disappointment made worse by the few shining moments that teased the potential that could have been.

The Windstorm Theater Company production of Fiddler on the Roof performs nightly through July 12 at 7:30 PM, and at 1:30 PM on July 12 at Murray High School (5440 South State Street, Murray). Tickets are $7.99-9.99. For more information, visit www.windstormtheater.com.