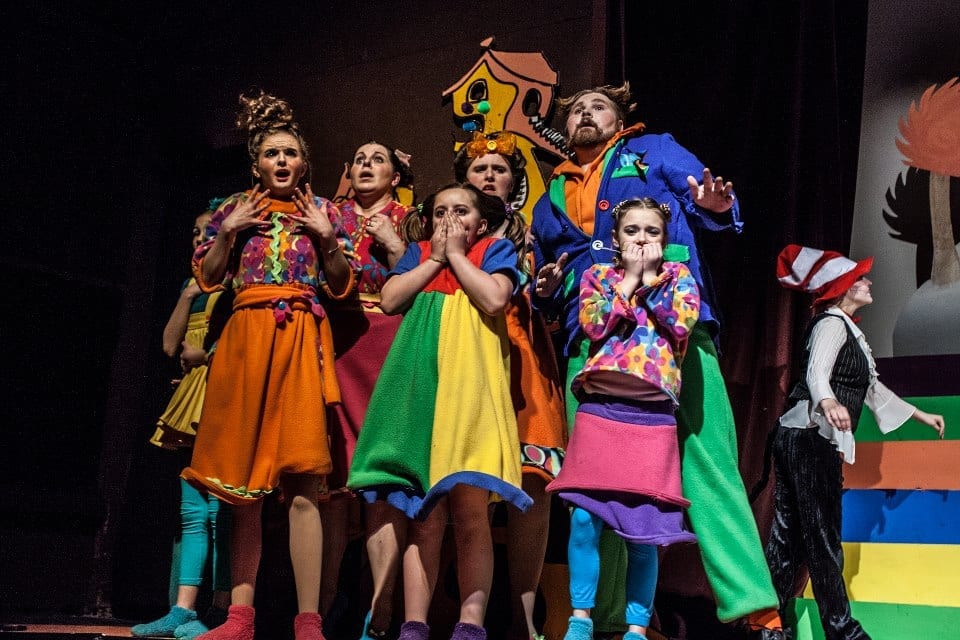 OGDEN — The Ziegfeld Theater debuts their first family musical of the season. The new theater, commonly referred to as “the Zig,” takes a change of course from their standard theater, which included such shows as Next to Normal and Dirty Rotten Scoundrels to attract a different type of audience. Families, children, and grandparents filled the auditorium to support the large cast of over 30, including many children and teenagers. Seussical is a musical by Lynn Ahrens and Stephen Flaherty based on the works of Dr. Seuss, combining and intertwining many of his popular stories and characters, ranging from The Cat in the Hat to the Who’s of Whoville, into an original new story written by Ahrens and Flaherty. The message of Seussical is that it is OK to be different and each person, no matter how small, can make a difference in the world. This production was pretty typical of most community theater or arts council productions in the state. Not particularly good, but not terrible. The two major problems with this production was first the directing, followed by the many new comers to the theater that lacked the technique and talent to present a polished performance. My major complaint was that director Morgan Parry lacked any clear theme or shape to the show or individual scenes. This made for a very choppy and unfocused production that was hard to follow the storyline, especially the scenes that had the full cast on stage. The show needed a through-line and much smoother transitions between the scenes and numbers; the absence of changes in tension and mood made the entire show feel on one level. Second, the acting on the whole was very surface-level. On the Ziegfeld stage all the characters in Dr. Seuss’s many storybooks are mere caricatures given a cartoonish shape. But if there is no depth to these characters, they become very uninteresting quite quickly. As such, with a few exceptions there was very little honesty to the characters and the audience got a “one trick pony” from most of the actors, with a significant lack of choices or discoveries from the characters throughout the show. The leads in the show all suffered from the same problem: playing cartoon characters, rather than creating real dimensional characters that were grounded and motivating choices from a place of honesty (who happened to live in a fantastical world). I place most of this blame on the director combined with inexperienced actors made it less than a quality production. Such examples of this include: Horton (Phil Etter), though he had the strongest voice of the show—a beautiful baritone which was clearly heard throughout the evening in his many solos and duets—had acting that was void of choices and not a very believable line delivery. Etter did a lot of showing and mugging instead of connecting to his scene partners and failed to give an honest or dimensional portrayal of the role. I had trouble seeing any chemistry with him and Gertrude or notice any subtext to his lines or songs which would have helped to better reveal his feelings in the lines he was delivering. Careshmeh Bell (as The Sour Kangaroo) had a strong belt voice, though didn’t do much for creating a character, and her vocal riffs often went a bit off pitch or the sliding to the next notes were a little choppy and not as smooth as needed. There were a lot of unanswered questions on her particular character, which stemmed mainly from her lack of listening and responding to the other actors on stage. I didn’t get a since of how Bell’s character felt about the other characters in the scenes, and she seemed to move from solo to solo without using the music to progress the story or reveal elements of her character. Becca Coleman (as Jo Jo) was very cute and resembled the little who girl from How the Grinch Stole Christmas, but did not give a believable portrayal of the role and most of her lines sounded like recited line readings. Listening to the other actors on stage and insuring that the subtext of each line was clear would have strengthened her performance; but for such a young actress she is off to a great start and she did have a very pretty singing voice. Erica Choffel (as The Cat in the Hat) gave a stronger performance on the whole than most of her fellow actors. She made a lot of fun choices as the various characters she played, and showed real commitment to the large choices and various comedic bits throughout the play. However, though her presentational style worked well in many of the scenes, it didn’t work in certain scenes where real communication and honesty was needed. In these scenes the large presentational style made her come across as overacting and not really communicating with her scene partner, and she needed to ground her character a bit more in these scenes so that there was real listening and responding taking place. Choffel needed to ground her character a bit more and add greater dimension to the role. Heidi Porter Hunt (as Gertrude McFuzz) was the strongest actress of the evening. She had a well-trained voice and had some nice moments in the show. Hunt embraced the awkwardness of the character and did create some dimension to her character. However, I wanted her to go much further with her choices and take some risks. She was not always fully committed to the choices she made, and she was too conservative in the creation of her character. This kept her from giving a memorable performance.

Shelby Thomas (playing Mayzie LaBird) was a decent actress and a great dancer. She encompassed the character physically very well. However, vocally she was much too small and didn’t match the large physical choices she made. Additionally her poor diction made it difficult to understand a lot of her lines, and she was frequently off pitch in her solo numbers. On the other hand, Samuel Babcock, Paul Calvo, and Devin Turner (as The Wickersham Bros) were fun to watch and brought a lot of energy to each of their scenes and had some nice vocal harmonies. The three performers responded well to the other actors on stage and supported their castmates without pulling focus from them.

The rest of the large ensemble was full of energy and had some fun choreography and Lauren Merril, the choreographer, did a nice job with the talent level of the dancers and the space to keep the numbers simple and clean and precisely executed. However, it was hard to understand the lyrics in these group numbers due to poor diction and sound balance and I wish that the music director, Careshmeh Bell, would have helped the actors to enunciate more clearly so that the audience could better understand the words. Moreover, some of the ensemble members often drew attention away from the main action on stage in many of the scenes and upstaged the principals frequently. This led to many scenes that were messy and disorderly. The pre-recorded music used for the show were too loud and often overpowered the voices and failed to create the proper mix. This further contributed to the difficulty in following the story.

By contrast the costumes, make-up and set (under the supervision of artistic director Rick Rea) were definitely higher quality than most community theater productions. The array of colors and great detail in each costume made for a visually impressive production and created the world of Dr. Seuss nicely. I had no problem believing that I was flipping through the pages of a Dr. Seuss book with each scene. The Whoville costumes especially stood out as being exceptionally well designed and captured the style from How the Grinch Stole Christmas perfectly. Also the lighting, designed by Gerald Howells, was nicely done and accented the set and costumes well with an array of colors and isolated the main action on stage, helping the audience to know where to focus their attention.

On the whole, Seussical: The Musical is a fun evening. Though this production has now closed, my recommendation would have been as follows: If you don’t consider yourself a theater snob and live near the Zig, this is a cute production that you can bring the kids to for an entertaining, fast paced and fairly short musical that will keep their attention. But Seussical is not worth a long drive to Ogden if you aren’t already nearby  because there is probably a closer community theater production of similar caliber. 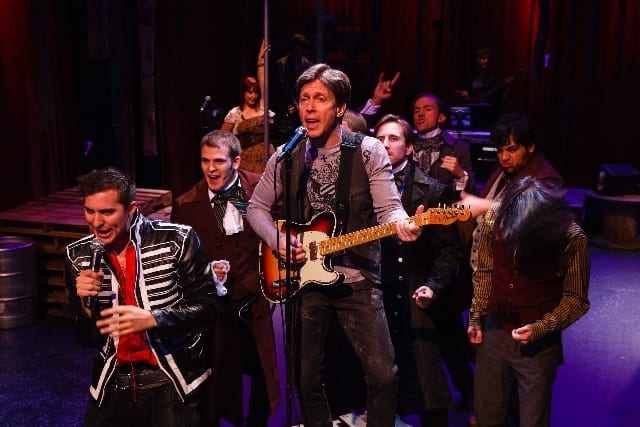