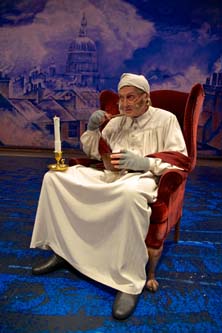 SALT LAKE CITY — Can a show be top-notch quality and still fall flat? Pioneer Theatre Company’s production of A Christmas Carol: The Musical (music by Alan Menken, lyrics by Lynn Ahrens, book by Mike Ockrent and Lynn Ahrens), directed and choreographed by Karen Azenberg was very professionally done and quite entertaining. Yet despite that fact, I still came away from the show an unsatisfied audience member as one thing was missing for me—the heart. I should explain myself. Saying a production had “heart” to me means: first, that despite possible imperfections, the cast showed such honesty of emotion and spirit that they were able to emotionally touch audience members, even to the point of motivating change. Second, having “heart” indicates that the cast gave their all in their performance and seemed to internalize and at least act in belief of the show’s meaning. The worst singer can have the most “heart” in a performance by putting all of him or herself “out there” emotionally and acting in full belief of their character. At the same time, the most accomplished singers, dancers, and actors can perform impeccably—but still lack that extra something that makes live theatre a means of communicating humanity rather than just plain entertainment.

As I’ve mentioned, the show itself was enjoyable to experience. As a whole, the cast were all strong singers—with a marvelous pit orchestra accompanying—led by musical director and conductor Tom Griffin. The voices blended well and the timbre of the entire company singing together was beautiful to hear. My favorite musical numbers include “Nothing to Do with Me”—a song consisting of momentary scenes involving Scrooge (Jamie Jackson) and concluding powerfully with the company; the fun and upbeat burlesque-inspired, “Abundance and Charity,” featuring the energetic Ghost of Christmas Present (Gerry McIntyre); and the closing songs, “Finale” and “God Bless Us Everyone.”

The show’s two biggest stars in my opinion were clearly Kevin Earley as Bob Cratchit and Jamie Jackson as Ebenezer Scrooge. Earley’s Bob Cratchit was down-to-earth, charismatic, and quirkily funny and light. Every scene was improved when it had Earley in it, and he was constantly professional yet still seemed emotionally connected. Cratchit’s relationships with others were the most fun to watch—whether cowering good-naturedly beside the domineering Scrooge, lovingly greeting Mrs. Cratchit (Shalee Mortensen Schmidt) with a flirty playfulness upon arriving home for Christmas Eve, or anytime tenderly interacting with Tiny Tim (Anson Bagley). I loved seeing the contrast between Bob and Scrooge—total opposites at the beginning of the play, yet unlikely comrades by the end. Jamie Jackson’s Ebenezer Scrooge in a lot of ways carried the show, as the entire plot revolves around Scrooge and his past, present, and future. Jackson’s Scrooge most impressed me in how his character’s mannerisms gradually rather than instantly transformed throughout the show (constantly abrasive facial expressions turned to giddy smiles; a sour, scratchy, and gruff voice became energetic and joyful; and a hunched and tightly wound physical body revived to become loose and bouncy). I appreciated how Jackson’s Scrooge didn’t instantly become Mr. Wonderful after being with the Ghost of Christmas Past (Ephie Aardema). As played by Jackson, Scrooge actually reacts to Christmas Past with defensiveness as he starts to acknowledge his regrets, opening his heart just a bit. After the Christmas Present scenes, Jackson’s Scrooge smiles occasionally rather than scowling constantly and walks more uprightly and at ease. And in the final scenes of the show, Scrooge has undergone a full transformation—but without perfection, as shown in his momentary outrage at hearing the price of the prize turkey—a habitual contempt that is quickly tamed to the kindness that reflects Scrooge’s new life.

Production elements were mostly perfect, including the flawless lighting (Phil Monat) and sound (Matthew Tibbs). The costumes (designed by Carol Wells-Day) all appeared time-period-appropriate and formed a mellow Christmas-y canvas of muted reds, dark greens and blues, browns, mauve, black, and gold. Though beautifully designed overall, the fit on some of the dresses’ bodices was way too loose, particularly during, “Mr. Fezziwig’s Annual Christmas Ball,” during which one female cast member’s bra straps were showing the entire time because her dress was too big—an admittedly minor detail that nonetheless distracted from the scene.

The set (by George Maxwell) was designed with an artistic rather than realist vision in a shimmery, painted two-dimensional setup of buildings and homes. Three-dimensional windows and doors and lifelike street lamps spaced throughout the stage added needed depth. I admit that the lack of emotional connection I felt to the play may in large part be due to the script. Though highly watchable—particularly during such moments as the catchy, “Link by Link,” sung by a horde of zombie-esque ghosts led by the Ghost of Jacob Marley (Justin Ivie)—the script feels overly rushed in some of its transitions, forcing what would be impactful scenes to become just passing moments. This over-pacing of the script is most notable in the Christmas Future scenes, as the clipping music forces Scrooge to transition much too quickly from watching the Cratchit family mourn for Tiny Tim at the end of “Dancing on Your Grave” to grieving Scrooge’s own tombstone in “Yesterday, Today, and Tomorrow.” This latter song represents the climax of the play—the time when Scrooge finally realizes that there are consequences to his bah-humbugs and poor treatment of his fellowmen. Though Jackson does pull off a believable and touching transformation, this transition really needed to be slowed down to be properly ingested by the audience, allowing Scrooge’s change of heart to be that much sweeter. Instead, the script has this moment thrown together so fast that the scene becomes confusing and muddled, making it difficult to empathize with Scrooge.

The script aside, the performance of the cast fell a bit short. Though the ensemble members smiled and seemed to act appropriately to each scene, they were not convincing in their portrayals overall and so lacked the full force of emotional intensity this show so needs. In the song “Christmas Together,” for example, the performers sang all the right notes and sounded beautiful, but they didn’t seem to feel the message of the song. Basically, the ensemble felt like they were only giving some of their effort and energy—leading to a shortage of Christmas spirit in a play that absolutely depends on it. Happily, Jackson’s Scrooge almost singlehandedly redeems the play from this weakness with a huge dose of Christmas spirit and joy in the final scenes. His giddiness at having a second chance at life is contagious and heartfelt. Yet this surge of Christmas joy feels almost too little, too late, as I so wished the ensemble could have matched half of Scrooge’s emotionally powerful performance in the rest of the show.

This show was entertaining and filled with amazing performances, but lacked a full measure of the Christmas spirit I so craved from this production.  Overall, PTC’s A Christmas Carol nailed the carol part alright, but could still use a little more Christmas.

A Christmas Carol: The Musical plays at the Pioneer Theatre (300 South 1400 East, Salt Lake City) on Monday through Thursday evenings at 7:30 pm, Friday and Saturday evenings at 8 pm, with a 2 pm Saturday matinee through December 15. Tickets are $38-59. For more information, visit www.pioneertheatre.org. 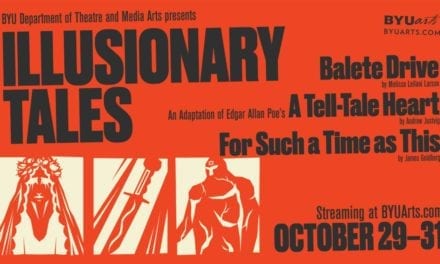