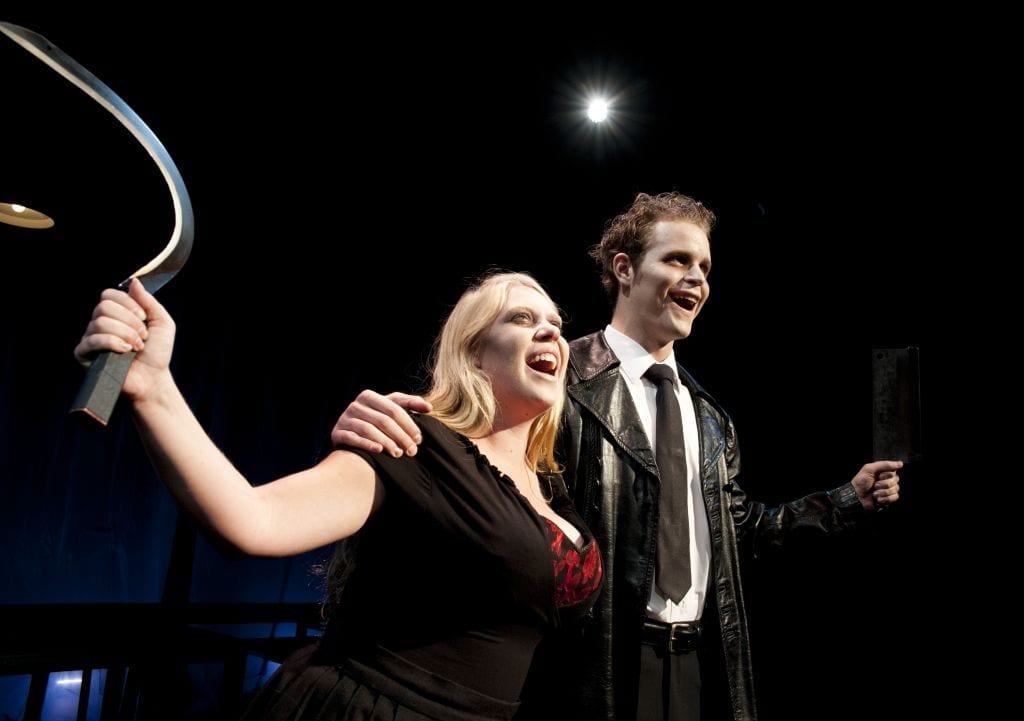 SALT LAKE CITY — My first encounter with Sweeney Todd: The Demon Barber of Fleet Street (book by Hugh Wheeler, music and lyrics by Stephen Sondheim) was in my junior year of high school. I was performing in a musical review, and Sweeney Todd’s musical hook provided a six-second transition from one song to the next; we simply sang: “the demon barber of Fleet—Street.” Yet the rhythmic syncopation, the succinctness of the words, and the concept of a demonic barber stayed with me beyond those few moments. I have since become more familiar with the musical, learning the basic plot and many of the songs. I have seen only slices of Tim Burton’s cinematic version and as of last week had never seen Sweeney Todd performed on stage—a fact which is now remedied thanks to University of Utah’s Studio 115.

Though I pounced on the opportunity to finally see Sweeney Todd in its entirety, I approached this show with some trepidation. I wondered how the U of U’s Department of Theatre would present the violence and madness of the show, and worried the production might become overshadowed by technical aspects such as excess or poorly presented gore.

I could not have been more wrong.

This production of Sweeney Todd constituted one of the best marriages of performance and production elements that I have ever seen. The set designed by Gage Williams was simple, but powerful—a black-box stage with only a few chairs, a black coffin propped by legs, and a table and chair “barbershop” on risers upstage. Behind the barbershop setup were clear, plastic curtains—the kind reminiscent of quarantined hospital rooms. These curtains were lit from behind with varying degrees of light and color depending on a scene’s mood (as designed by lighting designer Michele Collins). The actors, all of whom were onstage during the majority of the production, created the setting: an insane asylum. When actors weren’t directly involved in a scene, they settled into spaces around the stage and acted insane—mumbling to themselves, rocking back and forth, or staring blankly at nothing in particular. The actors’ performances were enhanced by their insane asylum-inspired costumes (designed by Amanda Andrews) and particularly by their makeup, designed by Erin Foley and Elise Russon Harris. Foley and Harris gave each actor a zombie-like appearance with dark eye circles, facial blemishes such as tears and gouged spots, and ashen skin. These elements combined to form both an unsettling and perfect accompaniment to the plot and the discordant—at times unhinging—score. Austin John Smith as Anthony and Arielle Schmidt as Johanna in Sweeney Todd at Studio 115. Photo by Spencer Sandstrom.

Sondheim’s music in this show is brilliant and troubling in its melodies and its lyrics. The music is often syncopated and contains erratic rhythms—such as in the changing rhythm of the hook “fleet—street” in various parts of the show. This is a difficult score to execute, requiring a talented music director who can guide already strong singers. Music director Alex Marshall delivered.

It is hard to pick favorites among the performers as everyone gave a strong performance—but I have to mention Joseph M. Bosteder who played Sweeney Todd. Though the show is double cast for many of the characters, Bosteder is single cast—a fact which in itself is astounding. The insane intensity and palpable dark energy he gives the character must be exhausting physically, emotionally, and perhaps mentally as well. Bosteder played a Sweeney Todd who is so twisted and consumed by revenge and madness that every line, every glance is with obvious intention. A few stand-out moments in Bosteder’s performance were his sudden laugh as he finally understood Mrs. Lovett’s (Karli Rose Lowry) plan in “A Little Priest,” his emotional range in finally confronting the perfectly villainous Judge Turpin (Mason Holmstead), and even an emotional softness as he mourns in “Final Sequence.” Bosteder’s singing voice was also powerful and passionate, conveying emotion in beautiful rawness. Karli Rose Lowry nailed the part of Mrs. Lovett, and I particularly appreciated how she tamed her obviously trained singing voice to fit the quirkiness of the character. She also was able to be hilarious in a dead-pan, usually ironic way—most notably in “The Worst Pies in London” and “A Little Priest.” The heartbreaker of the show was the boyish Tobias Ragg played by Dylan Adams. His sweetness and innocence juxtaposed perfectly against the horrors around him—making them all the more terrible. Adams’ singing perfectly matched his character with his smooth, clear voice, particularly on the tender “Not While I’m Around,” which gave me goose bumps.

A few other characters I need to mention are Jackie Jensen’s Johanna, who was fragile and beautifully disturbed; Trevor Blair’s Beadle Bamford, who was beyond creepy yet humorously so somehow; and Lauren Rathbun’s Beggar Woman, who was at once comedic relief but also a sad example of helpless insanity.

Normally, I get so engrossed in the “world” of a performance that I have to remind myself to notice behind-the-scenes elements like direction, but this play was so impeccably put together stylistically and artistically that director David Schmidt deserves major applause. The blocking of the actors was always well-spaced—important with the three-sided seating arrangement—and the acting was consistent and only added to the overall dark madness of the show. Each actor seemed to be on the same “plane”—everyone echoing the same thematic timbre of show they were creating, as asserted in the very first song of the show, “The Ballad of Sweeney Todd.” During this number, the actors moved with deliberation and sang with intense precision. Like many in the musical, this song has moments where it threatens to deconstruct as melodies pile up and the song’s form nearly breaks apart.

This production is not for children and all attending should be warned that it has strong gore, sexual content (brief but powerful), and some swearing. Consider this show if you want to experience a production whose rawness and passion will stay with you and play in your mind for days. Joseph M. Bosteder as Sweeney Todd and Tia Galanis as the Beggar Woman in Sweeney Todd at Studio 115. Photo by Spencer Sandstrom. 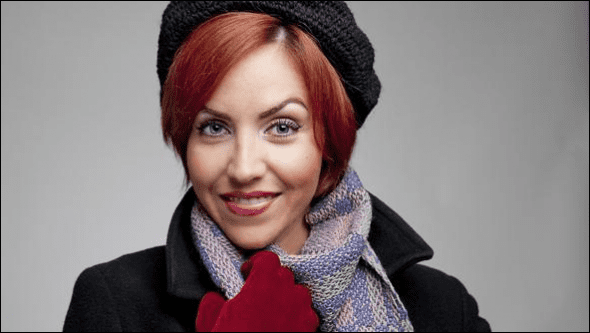 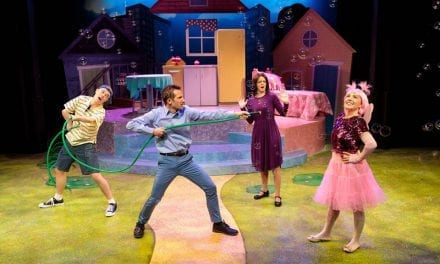