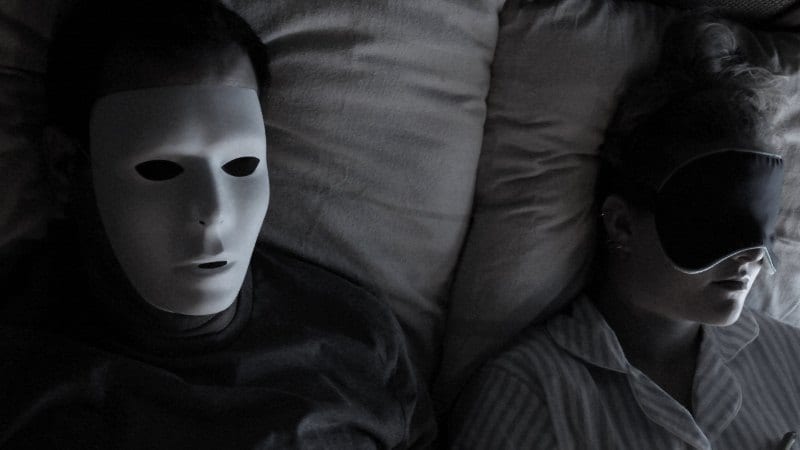 SALT LAKE CITY — As a playwright and a theatre teacher, I am always excited to see new work. Saturday night at the Sugar Space was no exception, as I had the chance to see and experience Who Are You?, a new play written and directed by Jared Greathouse and produced by the Hive Theatre Company. Who Are You? is the story of what could happen when a woman wakes up one morning and doesn’t recognize the man sharing her bed. I don’t want to give away the plot as there are a number of twists, and a lot of the comedy relies on the power of surprise. I will go as far as to say Jerry and Stephanie Bickmore—the couple at the center of this dark comedy—go through a major identity crisis as the play progresses.

There is a lot of potential for fun in this script. I admire Greathouse for abandoning what could have been an ordinary romantic comedy in favor of tackling something more exciting and bizarre. The show is very simple, its design very straightforward, allowing the audience to focus on the performances and the script. The cast (Tiffany A. Greathouse, Nate Keyvani, Elise C. Hanson, Joel Pepino, Victoria Gonzalez, Christopher Stephenson, Michele Rideout, Andy Maizner, Dave Bohnet, Eric Leckman) all seemed to be having a good time, and there were some nice moments of chemistry among them—again, I can’t get too specific without spoiling the plot. However, while I appreciate what I think Greathouse is trying to do with this piece of theatre, I don’t know that it was quite accomplished.

I love theatre that forces me to think. That asks questions that require thought and contemplation on the part of the audience. At the same time, there are a certain number of questions that the play should also answer as its story unfolds on stage. While Who Are You? asks a number of deep, fascinating philosophical questions—and that I applaud—I don’t know that it answers all of the structural and theatrical questions its audience requires.

For example, I’m not sure exactly what the rules of this particular world are. There are some funny moments—one of my favorites was a bit in which Jerry doesn’t realize he’s speaking Spanish. While many of these moments are very enjoyable, they don’t track with the structure of the story. Why does Jerry click into Spanish mode? The lights simply come up and he does. And then after a bump to the head—I think—he’s back to speaking English. It’s a device used twice—the second time much more briefly than the first—and then never again. There are a lot of quick, fun moments that don’t quite add up. Cell phones don’t work, boxer shorts get flashed, bananas are thrown around, and the shifts between scenes are slightly reminiscent of the classic comedy film Groundhog Day. Sure, it’s funny, but does it move the story forward? On top of all this, there are voices that speak to Jerry from the audience, criticizing his work as a playwright. No one hears these voices but Jerry. Is he losing his mind? When he looks in the mirror, he doesn’t see himself. Is he going crazy? Am I going crazy right alongside him? The thing is, after seeing this show, I don’t know much about it. Who is Jerry Bickmore? What does he want? I can’t tell you the answer to either question, and usually I leave a show at least knowing what the protagonist wants, and what he or she is willing to do to get it. Near the beginning of the first scene, Jerry expresses to Stephanie some of his frustration as a playwright. Is that frustration the fuel for anything else that happens in the show? Is Jerry suffering from low self-esteem? Is he contemplating suicide? Did he recently have his work rejected? I can only guess as to the genesis for the absurdities that happened on stage.

All of the action happens in the Bickmores’ bedroom. While this is a house where things are clearly out of the ordinary, no one tries to escape it. No one tries to flee through a window or bang their way out the front door. What is keeping everyone inside the house? There are several moments in which Jerry’s life is in danger. Why doesn’t he ever try to get out—literally try to escape? He doesn’t; he just stays on stage and lets weird things happen to him. I don’t understand why Jerry stays. Or why Stephanie stays, for that matter. She screams when she first looks Jerry in the eye—she screams and defends herself, claiming he isn’t her husband. But she doesn’t do what a lot of people in a similar situation would do—she doesn’t run away. She stays and, eventually, just accepts him for who he claims to be.

I found myself doing pretty much the same thing—letting myself accept what was happening because I couldn’t figure out what else to do with what I was seeing.

The biggest question for me throughout the evening was simply this: Why? Why was all of this happening? The end of the show is quite dark, which doesn’t really mesh with the romantically comic tone first set between Jeff and Stephanie. I was left unsure in the end what to believe—was it all real? Or just a dream? Does Jeff Bickmore really exist? Is Jeff Bickmore really Jared Greathouse, and Jared doesn’t know it? There are so many fascinating questions posed in Who Are You?. Sadly, for me, there just weren’t enough answers.

The Hive Theatre Company’s Who Are You? plays at the Sugar Space Studio for the Arts (616 Wilmington Ave., Salt Lake City) October 12 and 13 at 7:30 PM. Tickets are $12. For more information, visit thehivetheatre.blogspot.com. 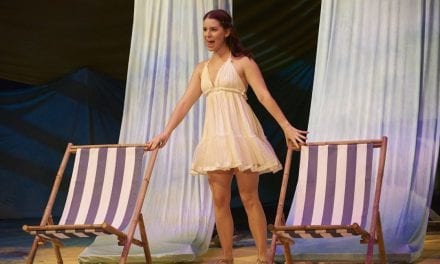 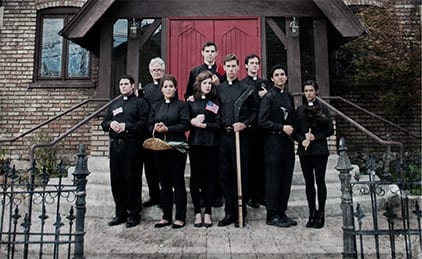 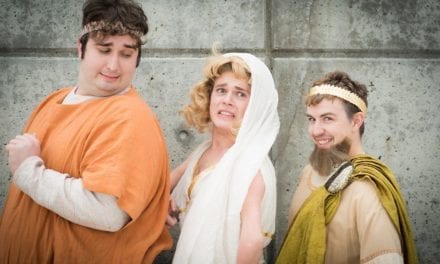