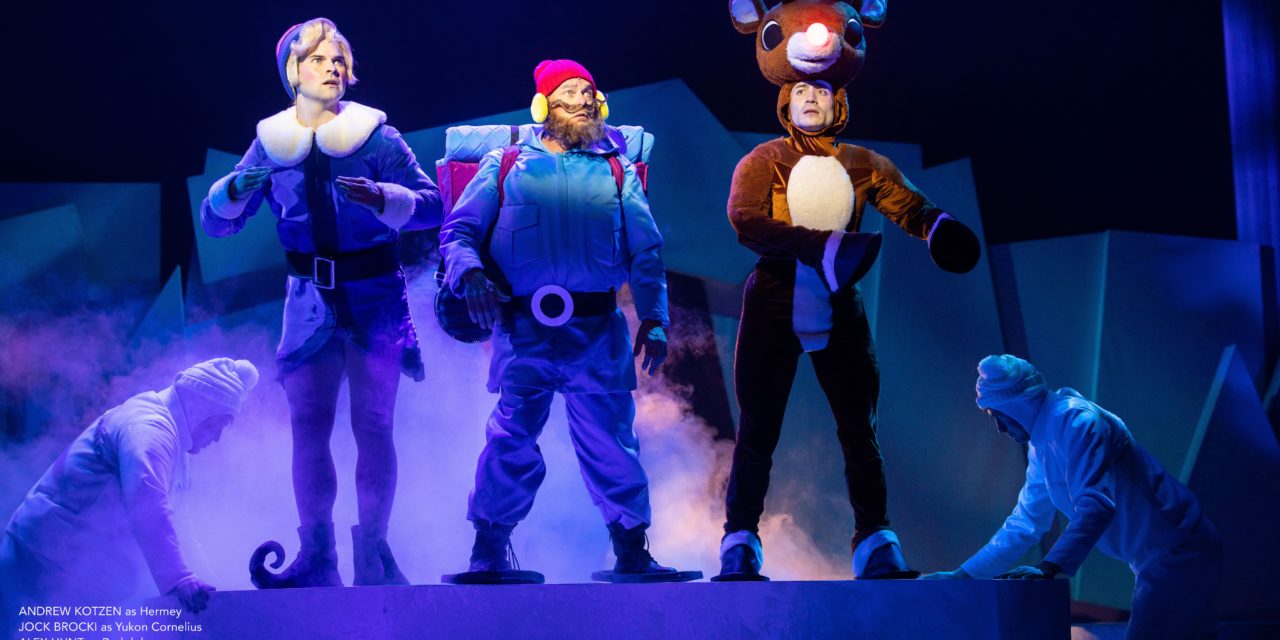 IVINS — On Saturday, November 26, I trekked from my home in Utah County to the Indoor Hafen Theatre at Tuacahn to see Rudolph the Red-Nosed Reindeer if Rudolph’s red nose would be a beacon for a wonderful start towards the new year . . . or a warning sign to stay home. With a combination of on-point nostalgic recreation, and masterful and cheery puppetry, Tuachan’s production of Rudolph the Red Nosed Reindeer (with music and lyrics by Johnny Marks and a script adapted by Robert Penola) shines brightly and this holiday season.

On opening night at Tuacahn performances often feature warm welcomes from administrators and directors. When director Alan Coats addressed the audience and spoke about his hope for audience members to engage, I was thrilled. One of the great joys of live theatre is the invitation for the audience to be present and involved with supporting the performers on stage. Sam the Snowman, played by a jubilant Rendell DeBose, was a wonderful facilitator and had my 6-year-old son answering questions, singing along, and truly playing with the characters. In addition to being a great ball of energy that lifted the whole performance, DeBose masterfully travelled the stage with tiny penguin steps in an onerous Snowman costume that looked strikingly like the cartoon.

This was intentional, of course. While audiences may have forgiven deviations from the 1964 TV special that the play is based on, the stage production’s creators would not. Miniscule details — down to the color of paint for Santa’s sled — had to be approved in order for Tuacahn to mount the show. Mounting a show that runs through the holidays is always a major undertaking and a sacrifice for performers, production staff and technical crew, and no details were neglected in matching the iconic look of the original claymation story. 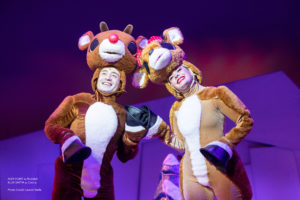 Left to right: Alex Hunt as Rudolph and Ellie Smith as Clarice. Photo by Leavitt Wells.

The ensemble work was strong in this performance. Coats developed tight choreography that had direct nods to the TV version, and the actors played well. Footwork was a key part of it as elves took little steps to diminish their size, Santa walked with a stern and serious cadence, and the reindeer pranced across the stage with elegance and grace in costumes that were expertly crafted and thematically perfect (but looked difficult to move in, with reindeer head hoods featuring various sizes of antlers).

I have previously criticized theatre for young audience productions for having acting that is cutesy instead of genuine, but Rudolph is different. The nature of this show demanded that cutesy in order to be genuine. With the desire to recrate in real time the charm and nostalgia the story is known for, I was pleased to see beaming smiles, dramatized expressions and simple characterization. However, I also enjoyed the richer and more dynamic approach that Jack Brocki brought to Yukon Cornelius. The Cornelius costume still featured a wacky mustache and pickaxe gimmicks, but Brocki brought his A-game to what could be a one-note character. His face was a living tapestry of vivid expressions and humorous self reflection that only a strong actor can deliver. Brocki had great on-stage connection with Andrew Kotzen’s Hermey and Alex Hunt’s Rudolph. Their journey through the ice to the Island of Misfit Toys showed strong actors conveying high stakes that were engaging for adults and authentic to children. The three had good timing and humor and seemed like they would be a smart combination in any show. 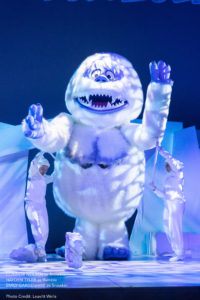 Left to right: Connor Nielsen as Snowkin, Hayden Tyler as Bumble, and Emily Gardenhire as Snowkin. Photo by Leavitt Wells.

The scenic design by Thomas Muraney was simple but fitting for this show. I particularly loved the multi-use platforms that be converted to be icebergs, mountains, or trees. The rolling Christmas trees matched the look of the cartoon and brought the claymation to life on stage. I also noticed the beautiful lighting design by Rob Siler for this production. Siler’s team utilized a white stage well to show the romance of Rudolph and Clarice, the sorrow of the mistfit toys, and the terrifying rumble of the giant bumble. Lighting was a character in the story and was crisp in every scene.

My favorite aspect of the show was the puppets designed by Hardrive Productions. The bumble was enormous and as well crafted a puppet as any I have ever seen. Massive puppets seem to have become more popular on Utah stages, and I am here for it. Puppets like the Bumble and the Parker Theatre’s Pumpkin Giant elevate a show and remind audiences why live theatre is such a different experience from the silver screen. The ensemble used smaller puppets to play toys, bunnies, and other characters well, which added another layer of child-friendly fun to an already enjoyable production. My son was enamored with the glowing nose of the baby Rudolph puppet, and I appreciated Jessica Becker’s skilled technique in manipulating it.

Rudolph the Red-Nosed Reindeer had enough charm and magic to fill the Christmas season. The show is packed with delightful moments, such as when Rudolph take flight when he was playing Reindeer games (which led to many gasps of joy from surrounding children). And you are unlikely to get closer to snow in Washington County than the end of this production. Ultimately, Rudolph was a bouncy and nostalgic show that made me ready to spend every day listening to carols and every night watching Hallmark movies. While not everyone celebrates Christmas, seeing Rudolph the Red-Nosed Reindeer at Tuacahn makes the winter season special for audiences of all ages.

The Tuacahn Center for the Arts production of Rudolph the Red-Nosed Reindeer plays nightly (except Sundays) at 7:30 PM and 2 PM on Fridays and Saturdays (and December 21 and 22) through December 22 at the Hafen Theatre (1100 Tuacahn Drive, Ivins). Tickets are $24-66. For mor information, visit tuacahn.org/. 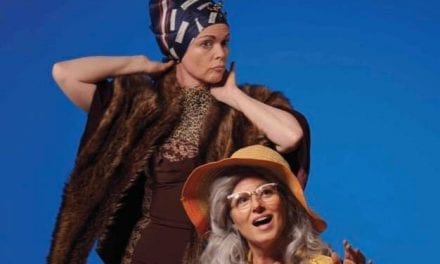