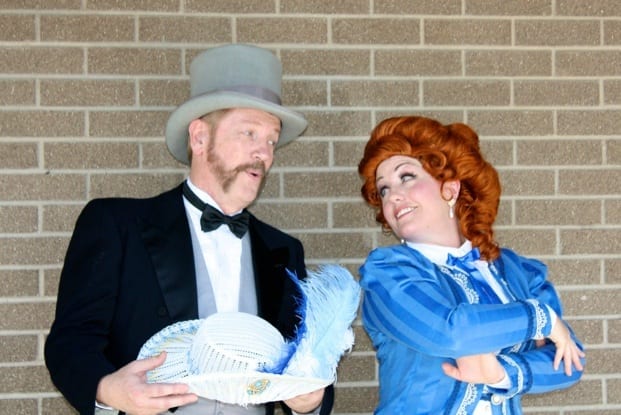 MURRAY — Hello, Dolly!, a classic from the golden age of musicals, is a feel-good musical with plenty of wit and charm. Written by Jerry Herman and Michael Stewart in the 1960’s, Hello, Dolly! was inducted into the Grammy Hall of Fame in 2002—six years before an adorable robot named Wall-E brought “Put on Your Sunday Clothes” into the repertoire of a new generation.  Following the story of widower Dolly Gallagher Levi (Sara McDonald)  in her pursuits to marry Yonkers’ half-a-millionaire Mr. Horace Vandergelder (Galen Chatterton), the show presents delightful characters in whose lives Dolly is eager to meddle.  Although things get a little sticky along the way, all’s well that ends well as Ermengard (Chelsa-McCall Lujan) and Ambrose (Tyler Hunt), Cornelius (Cameron Nichols) and widower Mrs. Molloy (Meagan Thorup), and Barnaby (Brandon Ngo) and Minnie (Rossanna Thrall) all find happiness together. But despite catchy tunes and sparkling costumes, this Murray Arts Council production under the direction of Douglas N. Bishop just doesn’t quite dazzle.  To quote the script, “It’s all in how you use it.”  This production had many of the right ingredients, but the unbalanced proportions inhibited the show’s success.

Ensemble singing throughout the show featured full and balanced harmonies, a credit to music director Susan Thompson.  Lacking, however, was energy to support the lyrics.  Throughout ensemble numbers, such as “Call on Dolly” and the title song, what should have been exuberant came across as aloof as the cast seemed bored with the numbers.  This may have been due in part to tempo of these songs seemed to be too slow.  It is unclear whether slower tempos were a decision made by Bishop or Thompson or whether they were set by the orchestra conductor Gary Jensen, but there were moments in “Put on Your Sunday Clothes” when Nichols pushed for a faster tempo but had to settle into the tempo of the orchestra.

The script offered many comedic moments for characters including Cornelius, Vandergelder, and Dolly.  While body language and vocal inflection supported the dry humor, the timing often felt forced.  Instead of laughing aloud at the dialogue, I found myself mentally appreciating the writing.  I wanted to laugh at McDonald’s business-card-for-everything bit, but rarely felt the motivation to do so.

One of the most impressive elements of the show was the costuming, designed by Laura Garner.  Dolly’s costumes were beautiful and flattered McDonald’s figure.  Each time McDonald entered the stage, I was excited to take in her latest dress and hat combination.  Most impressive was the sparkly red evening dress Dolly wore to the Harmonia Gardens.  In fact, this moment was the best executed of any moment in the show.  Waiters lined the amphitheater steps and the spotlight reflected off Dolly’s dress and jewelry as she sang the opening strains of the title song.  For the whole of her descent, I was captivated.  Unfortunately, the moment ended when the lights came up and the waiters joined in singing.  While I understood the decision to use a few strong female dancers as waiters in the scene, I was distracted by one loudly amplified female voice in the song.  Because the dancers were dressed as men, it did not feel appropriate to hear a female voice in the chorus.

The show was choreographed by Rowland Butler, whose choreography provided several of the best moments in the show.  It is difficult to describe the humor that built through “Elegance” as Hunt, Nichols, Thorup, and Thrall repeated a dance movement that was anything but elegant.  And a portion of the ensemble used as specialized dancers in “Put on Your Sunday Clothes,” “Before the Parade Passes By,” and in the finale earned the focus in each number.  Despite being staged behind the leading characters, I found myself watching their skilled movement whenever I got the chance. Another effective element was the use of a section of stage in front of the orchestra pit.  I loved the way this was used to give a feeling of distance traveled by the characters.  Although I heard gasps from the audience as several waiters completed cartwheels on this thin elevated strip, I enjoyed the exhibition of skill.  Much of the show actually took place on this front lip, allowing room for large rotating flats designed by Daniel Simmons on the main portion of the stage.  The set, while functional, appeared unfinished from many angles with unpainted wood and mismatched panels exposed.  I was disappointed in the simplicity of the parade float, which could have been an opportunity to create something extravagant.

Despite the production’s flaws, there were many talented vocalists on the stage.  Vocally, McDonald was everything I could have wanted in Dolly Levi, and Thorup’s “Ribbons Down My Back” was hauntingly beautiful.  However, I found my focus pulled from these performances by distracting details including makeup.  Many leading characters and ensemble members appeared with heavily rouged cheeks and thick eyeliner, visible from many rows back in the audience.  The effect was cartoon-like, especially on the men.  Both Thorup and Ngo were excessively made up, which counteracted the efforts each made to establish a realistic character.

The cast did many things well, but I was not captivated by the overall experience at this production of Hello, Dolly!  Although this production is unfortunately dull, those who attend to support a family member or friend in the cast will be likely to have an enjoyable experience.  For those who choose to attend, I would recommend entering from Murray Park’s southeast entrance.  Parking is available on the left, and you will find a well-marked trail to the theater.  Speaking from personal experience and the advice of other lost patrons, entrance from any other direction is difficult and confusing due to a lack of signage.

The Murray Arts Council’s production of Hello, Dolly! is playing at the Murray Park Amphitheater (parking at 493 East 5300 South) nightly (except Sunday) at 8 PM through August 1. Tickets are $10.  For more information visit www.murrayartscouncil.org. 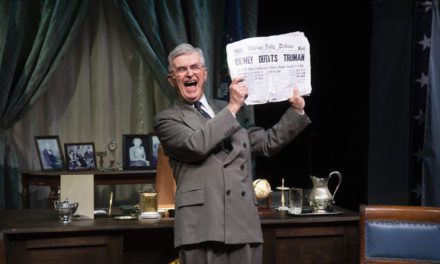 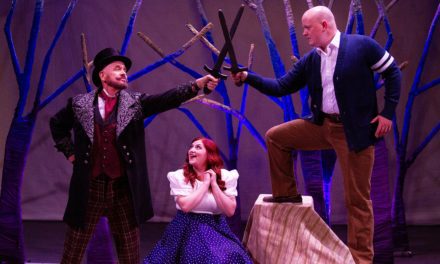