PROVO — Most of Shakespeare‘s comedies follow a formula: couples fall in love, love notes go astray, identities are mistaken, but in the end, they are all married and happy. Love’s Labor’s Lost is a bit of a departure from that. And at BYU, it is also a delightful departure. Traditionally, Love’s Labor’s Lost tells the story of four companions: the King of Navarre and his three noblemen (Biron, Longaville and Dumaine), who take an oath that for three years they will dedicate themselves to study, promising to give up the company of women for the term. However, the Princess of France and her companions (Rosaline, Katherine and Maria) have come to visit, but due to the oath cannot enter the court. The King and his party must then visit the ladies at their camp, where they instantly fall in love with them. There are a couple of subplots involving a Spanish swordsman, Don Armado, and Costard, a country bumpkin who have both fallen for Jaquenetta, a country girl, and Sir Nathaniel, a curate, and Holofernes, a schoolmaster, who give learned comment on the letters of the other characters. Episodes of mistaken identity ensue, the men disguise themselves as Muskovites (Russians), and the women switch tokens so that the men mistake them for each other, and when the men return as themselves, the prank is revealed. Shortly after, a messenger arrives with news that the Princess’s father has died, and the women tell their suitors to seek them in a year to see if this first flush of love is true or not.

In the current production of Love’s Labor’s Lost by BYU’s Department of Theatre and Media Arts, the setting is updated to Springtime 1944, during World War II. The action takes place in and around the AFO Canteen, somewhere in the United States. Biron is a member of the U.S. Army Air Force and the men with Biron become members of the Royal Air Force. The Princess and her group become the Canteen girls, Don Armado is transformed into an AFO Radio show host and band leader, Costard becomes a sailor. Sir Nathaniel and Holofernes become an Army chaplain and a WAC, respectively. I thought the setting worked wonderfully with the story. Director Stephanie Breinholt did a masterful job of creating this 1940’s world and updating the characters to fit into this setting; the use of 1940’s music was effective. Breinholt’s concept is a smart update and much more successful than Kenneth Branagh’s 2000 film version. (I can’t help but draw comparisons between the two. Both are set in relatively the same time period and use music to enhance the setting.) Branagh tried to make the music integral to the story and it was an interesting, but ultimately flawed choice. Where Breinholt’s version succeeds is in not making this into a musical, but allowing the music to set the mood and supplement the action.

Without fail, the costume design by Chelsey Roberts, Mary Jane Wadley, Desi Moss and Ashley Cook, along with Makeup Design by McKell Crandall and Rebecca Davis, is flawless. They truly captured the look of the 1940’s in every detail, from the pleats on the trousers to the perfect historically accurate hairstyles. The scenic design by Eric Fielding was extremely well done. The “Quonset hut” arches and period signage firmly set the time period and made for swift transitions between scenes. Lighting design by Michael G. Handley was also well done, with the exception of the very front of the stage, where actors often fell into each other’s shadows from the extreme side lighting.

The acting was uniformly superb. The four men (Chris Brand as Navarre, Sam Bostwick as Dumaine, Cameron Bench as Longaville and Dalton Skinner as Biron) played off each other wonderfully, with the scene where they spy on each other trying to compose love notes being one of the funniest scenes of the evening. Joshua Cooper as Dull, an MP, almost steals every scene he is in, even though he has very few lines. His facial expressions and body language are delightful to watch. Taylor Warburton as Maria was also great fun to watch. The slight quirks she imbued her character with gave depth to what could have been somewhat of a throwaway part. Tanner Garrett as Costard was also great fun because he displayed a real charm as the somewhat dim sailor who instigates much of the comedy. The accents that were employed were generally well-done, and especially Bench was exceptionally adept at his accent. (I would have sworn was British.) However, occasionally dialogue was lost in the accents.

The sound design by Doug Olson was mostly excellent. There were times when the band covered the dialogue, but that only happened occasionally. The one sound choice that didn’t seem to work was the switch between body mikes and the “radio” mike. The body mikes seemed to be piped through all the house speakers, while the “radio” mike seemed to be coming from two speakers down front, and often this meant that the sound was tinny and hard to understand. I understand the concept, but think that the “radio” mike would have been better remaining a prop only and not a functional one.

There were only two things that stood out to me as either poor choices or glaring errors in the show. In the original, Don Armado is a Spanish swordsman, and this update, he becomes a radio host. He is introduced with a prominent Spanish accent which we later find out is all an act. He’s an American GI who has this alter ego of Don Armado. Why this was done was never explained, and, as far as I could tell, really added nothing to the play. The other glaring problem was the presentation of two of the songs: “I Only Have Eyes for You” and “The Man I Love.” Both are wonderful songs and favorites of mine. However, (and I’m not sure if it was through conscious choice or unfortunate errors this night) they were not performed as well as I would have liked. In both cases it sounded like the director wanted the songs in a minor key, but not completely. Consequentially, the songs just sounded … “off,” for lack of a better term. The other music employed in the show was wonderful.

Love’s Labor’s Lost is a very enjoyable production in an updated setting. Get there early for the pre-show and if so inclined, during the intermission the audience is invited to “step apace upon the stage” to dance to some great Big Band standards. This is a most inviting version of a Shakespeare comedy.

Love’s Labor’s Lost plays Wednesdays through Saturdays (and Tuesday, March 20) at 7:30 PM and Saturdays at 2 PM through March 30 in the Pardoe Theater in the Harris Fine Arts Center on the campus of Brigham Young University. Tickets are $8-15. For more information, visit byuarts.com. 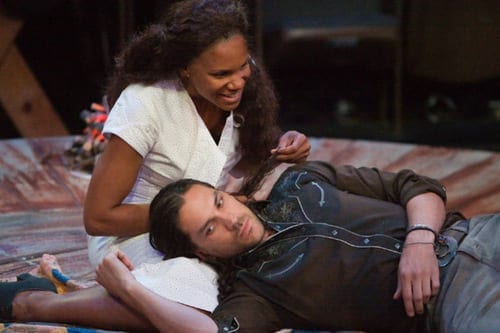 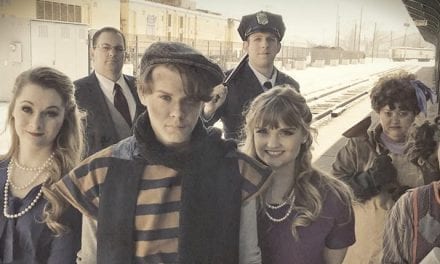