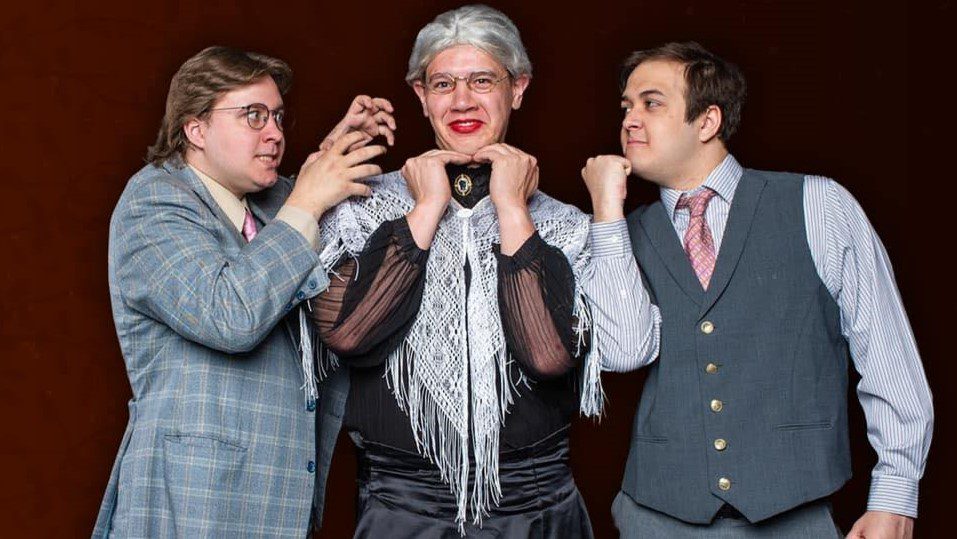 DRAPER — Be ready to be slammed by a wall of energy and laughter at The Off-Broadway Theatre’s production of Charlie’s Aunt.  The company’s mission is to “provide a place where people can come together and make laughter ring true and provide a safe place to hone skills and develop friendships.” This mission was obvious as soon as I entered into the familial, cozy atmosphere, especially before the show, when founder, actor, and writer Eric R. Jensen warmed up the crowd with a loving welcome and conducted a chorus of “Happy Birthday” to anyone celebrating anything in the audience. While the comedic, improvesque way of engaging the crowd slightly takes away from the theatrical illusion for audience members, it certainly creates an intimate environment that invites an evening of riotous laughter.

Oxford college students Jack and Charlie hatch a plan to propose to the targets of their affections. What better circumstance to propose marriage than during a lunch with the charming, wealthy widow from Brazil, Charlie’s Aunt? However, when the aunt’s arrival falls through at the last second, and their dear friend Fancourt Babberly emerges from the closet sporting some women’s clothing he is testing for a theatrical revue, everything falls into place. “Babs” will act as Charlie’s Aunt. What could go wrong? Written originally by Brandon Thomas and adapted by Eric R. Jensen, Charlie’s Aunt is a quick-moving, slapstick spectacle that is sure to entertain.

Director Jake Andersen encourages his actors to create characters with strong personalities and challenges them to be bold in their acting. This goal from the director is evident in every moment of the production. Each character is completely distinct in physicality. Jeff Driggs as Colonel Francis Chesney walks with a swaggering confidence and a steady jaw, while Dominique Morrison flounces and floats with light gestures and bubbly facial expressions. There were even a few moments when I was taken aback with joyful shock as actors committed so passionately to their performances, such as when Boston Smith erupted in aggressive, extreme laughter, or Austinn Le Jensen as Fancourt Babberly smacking his tongue across his face as he caresses the various ladies. I have never seen so many tasteful and subtle erection jokes in a show before, and it was completely hilarious.

Speaking of Austinn Le Jensen, this actor has to be one of the funniest people I’ve seen on the Utah stage. The moment he enters, he pulls attention to his hilarious expressions and grounded, squared stature. Austinn Le Jensen’s improv skills (as a part of the Laughing Stock Improv troupe,) are beautifully evident as he plays off of his scene partners perfectly, connecting to each of them. Every moment feels organic and natural with Austinn Le Jensen, his subtle reactions even more hilarious than his boisterous ones. I am thrilled to see what he brings to his next production on the Utah stage and throughout his career. This is an actor to keep track of, for sure. Austinn Le Jensen sells the show

Wigs by Tanya Walton and Stacee Hunsaker are surprisingly lovely for such a chaotic production; my favorite is the wig for Donna Lucia d’Alvadorex, a beautiful crimson wig that is delicately styled into an elaborate, pinned updo with curly sides. I even questioned if it was a wig until I saw the actress’ picture in the program! I also love the playful, corny but classy ambience music that plays before the show and during intermission. Sound design by Cameron Christensen sets the tone perfectly.

A few technical elements were a bit shaky, but I like to think it was because I saw this production on opening night. At various times microphones went out, and often actors are too loud for their mics. Some actors are harder to understand than others (most notably Eric R. Jensen as Albert Spettigue), but I believe that is due to his strong German accent that may be too thick and muddled at times. Projections by Jake Andersen are lovely overall, but did turn off at one point during the production, which I assume will be fixed in the future.

The biggest downside to the production is that the constant energy becomes exhausting by the second act. The slapstick bits become too overdone and the humor loses their magic. This is most notable with the hits on the back of the head with the serving tray, and the various hits to the groin. I did not love the constant slapping sound that was used for all physical hits, especially the hits to the groin. The sound does not make sense in that circumstance, and it feels redundant. As I finished act one, I was excited and impressed. When I finished act two, I was exhausted and overwhelmed.

Charlie’s Aunt has fantastic, nonstop energy that is, at times, a lot to take in. Those who are fans of slapstick would especially love this production, as well children who would eat up all of the contagious energy coming from the stage. Overall, my experience was a positive one. The distinct, thorough character work and bold acting performances are especially gratifying, and Austinn Le Jensen leads the show with fantastic skills as a brilliant comedic artist. The Off Broadway Theatre’s production of Charlie’s Aunt is a riot. 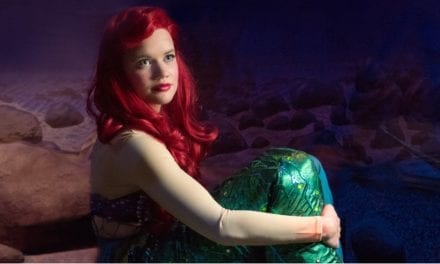