CEDAR CITY — Andrew Lloyd Webber and Tim Rice’s Evita is a shining star of musical theatre. A mere six years after the unbearable (and unbearably popular) Joseph and the Amazing Technicolor Dreamcoat, the pair knocked it out of the park with the 1978 hit, which features unforgettable music and interesting characters and is playing now at the Simon Fest in Cedar City.

The main character is Eva Peron, who was the first lady of Argentina from 1946-1592 and is that country’s primary cultural icon to this day (along with Diego Maradona). While her husband Juan Peron is still politically popular in Argentina (the ruling political party has been named for him ever since), he is best known today as the world’s greatest harborer of post-WWII Nazis, including such evildoers as Adolf Eichmann and Josef Mengele, a fact that did not make it into the musical.

Several other elements of the plot are fictionalized as well. For example, in real life tango singer Augustin Magaldi never toured Eva Duarte’s town, let alone slept with her as a 15-year old and whisked her away to the big city. Eva’s family asserts to this day that her mother took her to Buenos Aires to become an actress. And while some historians argue she did go to B.A. with a lover, it was someone her age, not a middle-aged predator.

Heather Oram slayed the singing parts of Eva Peron. Her range and control were astounding. She may have room to grow a bit in expression, but technically speaking, she was off the charts. John Grzesiak was similarly strong as her lover-turned-husband, Juan Peron. My theater companion of the evening did not like the apparent age difference between Oram and Grzesiak. It was little cringey and I must admit, my stomach turned a little when they kissed, but it only illustrated reality: Eva was 25 when she met the 45-year old Peron. That’s the real cringe, and it is telling that Simon Fest could reproduce that on stage.

Evita sports a interesting, complicated narrator, Che Guevera (played by Tyson Chanticleer). The real life Che was an Argentine contemporary of Eva Peron. In the musical, he fictionally and cynically questions her actions, lamenting her extravagant lifestyle and how little her social policies are actually helping the common man. In response, she banishes him to rabble rouse in Cuba. Chanticleer gave a fetching performance, complete with beard and shaggy locks. He was often the most committed actor and dancer on the stage.

As Magaldi, Christopher Whiteside demonstrated an impressive voice; his singing was one of the high points of the production. As a man in the row behind me said when Whiteside started singing, “This is good.” Likewise, Tamera Merkley as Peron’s mistress has a lovely voice herself for her one-off number “Another Suitcase in Another Hall.” One thing that stuck out to me in this production was what a strange song that is. Why does this anonymous mistress with a walk-on-and-off part get verse after verse to share her plight? I suspect Webber wrote the song, which is absolutely gorgeous, and had to find a place for it. And it does make for a moving reprise during Eva’s death.

Merkley’s choreography was most successful in full-cast numbers toward the end of the show like “A New Argentina.” But it was harder to connect with smaller movements in “Buenos Aires.” I kept wondering why the actors were saucily lowering their hands during the “big apple” line. Was the “apple” falling à la Newton? Or a metaphor for Eva partaking of the forbidden fruit of teenage sex with older men? Whatever the intention, there were movements like that which did not connect for me.

Director Clarence Gilyard’s best staging was Argentina’s women encircling Evita near the beginning of the show, idolizing her and imparting their esteem in almost a religious fashion — which makes sense since she was known as the “savior” and “spiritual leader” of Argentina, despite her not being a particularly religious figure. A couple other numbers could have benefited from reimagined direction. “I’d Be Surprisingly Good for You” featured Eva and Peron boringly walking arm-in-arm through what felt like the entire number. And while the dry rocking chair military coup number “The Art of the Possible” was seriously dull. Plus, what was with those rocking chairs anyway? Those things do not convey ambitious military leaders; they convey crotchety old men!

In general, this production of Evita could have greatly benefited from a cast three times the size. The massive stage of the Heritage Center Theater was simply too large. Everything from group scenes to choreography would have been improved by having more actors onstage.

Technically speaking, sound designer Douglas Hill’s microphones were solid, except tragically for the big song of the night “Don’t Cry for Me Argentina,” where they popped throughout. It is a shame when one mishap can throw off what was otherwise a technically sound show. As there were no set changes and only a handful or props, the production felt more like a review than a stage musical at times. However, they did wheel an impressive coffin onstage—kudos to whomever provided it.

My first experience at Simon Fest, like Peron’s life, contained beauty and disappointment. Evita contained musical highlights, but other aspects left me wanting. Given Simon Fest’s reputation of theatrical excellence, including UTBA’s recent reviews of Man of La Mancha and Almost, Maine, I hope to experience more satisfying shows there in the future.

The SimonFest production of Evita plays various dates at 2 PM or 7 PM through July 30 at the Heritage Theatre (105 North 100 East, Cedar City). Tickets are $18-30. For more information, visit simonfest.org. The production also plays at the Egyptian Theatre (328 Main Street, Park City) August 11 through 13 at 8 PM and August 14 at 6 PM. For more information, visit parkcityshows.com. 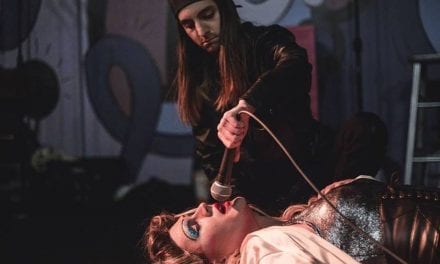 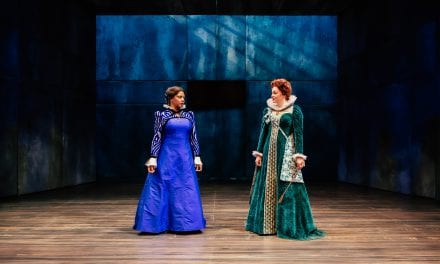