PROVO — As You Like It is the BYU Young Company’s latest touring show, and it is an odd production for the company. Not because of any artistic choices that can make Shakespeare shows falter, but because the show is a hit with the wrong audience. The adults watching opening night were having a ball, but the kids were bored. As You Like It is a strange show because it misses the target for kids, but is a bullseye for adults.

Director Tony Gunn brings flair to the play, most noticeably by adding pop songs (“My Dude,” “When Doves Cry,” and “Raspberry Beret”) that matched the characters’ dilemmas and moods. Like any good modern Shakespeare director, Gunn also adds plenty of stage business for his actors to do, often with comic results. The action is enjoyable to watch, and Gunn creates visually appealing images (such as when Orlando throws his love poems in the air, allowing them to drift towards the floor and scatter on the stage) throughout the play.

Gunn also succeeded better than most directors in scenes where Rosalind remains in disguise. There is no logical reason in the script for why Rosalind stays disguised as the boy Ganymede after she meets with Orlando in the Forest of Arden. Most directors fail to solve this problem, but in this production, it seemed like Rosalind wanted to be sure of Orlando’s love for her before continuing their relationship. It still is not realistic, but it does plausibly allow the play’s action to continue. 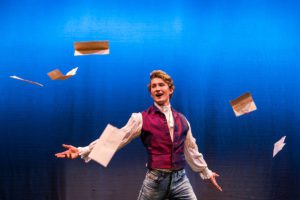 The problem is that much of this skillful direction did not appeal to children. My 7-year-old son—who has experience watching Shakespeare productions and has been brainwashed since birth to enjoy Shakespeare—often commented that he did not understand what was happening or that he was bored.  The other children sitting near me also displayed signs of boredom: playing with their programs, fidgeting restlessly in their seats, etc. And children rarely laughed at the jokes, though the adults often did.

The only allowances for the children in the audience were brief explanations of the action (provided by Emma Larsen) and an exaggerated acting style. That just was not enough. 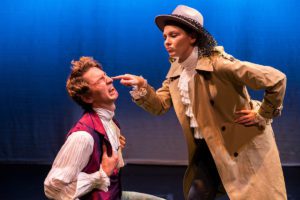 The acting was good, though. Parley Lambert was a dashing Orlando, and Lambert memorably conveys the mannerisms of a lovesick young man. He also has an easy command of the stage, and his energy sold the scenes in which he had exaggerated acting. Lambert will have no trouble working in large auditoriums when the show tours. Eden Allen is a charming Rosalind, and she has real chemistry with Lambert and with Alexa Sandberg in the role of Celia. Allen is positively bubbly and giddy when Rosalind describes her love for Orlando, and her scenes with Sandberg often feel like girl talk between real friends.

What I enjoyed most about the performances, though, was the language. Almost every actor has at least one moment where any modern speech tendencies disappear and they get swept up in the language of the Bard. There is no trepidation in the cast’s speech, no uncertainty of meaning. These seven actors all embody Shakespeare’s words so naturally that the centuries between the playwright and the audience melt away.

Costume designer Callie McDonough dressed the actors in costumes that were half Renaissance and half modern. Frilly sleeves and cravats mixed with jeans, a trenchcoat, and other modern articles of clothing to create a timeless aesthetic. Orlando’s modern skinny jeans recalled the tights of Shakespeare’s era (especially when smartly paired with a Renaissance shirt and maroon doublet) and created an eye-catching silhouette. Set designer Travis Coyne created four pieces resembling an impressionistic painting to represent the Forest of Arden, giving the show a splash of color and etherealness. The reveal for the forest pieces was fun to see, too.

Just like Rosalind in the Forest of Arden, BYU Young Company’s As You Like It is disguised as something that it’s not. As You Like It may be marketed as a theatre production for children, but it is really for adults. Yes, parents should see the show, but they get a babysitter and leave the kids at home so they can enjoy it by themselves.

The BYU Young Company production of As You Like It plays Wednesdays through Fridays at 7 PM and Saturdays at 2 PM and 4 PM in the Nelke Theatre in the Harris Fine Arts Center on the campus of Brigham Young University. Tickets are $7. For more information, visit arts.byu.edu.