KAYSVILLE — Sister Act, based on the 1992 movie of the same name, opened on Broadway in 2011 after previously having been in London. Various productions have been seen all over the world, and Hopebox theatre in Kaysville is the latest theatre in the Utah area to mount this show. 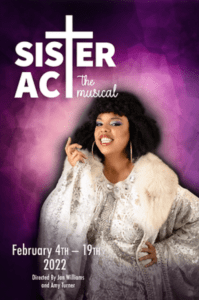 The script (by Cheri Steinkellner and Bill Steinkellner) follows Deloris Van Cartier (played by Brandy Pehrson) a budding lounge singer who witnesses her boyfriend (played by Spencer Bawden), shoot a man. Deloris runs to the police, where an officer who is also an old school mate (played by Dallin Richards) says she has to hide in a place where Curtis will never find her: a convent. Of course, Deloris does not fit in a convent, and this is where the story that is well known blossoms and all the action and music take place.

Directors Amy Turner and Jan Williams understanding that Sister Act is best when it chooses to focus much of its attention on the fun of singing and dancing nuns. Anna Peacock is a standout as the young novice Mary Robert, who opens up her voice and her heart and becomes more brave during the end of the show. Also, Sara Shaw is spectacular as the spunky yet over-the-top Sister Mary Patrick.

A true surprise though was Dallin Richards as “sweaty Eddie,” the police officer. It is really fun to watch Eddie be played by an underdog who turns out to be a star. Unassuming at first, the moment Richards opened his mouth to sing “I Could Be That Guy,” much of the audience was cheering and hollering for him. In the end, the audience cheered for him louder than for any other actor in the entire show. 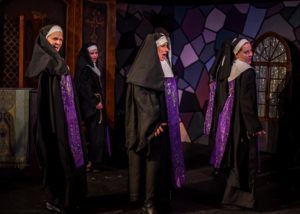 I also want to make a point about the costume design by Williams. Honestly, I was not expecting much. After all, what can you really do with a habit? Turns out, you can do a lot with a habit. The end of Act One featured embellishments that made me jealous because it combined my favorite colors in a fantastic way. Having played a mother superior in a different nun musical, the costumes in the finale made me wish I had a sequin-studded habit. Additionally, the costumes that Deloris had in the beginning and the costumes for the rest of the cast had a fun 1970s flare. The set design, also by Turner and Williams, was also fun and helped bring the ambiance to the show, thanks to the wonderful color choices.

There were four choreographers credited: Amy Turner, Andra Thorne, Candice Dallin, and Jan Williams. I enjoyed the choreography, especially on the big productions numbers, “Take Me to Heaven” and the finale of act two. The best parts of the entire show were when the cast was working together, showing a well-meshed group of actors who had great cohesion.

The problem with this production was the pacing and some of the individual musical numbers in the score (with music by Alan Menken and lyrics by Glenn Slater). Individual songs seemed to drag and did not feel as interesting or captivating as when the full group were together. Pehrson played a believable Deloris, but I enjoyed her so much more when she was coaching or encouraging the other sisters than when she was singing about her own hopes and dreams. Her opening number, “Take Me to Heaven,” at the nightclub, was fine, but the energy of “Raise Your Voice” as she encouraged the other sisters, and their energy as they responded, was so much better it was almost like I was watching a different actress emerge. That could have been character development. It could have been better energy. Or it could just be different choices that made for a rather bumpy production with some really beautiful highs but some significant lows in between.

Mother Superior (played by Sal Duncan) was stoic, and her voice was very lovely. But she was almost too stoic. So much so that her change of heart at the end was almost unbelievable. I know that she has a change of heart regarding Deloris, but the mother superior’s motives do not seem quite clear.

Overall, the action and production in Sister Act are lovely, and the cast of nuns are delightful. Everyone loves to see singing and dancing nuns. As with many amateur productions, the pacing will likely improve and the costumes will continue to sparkle.