SALT LAKE CITY — Created by Graham Brown and company, The Chocolatier is “an immersive, dance-theatre experience” set in a yoga studio where a shared environment is created with the performers and audience members. As an immersive production, “the show exists in multiple rooms, with characters moving throughout, and multiple scenes happening simultaneously.” While I love this concept and was also highly impressed when I reviewed Thank You, Theobromine in 2019 (now rebranded as The Chocolatier), this production fell flat. While there are some changes, The Chocolatier largely has the same framework. But a new cast, a new setting and a new time make for a different experience. 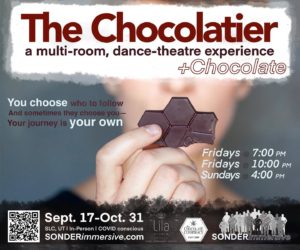 Upon arriving at Lila Studio, I was prompted to choose a group that corresponds to a character. While there is not a traditional plot, the story loosely follows a family that had a dream to make chocolate. Over the years, they have become competitive with each other, and their relationships complicated. At the start, I was taken group by group to a separate entrance, which piqued my interest, adding to the mysterious nature of the production. After an introduction, I was guided alone to a large room with two actors where I helped them build a sculpture of sorts with clothes hangers. After this promising start, I was excited to move throughout the space and gather more story and emotion from the characters.

Typically, with immersive experiences like these, audience members are privy to engage with the action at their desired comfort level; however, active involvement often leads to a more full and potentially transformative experience. While it is recommended to get up close, follow the action and focus your attention, I actually found it to be absolutely necessary in order to follow the character’s story lines at all. Actors were often soft spoken, and the chaotic nature of the piece made it hard to comprehend. I appreciated the tension that was created, but before too long it felt messy, without control or purpose. At times, I also doubted the preparedness of the cast, feeling unsure that what I was seeing or hearing was scripted, improvised, or mistakes. The energy was hard to maintain, and it felt like several scenes dragged on for too long.

Additionally, the mood and atmosphere of the piece left much to be desired. The interactive element sets a tone that the performance will be more mystical, but the inherent dreamlike environment that a show like this elicits was lacking. While some moments of the show were intriguing and set a desire for further exploration of the characters, I wasn’t ever fully captivated. While the introduction warns the audience that they may get lost, I found myself not lost, but simply bored. Themes of love, loss, power and obsession could have been emphasized more strongly. Where the show did excel was with the beautiful and evocative choreography, also by Brown. Context and feelings were much more effectively communicated through dance and movement than from the acting or dialogue.

I wish the production had come together stronger for me, but The Chocolatier does provide a unique experience for every participant, a magical element of immersive theatre. This element is where the show displays its biggest potential, providing a journey that is yours and yours alone. It was fun when the actors engaged with me personally, though I wished for more and often the interactions felt forced and unnatural. I felt the audience could have been better involved overall, and the piece needed more intimacy to be successful. I found myself getting caught up in tender moments at times, but ultimately the lack of connection kept strong emotions from being elicited. Because I wanted more, I kept engaging and exploring, but I was left wanting.

Re-visiting my review of Thank You, Theobromine, I realize how this production did not touch me like before. Details and mystique were lost, and most elements were not as strong. Some of the missing allure was due to necessary changes that were made to accommodate safety precautions for COVID-19. While I appreciate SONDERimmersive’s ability to provide live theatre right now, perhaps the missing elements were necessary for the impact and profundity that I was hoping for. While I attempted to go into The Chocolatier unbiased, in the end I can’t help but compare it to my previous viewing experience, and the result is underwhelming.