SALT LAKE CITY — One of the many thoughts that popped in my head during Bonneville Theatre Company’s production of The Well-Spoken at Great Salt Lake Fringe Festival was, “If you’re not doing academic theater, or already well-known for producing Shakespeare, why would anyone still choose to put on Shakespeare?” I like the Bard as much as any other theater professional, but if you’re putting on a show to tell your audience a message you find important, there is a strong chance a modern playwright could get the same message across in a much more relevant way. 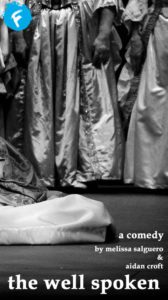 The Well-Spoken, a comedy by Melissa Salguero and Aidan Croft, peeks into the world of two artistic directors, Rob and Angie, as they struggle to figure out whether their “diverse,” “Chekov-inspired,” and fully gender-bent production of Richard III is acceptable or relevant. For any theater people in the audience, which is most everyone at the Fringe festival, everything in the play is something very much taken from real life. For example, director Rob (played by Allison Billmeyer), who wears an “Any Functioning Adult 2020” shirt, a blazer, and hiking sandals with socks, which are promptly taken off to do yoga in the office. There is also leading actress Angie (played by Lexie Thomson), who is so excited to play Richard III but cannot comprehend why casting herself as the evil and disabled king and calling it “diversity” is raising red flags for the cast’s audience and friends.

I loved The Well-Spoken. It was hilarious and relatable, and the actors embodied the real-life tropes of their characters so well. All in all, it brought up a hot topic in theater right now: if you want your play to be inclusive, choose an inclusive play, rather than taking a classic and forcing it into “all the inclusivity boxes.”

The Bonneville Theatre Company production of The Well-Spoken was part of the 2021 Great Salt Lake Fringe Festival, which closed on August 7. For more information, visit greatsaltlakefringe.org. 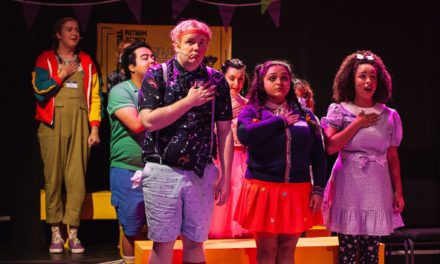