THE CONSCIOUSNESS writing and acting impresses

SALT LAKE CITY — The Consciousness, written by Bethany Dickens Assaf and directed by Charis Watler, is a dystopian look at a composer, Reece, played by Manuel Solis-Bauza, who looks to a dead composer, Theo, played by Casey Casteel, for inspiration. However, what Reece does is get a lot more than just inspiration, and his choices lean on unethical.  Meanwhile, he is also trying to build a relationship with a young clarinet player, Erie, played by Katie Thayer, who is very skeptical of dating any composers. 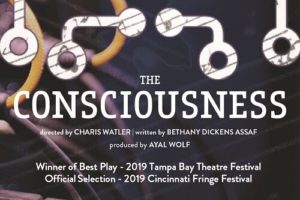 Another character, Ellis, played by Arius West, becomes involved in the plot when Reece learns of a relationship that Ellis had with Theo while alive. Solis-Bauza as Reece weaves the tale through each of these characters as Reece tries to compose the symphony that will be his senior project and will be the pinnacle of all that he has worked for in his schooling.

The characters had surprising chemistry for a virtual environment. Solis-Bauza portrayed a great deal of stress and overwhelmed energy, and as someone who has lived the life of a perpetual student, I could empathize with the stress and overwhelming situations.

Throughout the confusion, there are twists and turns regarding relationships, emotions, and who can have what attributed to who. The emotion between West and Casteel is fantastic, and I really enjoyed watching some of the scenes that exposed their character’s relationship. Thayer’s and Solis-Bauza’s characters also had a good amount of flirty chemistry and fun moments, especially the scene in the library. One of the best parts of the show was the interaction between West’s and Solis-Bauza’s characters as some of the major plot points unfolded and as Reece gets deeper and deeper into his mistakes within his compositions that are not his own. The strength of the emotions that are at play are impressive both with writing and acting.

The writing at the end by Dickens-Assaf was intriguing and a little mind bending. I am still trying to understand what it means and what the writer was trying to say with the story. The filming work was quite good for a virtual broadcast, and while the lighting and filming was not credited, I was quite impressed with how well I could see the actors and how much it felt like a live production. Many of the other virtual productions I have seen since the start of the pandemic have struggled to balance the lighting for stage with the filming, and they do not have the sufficient equipment or skill set to provide the right experience for the audiences. The Consciousness has played at other Fringe Festivals and won other awards at other festivals, and it is not hard to see why. These festivals had the benefit of seeing The Consciousness in a live experience, which I think would have improved the production, but for a virtual production, it was high quality and highly recommended.

Nique Content’s production of The Consciousness plays online on demand as part of the Great Salt Lake Fringe Festival. Tickets are $10. For more information, please visit their Fringe Festival webpage.