ST. GEORGE — If one didn’t know better, one might think the illustrious Rodgers’ and Hammerstein had a crystal ball when they wrote the underlying themes of the classic musical South Pacific. 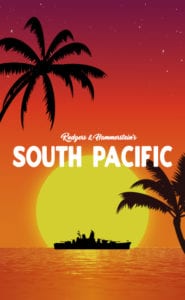 Although the backdrop of the worldwide upheaval has changed from World War II to a litany of isolated and interlocking social skirmishes, political squabbles, and civil unrest, the need for tolerance remains. In fact, one might say the need is greater than ever on all sides of each complex issue.

That message, along with an emotional feeling of pride in the sacrifices made by America’s military men and women, comes across loud and clear in St. George Musical Theater’s South Pacific.

As usual, it seems anything Norm Lister touches turns to musical gold, and that is certainly the case with his most recent directorial project, not the least of which is the impeccable casting.

After seeing so many St. George Musical Theater shows featuring absolutely incredible talent, I know that audiences need not be surprised that this group of amateurs—many of who could easily be professionals—surpasses the standard normally imposed by the distinction of community theater.

Aside from a few accents that were hit and miss, the caliber of talent from each of the leads and throughout the ensemble showed a devotion to their craft and an enthusiasm that cannot be overstated.

Take Rachel Cox and Rob Simmons in the pinnacle roles of Nellie Forbush and Emile de Becque for starters.

No stranger to SGMT audiences, Cox embodies the endearing nature of, “Knucklehead Nellie,” from the moment she walks on stage. Her youthful optimism and genuine ease with the role allows the audience to completely fall in love with her and with the love story at the heart of this play.

Cox’s vocal prowess is matched only by that of her counterpart, the Frenchman Emile de Becque (Simmons), whose rich baritone lives up to even the highest expectation for the well known sweeping love songs, “Some Enchanted Evening,” and, “This Nearly Was Mine.”

Clearly, Simmons’s voice is used to filling a space far larger than the St. George Opera House. Or it could, should he ever feel so inclined.

Though not involved in either of the two main love stories in the show, Luther Billis (played by Caleb Christensen) steals the heart of the audience with a little something called humor.

Backed by an incredibly talented and enthusiastic group of Seabees, Billis bursts on stage with the fabulous, “There is Nothing Like a Dame,” and it only gets better from there.

For anyone familiar with the 1958 film version of South Pacific, all the iconic moments are included in this stage version—including Stew Pot’s booming bass contribution to, “Nothing Like a Dame,” and even Luther Billis’s rolling ship tattoo during, “Honey Bun.”

Not everyone can master that kind of stomach movement.

Joining Luther Billis in the category of funny and lovable, Bloody Mary (Mele Morgan) presented a polished, well-spoken version of the meddling mother who loves to shoot the breeze with the Seabees and who can’t wait to introduce her daughter to the newest arrival on the island—Lt. Joe Cable.

Once again, the careful casting for this production enhanced every scene, particularly the inclusion of a skilled Polynesian dancer as Liat (Aleina Lister) and the young and rugged Lt. Joe Cable (Andrew Evans). The duo’s chemistry was 100 percent believable, making the ending even more emotional.

Other highlights in the show included a stellar performance turned in by John Grzesiak as Captain Brackett. Grzesiak as Captain Brackett’s interchange with Lt. Cable about the benefits of dating an older man, and his brusque-but-humorous way of dealing with Luther Billis, made him a force to be reckoned with—and a favorite character at the same time.

The scenery, although minimal in St. George Musical Theater’s traditional theater-in-the-round style, is to be commended, along with the costume design. The only confusing pieces were the inclusion of a Catholic nun and several children dressed in some sort of Von-Trapp-children-meets-Catholic-school-girl apparel that seemed to serve no real purpose.

In what feels like a departure for SGMT, tickets to this show are general admission rather than assigned seating. This decision means audience members are forced to arrive significantly earlier than usual to secure a favored seat. In triple digit heat, waiting in line outside prior to the show has the potential to put a sweaty damper on things.

Regardless, the power and passion of South Pacific and all the lessons, “You’ve Got To Be Carefully Taught,” make it all worth it.