CENTERVILLE — There are a few shows that I know so well that I hesitate to review them. The Secret Garden, with script and lyrics by Marsha Norman and music by Lucy Simon, is one of those shows. It premiered on Broadway in 1991, and a young Maren got the cast album right away, and found herself entranced by the music and story just as she had been by the novel by Frances Hodgson Burnett a few years previously.  So it was with slight hesitancy that I approached this performance at CenterPoint Legacy Theatre, directed by Jansen Davis. Could the production live up to my well thought out version in my head and the fantastic professional productions that I have seen?

CenterPoint has decided to mount the Spring Version of The Secret Garden, which is a shortened version from the original production. This version plays without an intermission and has several songs removed. This is in accordance with CenterPoint’s wise decision to mount shorter productions during the COVID-19 pandemic. COVID-19’s impacts are elsewhere on this production. There was not much set to speak of, and much of the scenic design by Truxton Moulton was limited to projections and simple pieces, which keept the focus on the players. The players all wore face shields for safety, which I barely noticed after the first few minutes. There was some extra spacing within the staging, which again was not noticeable.

The cuts to the script and score are hit and miss, though. Making the show shorter and more concise showcased the younger characters Mary (played fantastically by Caroline Drake) and Colin (played by Colin Burke), whose interactions were fun to watch, both when they were fighting and when they were getting along as cousins who became the best of friends. When matched with the maid Martha (played by Jessica Wadley) and her younger brother Dickon (played by Alex Young), this quartet was a tour de force. There is a moment in the show where they sing about a charm in the garden to heal ailments for young Colin. The song, “Come Spirit Come Charm,” had amazing harmonies guided by music director Arianne Hellewell, and joyous choreography that was not credited in the program. 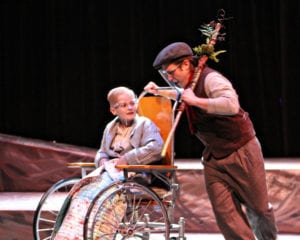 Colin Burke as Colin Craven and Alex Young as Dickon.

Another musical triumph was “Wick,” which covers the awakening of a Garden, and in a dark January. During that song, Young’s golden voice was able to reach in and awaken my soul. Moreover, his ability to also work well with the Yorkshire accent was stunning. This was also true of Wadley as Martha and Brent Sloan as the gardener Ben. Wadley sings one of the most iconic songs of the show, “Hold On,” and I was reduced to tears as she guided Mary to understand that she can get through this challenging time.

Where this shortened version was a hindrance to the story was with the character of Dr. Craven (played by Russ Maxfield), who is left hollow. Some of the turns that the character makes leave him seem quite cruel without much motivation to be seen on stage. An audience member unfamiliar with Dr. Craven’s back story would feel confused about why he behaves the way he does. Maxfield did a fine job with the character; his voice strong and his motivations of the character clear enough with the material given him, though. In addition, Zach Watts as Archibald Craven (the father of Colin and uncle to Mary), while also having a strong voice, played the lonely widower well. But the character’s concerns about passing his health challenges to his son were not apparent. It is alluded that his son may inherit his hunched back, but Watts did not walk with a hunchback or appear at all to be unhealthy.

The best praise I can give is that Laura Strong played the role of Lily (Colin’s mother, who died in childbirth) exquisitely. Near the end of the show Lily appears to Archibald and sings a heart wrenching song called “How Could I Know,” where she talks to him about not knowing she would have to leave this world too soon and encouraging Colin to come to her garden to live a long life. The performer who created the role, Rebecca Luker, recently passed away of ALS. I had the honor of meeting Ms. Luker a few years back, and I was concerned about having to hear this song again so soon after her passing. Strong’s rendition left me in tears for the song’s message and for feelings of loss that I and others have experienced this past year.

The message of The Secret Garden is hope, which was lacking in 2020, especially in the theatre community. Thank you, CenterPoint and Jansen Davis, for bringing in some hope to the opening of the Utah 2021 season.