OGDEN — Caroline, or Change is a moving musical that was first produced on Broadway in 2004.  Written by Tony Kushner with music by Jeanine Tesori, the plot follows the story of Caroline, an African American maid in 1963 (played by Dee-Dee Darby-Duffin), as she struggles with the life that she has, the children she needs to care for, and the challenges that she faces while working for a white middle class family in Louisiana. Caroline, or Change is a sung-through musical with very little dialogue, and the current production by the Good Company Theatre in Ogden, directed by Teresa Sanderson, is not only the best thing I have seen produced by the Good Company Theatre, it may be the best thing I have seen on the Utah local stages this year.

Hidden away off of historic 25th street in Ogden, the Good Company Theatre has developed a performing space in an old store building.  If it were not for the signs put out by the company directing patrons where to park, it would be easy to miss this space. Inside is an intimate theatre in the round with general seating.  As a critic, I decided a while ago that when in general seating I would try and pick the worst seat in the house. I do this because theatre should be accessible, and if a show does not cater to its worst seat, then it may not be serving the full audience. Good Company’s space has an immovable pillar in the middle of the stage. I sat in front of that pillar, and yet Sanderson’s innovative staging meant that my view was no more encumbered than for any other seat in the house. 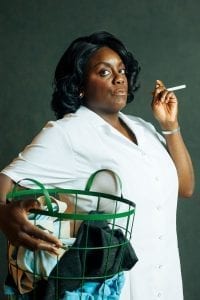 Because the production is sung through, the music is a vital element of the story telling.  The live musicians at the hand of music director Anne Puzey were impeccable. While a small ensemble of two pianos and a few reed instruments played by one musician (Cheryl Backley), the live music built an automatic connection to the audience.  One of the characters, Stuart Gellman (played by Aaron Ross), was a clarinet player in the story, and the live clarinet in the pit added an element that could not have been replicated by audio recording. Additionally, the memory of a loved one passed on who played bassoon was represented so well by the melancholy notes of that instrument. Backley managed all the reed instruments with elegant class and flair.

I was privileged to see this show years ago when it was first on Broadway, and I remember watching Anika Noni Rose play Caroline’s daughter, Emmie, and thinking to myself that a star was being born before my eyes.  I had a similar reaction with Daisy Allred as she filled the shoes of the young dreamer who looks to Martin Luther King and others as the light to a better future for herself and her mother. I enjoyed how Allred interacted with two of the youngest characters, Jakie (played by Mikaya Wilson) and Jo (played by Aiden-Isaiah Oliver).  As a mother of two children and four stepchildren, I know that the chemistry needed to portray a protective yet sometimes annoyed older sister is not something that comes easily, but Allred, Wilson, and Oliver seemed to be intimate siblings in each scene they were involved in. 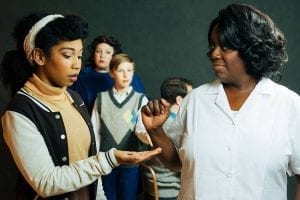 The clever and deep writing in this show has several appliances represented by actors, and the washing machine (played by Kortney King-Lives), the radio (played by the trio Detorea Holy, Olivia Lusk, and Sibley Snowden), and a dryer (played by Tristan B. Johnson), added so much to this production.  Giving life to the difficulties of the situation that Caroline, a divorced woman who cannot do much more than housekeeping, the appliances breathe into the struggle more of the feelings that Caroline works to express.

Duffin as Caroline gives a performance that I cannot rave enough about.  When I was a 24-year-old in Manhattan, I may not have fully understood the impact of this story when Caroline, or Change premiered, but as a 39-year-old woman (the same age as Caroline in the show), I was impressed at how well Duffin could connect with me and help me understand Caroline’s tired feelings as she sings about wishing the night could last longer and so that she would not have to wake up and go to work. Additionally, Duffin rose to the challenge of singing the vocally difficult role with such beauty and raw emotion that I was openly weeping throughout the production.  There are so many scenes I could mention between Caroline and her daughter, or her friend Dotty (played by the fantastic Alicia Washington), or her employer’s son Noah (played by Oliver Kokai-Means), but I am not sure the limited words I have in this review could convey the power of these interactions.

The story of Caroline, or Change is very timely, and it is brave and wise of the Good Company Theatre to choose this production. Strong themes of racism, anti-Semitism, class differences, privilege, and abuse run through the show. While not for the faint of heart, is an important piece of work, and every cast and production team member deserves applause for the way they have brought this story to life. A review cannot do justice to the feeling of being in the audience for this show.

Caroline or Change  plays at Good Company Theatre (2404 Wall Avenue, Ogden) Thursdays through Saturdays at 8 PM, Saturdays at 2 PM, and Sundays at 4 PM through December 9. Tickets are $20. For more information, visit www.goodcotheatre.com.