DRAPER — The Addams Family is a side tickling adaptation of the old comic strip and TV show with book by Marshall Brickman and Rick Elice and music and lyrics by Andrew Lippa. This tale of a strange, if not endearing family who has a penchant for the dark and scary things of the world has a chuckle in it for everybody. The group of actors and performers led by director Eldon B. Randall at Draper Historic Theatre put on a quaint production, with several fun moments. 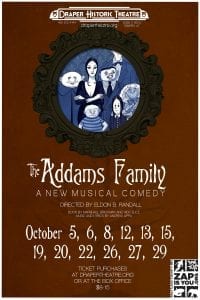 The story involves young Wednesday Addams (played by McKay Dee-Jo McDonald) slipping from her darker lifestyle a bit to find herself falling in love with a normal boy, Lucas Beineke (played by Matt Williamson). Wednesday wonders if she will lose herself forever in this crazy thing called love. As the young lovers bring the families together for the first time, they—rightfully worry about the repercussions. The ensuing chaos makes for a fun night.

This show is well known through the theatre community as one filled with many types of humor, and producers hope that it has a little something for everyone. The jokes lining the script were well played for the most part and did elicit a good response from the audience. At several moments however, it felt that the focus was pulled from telling the story as a group of actors on stage, and transitioned instead into a group of comedians filling space between jokes delivered for audience approval. This feeling drew away from any storytelling element and made it difficult to continually follow with the story of the production.

From the beginning, the overall sound was quiet. A choice was made to omit the use of microphones in the small space, giving a more personal feel to the productions, but the lack of amplification unfortunately hindered the production value overall. Without the help of a microphone, most of the actors in stage could not fill the auditorium as desired, and in turn the music had to be adjusted to fit the lower volume. This caused several mishaps in music timing throughout, as it seems the actors were then struggling to hear the music, and missing cues and entrances. Several issues throughout the production could have easily been resolved with the addition of microphones to the actors.

While the story primarily revolves around Wednesday and Lucas, the main continuing force in the show is her father, Gomez. In this role, Tony Baca put intense focus on the humor in the role, and developed this side of the character very well. His narration and protagonist role drove the story and added an entertaining element. He was an unfortunate victim of the sound problems mentioned earlier, missing a couple entrances in his struggle to hear. 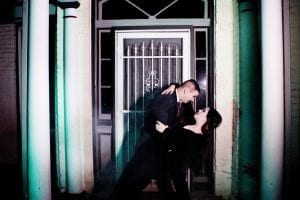 Tony Baca as Gomez and Aubree Langford as Morticia.

In the roles of Lucas and Wednesday, McDonald and Williamson were each talented in their own respects, but failed to coalesce as a pair on stage. The scenes involving only the young lovers felt strained in their chemistry and could have used some help with relationship development.

Still, this show was not without its highlights and good moments. The role of Uncle Fester was played by Jared Daley, who did a stellar job of bringing the quirkiness of the crazy uncle to life. His humor and sincerity were both convincing, and his voice was pleasantly ‘Fester’-esque. Another standout performance was that of Thomas Middleton as little brother, Pugsley Addams. Middleton played the character well, accentuating the idea that Pugsley is a step over the looney line, but anchoring him in devoted love for his sister. His comic timing was good, and his bright alto voice was perfect for the role. Morticia Addams is a character written with the intentions of being the polar opposite of her husband, his bright and life-giving personality being contrasted by her embodiment of death. Aubree Langford played this character well, with a flat and dead like feel to the role, but keeping up the humor in the darkness of the character.

Most notable for this reviewer was the unspoken performance of Alex Montour as Lurch. The role does not require much speaking, and very little singing, but more character than should reasonably come from an undead butler. Montour filled the shoes well, comedic timing abounding and his body language more than making up for the lack of spoken word.

The general feel to the production was one of an unfinished nature. While each actor contributing to the show was talented, they were lacking in their attempt to combine talents as a group on stage. It seemed as if this were a group of people who had memorized the script and score, and still needed time to work on details and development. Time and focus on fluidity could have done wonders for the production value. While the show had its setbacks, and The Addams Family will benefit from the added time on stage. It was a cute family show and could be a good addition to your family Halloween celebrations.