SALT LAKE CITY — The Great Salt Lake Fringe Festival has been so full of wonderful talent this year, and A Bestiary is a great example. Produced by Little Man Theatre Company, and written and directed by Zach Power, this show was full of hilarious moments and existential dialogue. 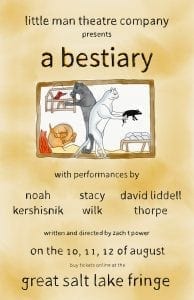 A Bestiary began with an old man (played by Power) reading the Fringe introductory statement about turning off your cell phone and whatnot, while another man (David Thorpe) acted like a dog, messily shoves Kix cereal into his mouth, chomping loudly as if eating dry food. The scene changed, each one involving an animal and a human, and each animal being extremely funny and human speaking abstractly. The audience is even characters in the play, as trees, the city, and stars.

The first scene involved a woodpecker, played by Thorpe and the annoyed young man played by Noah Kershisnik. Thorpe entered in a delivery man outfit with a box and starts knocking on the windows loudly and repetitively, waking Kershisnik. The exchange between the two reminded me of my childhood play activities, and I could see that animalistic tendency in Kershisnik’s performance, and after he shoots the bird, it was interesting to see his behavior replaced by human regret and sorrow. There were other moments like this, such as when Thorpe, while driving, hits Stacy Wilk, who is playing a deer, and after dealing with it for a while, laments that he could have been the one to be hit.

The power in this show comes from the people impersonating animals. Power got his actors to be so specific about their performances, like when Kershisnik plays Wilk’s cat, he laps up milk with the exact same noise and speed that a cat would. Kershisnki’s cat impersonation was so impressive that it highlighted Wilk’s drunken ramblings so that they actually turned out to be meaningful. I think my favorite part was when Kershisnik as a cat slunk around the audience and then sat by me, looking straight ahead. As I slowly turned my head to look at him he did the same, so that when we made eye contact, I had to instantly look away just as he did. It was so funny and reminded me of how my childhood cat acted just the same.

I appreciated everything about A Bestiary: the actors impersonating animals, the use of the whole theater space, the existential writing, and the audience being a part of the action. “Awesome” is a fitting word for A Bestiary.

The Little Man Theatre Company production of A Bestiary was part of the Great Salt Lake Fringe Festival. For more details about scheduling and ticket prices, visit www.greatsaltlakefringe.org.