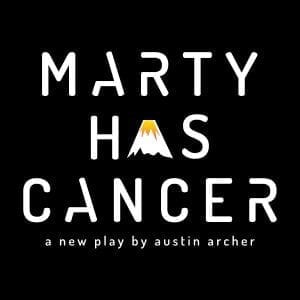 When the scene changes to Rhoul and Choi lounging in beach chairs as they converse wondering if Marty is listening to them as Marty contemplatively looks at the ocean. Then he tells his friends he wants to climb Mount Mauna Loa. In the next scene, Rhoul and Choi are climbing the mountain as they go through the curtains and act as if they are out of breath. The two men discuss how he fell into the lava without a trace. When they get to the top Choi pulls out a photo frame and Rhoul puts a book down as a memorial to Marty.  Choi even gets a little choked up. But a concluding scene between Choi and Amber (Marty’s twin sister) shows that Marty had other motives for wanting to visit Hawaii.

The director, Madeleine Gail Rex, decided to use simple props, like a simple table and chairs, coffee cups, menus, beach chairs, photo frame, backpacks in each scene to give purpose for the actors.  She used the four actors in the show to portray feeling of loss, friendship, in this dark-comedy about coming-of-age. Rex also made good use of Israel “IZ” Kamakawiwo’ole’s ukulele’s solo of “Somewhere Over the Rainbow” as Rhoul and Choi lounging in beach chairs as they converse wondering if Marty is listening to them as Marty looks at the ocean.

Jess Kellner and Sean Sakino play the characters as if they are friends for a long time with the camaraderie they show on stage.  A particular touching moment occurred when Sekino got a little choked up about Marty’s death as Choi pulled out a photo frame and Rhoul puts a book down as a memorial to Marty. Finally, Marza Warsinske is very convincing as Marty’s concerned twin sister Amber, and she worked well with Sekino to play the final scene with sincerity and sadness.

Playwright Austin Archer chose a method of discussing the themes of Marty Has Cancer in a way that was was not too obvious. Marty Has Cancer is a good reminder that many people who seem to have it all together like Marty did, have mental health issues that they hide from even their closest friends.

The Prufrock Productions production of Marty Has Cancer was part of the Great Salt Lake Fringe Festival. For more details about scheduling and ticket prices at the Festival, visit www.greatsaltlakefringe.org.

New #utahtheatre review for JOSEPH AND THE AMAZING TECHNICOLOR DREAMCOAT at @Tuacahn in Ivins!
https://utahtheatrebloggers.com/870599/david-archuleta-soars-in-tuachns-glitzy-joseph-dreamcoat

Here at Regalo Theater Company for the first time to see the hilarious SHREK: THE MUSICAL #uttheater #utahtheatre #theatercritic #shrekyourself

New #utahtheatre review for INTO THE WOODS at Farmington Arts Council.
#sondheim
https://utahtheatrebloggers.com/870499/go-to-the-woods-for-into-the-woods

New #utahtheatre review for INTO THE BREECHES! at Lyric Repertory Company in Logan!
https://utahtheatrebloggers.com/870436/into-the-breeches-is-funny-but-it-wont-knock-your-socks-off

Hey, friends. If you are thinking of auditioning for PRIDE & PREJUDICE at the Orem Hale next season… It might just be my adaptation… #playwrightlife #UtahTheatre

#SweeneyTodd at @UtahShakespeare. That’s the first time I’ve wanted to give a standing ovation in a long while. What a great show. What an excellent cast. #UtahShakes #UtahTheatre

New #utahtheatre review for SHREK THE MUSICAL at the Regalo Theater Company in Lehi!
https://utahtheatrebloggers.com/870328/regalo-theater-companys-shrek-is-a-big-bright-beautiful-show