CEDAR CITY — Every minute of the Utah Shakespeare Festival’s current production of Othello demonstrates why this play is considered one of Shakespeare‘s greatest tragedies. The play is a case study in the psychology of evil, and in the hands of an astute director and phenomenal cast, this production is satisfying both emotionally and aesthetically.

Othello is a “moor” (a Renaissance term for anyone of Middle Eastern or African descent) who serves in the Venetian military. Just after his elopement with Desdemona, he is called to serve in Cyprus and takes his bride with him. His ensign, Iago, is jealous of Othello’s success in his military career and personal life and vows to ruin him. Iago manipulates everyone around him in order to convince Othello that Desdemona has been sexually unfaithful. Once Othello is convinced, he is set on a path that leads four innocent people to their graves.

As portrayed by Wayne T. Carr, Othello truly has a “free and noble nature.” He is entrancing in so many scenes, that even lengthy monologues (such as when Othello describes his life history) are a delight because of Carr’s charisma and confidence. I also appreciated how Carr made Othello’s strong-will apparent, in contrast to the easily persuadable Rodrigo (played by Brandon Burk). By establishing Othello as independent and decisive early on, it made Othello’s resistance to Iago’s musings and his need for proof feel like a plausible reaction to his doubts. But once Othello was convinced, Carr had the character plunge into the depths of pain and sorrow, and my admiration for Carr’s talents was firmly cemented. 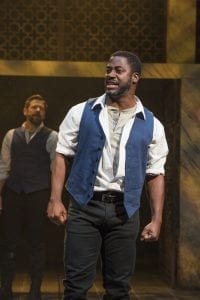 Betsy Mugavero was a perfect Desdemona. She had a convincing sexual chemistry with Carr in the first act, which made their ultimate downfall all the more heartbreaking. Mugavero made Desdemona sincere in her declarations of love towards Othello, and the dedication that the character showed towards her husband made it believable that she would follow Othello to his military assignment in Cyprus. This devotion was also apparent in scenes where Desdemona worried about Othello, which also revealed Desdemona’s sweet nature. In general, Mugavero was a refreshing change from the rigid formality of the military characters that dominate the play.

Brian Vaughn played Iago as a full-blown sociopath who did not care about the human toll and devastation he caused. Vaughn’s Iago was a master manipulator, and my stomach churned as Iago would hatch a plot and put it into action with lies, half-truths, and a mix of flattery. This was most apparent when Iago slyly manipulated Cassio to talk to Desdemona, which Iago later used to suggest to Othello that Cassio and Desdemona had an improper relationship. The sliminess, cunning, and deceptions were both riveting and revolting, and Vaughn was accomplished in portraying Shakespeare’s most evil character. 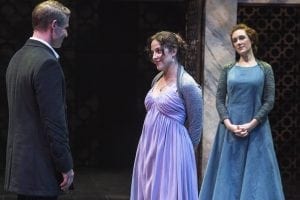 These three leading actors had a supporting cast that was well adapted to the play’s demands. Jeb Burris was a “proper man” in Cassio, who was so guileless that he unwittingly served as Iago’s stooge. Burris was profoundly moving in his scene where Cassio believes he has lost his reputation, though nearly every scene he was in was memorable. Burk’s performance as Rodrigo was also moving, especially when Rodrigo realizes that Iago has deceived and betrayed him. Burk avoided the cliché of a stupid Rodrigo, and instead made him energetic and lustful to such an extent that he was blinded when he thought Iago would help him. Finally, Katie Cunningham deserves praise for her performance as Emilia. The role is a difficult one because, as Iago’s wife, only Emilia has any knowledge of Iago’s true nature, yet she does not stop the action. In Cunningham’s interpretation of the role, this seemed to be because Emilia was both fearful of Iago and unaware of how she was being used. The interpretation worked, especially considering the frantic actions that Emilia attempted when she realized the danger that her husband had created. 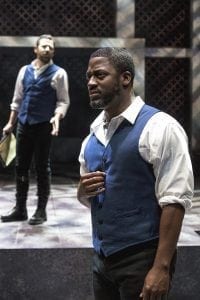 All of these performances were carefully cultivated by director Kate Buckley, who plotted the scenes methodically and built tension wherever possible. The result was a play that simmered as it progressed until the characters burst into violence in the final scenes. Buckley’s blocking was almost choreographic in nature, as the actors used the full space of the small thrust to such a degree that it felt like these characters were trapped with one another. This, coupled with the intimate space, made the emotions and trauma on stage almost palpable, even from my seat on the back row. I also must mention the work of fight director Geoffrey Kent for his intense knife fights he staged, which fit in well with the mood that Buckley had created in the rest of the play.

The technical designers were superb in creating a unified world for Othello. Jaymi Lee Smith‘s lighting designs were bold, textured, and moody. This complimented the grey set designed by Tom Buderwitz, which was painted to look like stone and could absorb the rich colors that Smith shined on it. Kyle Schellinger created costumes that were not military uniforms per se, but rather militaristic clothing that was not particular to any historical time or place. The military characters all wore white button-up shirts, colored vests, and black pants to create a tight, masculine silhouette. The women in the cast had lovely dresses that gently flowed as they walked, which accentuated their civilian status.

Though Shakespeare aficionados can enjoy this Othello, I especially recommend it to people who are not as familiar with Shakespeare or are looking for a memorable introduction to seeing the Bard’s work on stage. Othello has no subplots, a small number of characters, and none of the Shakespeare motifs that can make a play difficult to understand (e.g., characters in disguise, mistaken identity, characters with similar names). The great performances and fantastic direction only add to the clarity of the show.

Plus, because the main characters are not royalty, and there are no supernatural elements, Othello seems frighteningly plausible to a modern audience. If there were any doubts why the Utah Shakespeare Festival was the only theatre company in the state to win the Regional Theatre Tony Award, this production of Othello will put those doubts to rest completely.

The Utah Shakespeare Festival production of Othello plays various dates at 2 PM or 8 PM through October 13 in the Ames Studio Theatre on the campus of Southern Utah University. Tickets are $50-54. For more information, visit www.bard.org.