Laughter flows at Creekside’s MUCH ADO ABOUT NOTHING 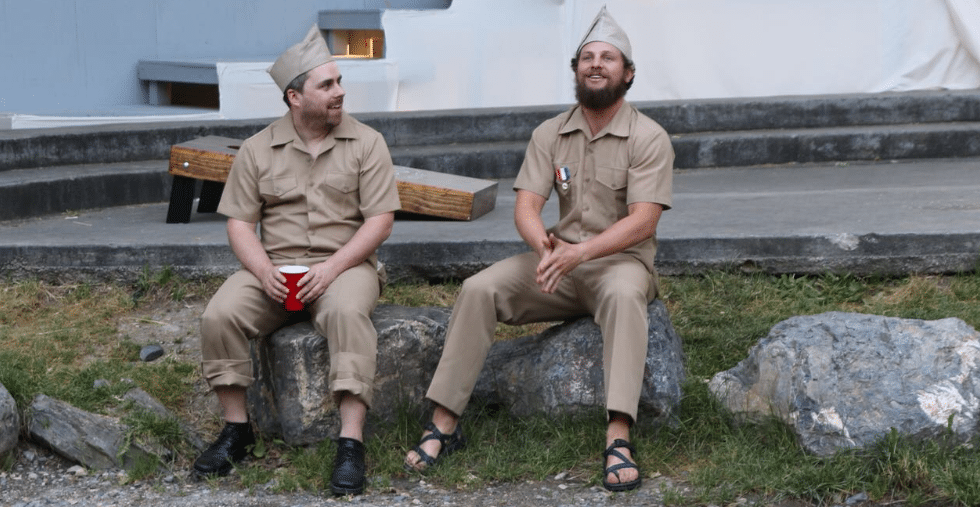 CEDAR HILLS — Much Ado About Nothing is another fantastic production at the Creekside Theatre Fest. Audience members may get the best core workout of the year from laughing at all the comedy in this production.

At the beginning of Much Ado About Nothing, victorious soldiers return home to enjoy some festivities and relax into love and life. Don Pedro is the leader whose brother Don Jon was against him in the war and is recently “reformed.” Also returning home is Benedick, who has a teasing rivalry with Beatrice. Benedick and Beatrice’s friends decide to trick both of them into thinking that they like each other and some hilarious flirtation begins. Meanwhile, veteran Claudio is in love with Hero, Beatrice’s friend. However, Don Jon creates trouble and convinces Claudio and Don Pedro that Hero is unfaithful. This being a Shakespeare comedy, though, a happy ending is assured for everyone.

Kris Jennings did a marvelous job directing this production set in the late 1940s. Jennings’s staging made great use of the great outdoors in this show by running off into the trees, standing far off on the dried creek bridge, and even coming into the audience.  I loved all the little added movements between characters, like Beatrice and Hero doing their little girly finger wiggle at each other while squealing. One scene was particularly appealing when Benedick crawled through the audience trying to hide from Claudio, who said all his lines at audience members while pretending not to see him. (Claudio even beat his golf club on the ground nearly missing Benedick.) 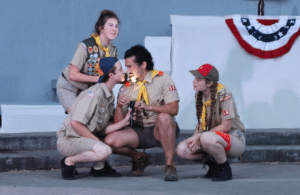 Jennings also made a neat choice in making the audience feel like part of the show. From the beginning scouts were out in the audience chatting with them. I was asked if I had anything dangerous in my purse. This interaction wasn’t limited to pre-show time; throughout the night cast members came into the audience and spoke to the audience. Another choice I thought grand was the fun banter between characters who were friends. At one point Claudio towel-whips Benedick. Similarly, at one point Dogberry, upon sneezing, screams in dread until “neighbor” Verges cleans his hands and face. I also appreciated Jennings’s pacing. Much Ado ran nearly two and a half hours, and I’ve seen it rushed before, but Jennings milked each scene for its full potential without making the play feel tedious.

The cast was so wonderful it will be hard not to mention everyone, so I’ll point out my favorite moments. Benedick, played by M. Chase Grant was hilarious and made his dialogue and reactions come so naturally, like when he pointed out specific members of the audience to explain a point or to get an agreement. Benedick’s transformation from hiding and scared his friends will see him to completely enamored with Beatrice when she comes to fetch him for dinner was awesome. Benedick completely forgot how muddy and funny he looked as he put on the air of a body builder ready to be checked out by hot babes.

I also loved Marco Antonio Vega‘s perfect performance as Dogberry. His short tight scout shorts were enough to keep me laughing the whole time he was onstage, but the way Vega stood reminded me of a Stevie Urkel impression. Vega acted like a germophobe, and used his breath and sniffing to intensify his oddness. When he burst into an angry yell of, “Oh that I had been written down an ass!” I laughed harder and longer than any other part of the play.

Beatrice (played by Shaunna Thomson) and Hero (played by Alice Johnson), were both well cast, and I appreciated their ability to add humorous tidbits, despite their scenes not having as much opportunity for humor as the men’s scenes. For example, when Johnson is talking about Thompson as if she isn’t there, they nearly run into each other. At one moment Thompson is hiding behind a pole and Johnson leans against it, then swings nearly around it, almost colliding into Thompson. It was a great moment.

The look of the play was fun and had an appropriately quirky 1940’s feel. I loved the scout uniforms. Many actors had the tight ripped off short shorts, and used props in a ridiculous way, like Second Watchman (played by Katie Rowley) throwing the arrow instead of using her bow for it. Another example was when one of the other watchmen blocked the exit with a wooden stick spear, causing most of the scouts to fall into a heap. Another fun visual twist was Verges’s (played by Hannah Nimer) hair wired straight out in two braids like Pippi Longstocking.

Creekside’s produciton of Much Ado About Nothing had so many moments of pure genius. Much of the show brought me such joy and laughter, and I hope they get a full hillside every night. It was a pleasure to enjoy this marvelous production.

The Creekside Theatre Festival production of Much Ado About Nothing plays various nights at 8 PM through June 30 at at Heritage Park (4425 West Cedar Hills Dr, Cedar Hills). Tickets are $11-15. For more information, visit www.creeksidetheatrefest.org. 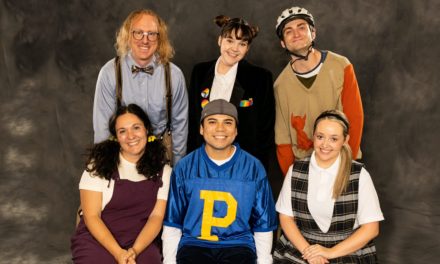 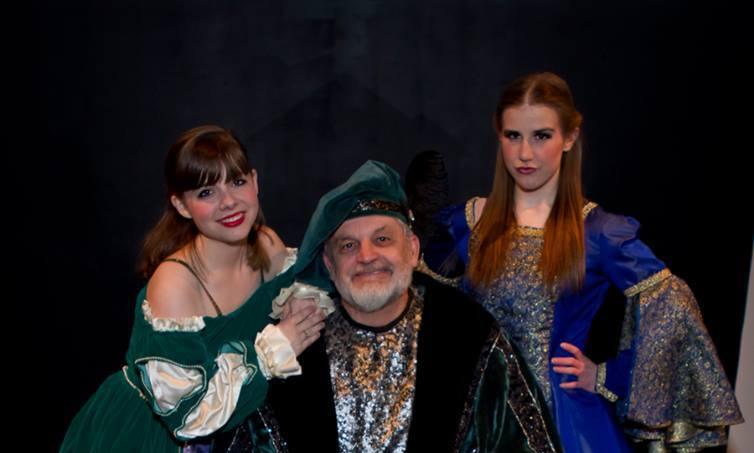