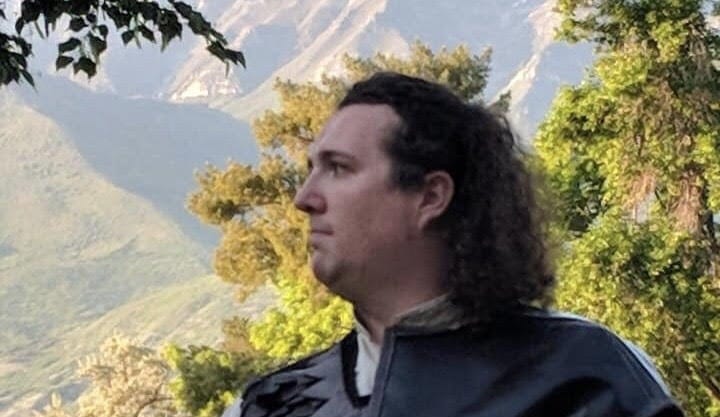 PROVO — Shakespeare.  The name may send chills down your back – thrills of pleasure if you’re a fan, or shivers of terror if all you know of the Bard is what was forced on you in high school.  Either way, if you are up for an outing on a fine summer evening, Grassroots Shakespeare Company’s romp through Two Noble Kinsmen will have you playing along with their antics. 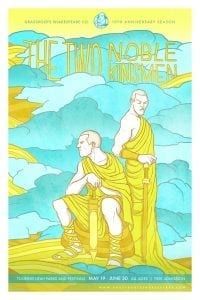 Grassroots Shakespeare’s goal is to shake off the weight of production elements and formal expectations that burden modern theater. Out with the elaborate sets, the fancy costumes, the piles of props. Ditch the director, the building, the painstaking rehearsals, and the expensive tickets. Leave nothing but the bare stage, the script, and the joyful, creative give-and-take between actors and audience. It’s unpretentious, portable theater, in the essence of Renaissance style. No one need be intimidated.

With that goal in mind, the company uses a multi-level wood set that can be assembled on site in about an hour, with draping hung shower curtain style for backdrop.  It’s a playground versatile enough for any make-believe. Costumes consist of “representative” bits brought by individual actors. Think kids putting on an impromptu nativity on Christmas Eve.  A few small props round out the entire scenic design.  That’s enough.

The play Two Noble Kinsmen lends itself particularly well to the company’s goal.  Few people have heard of the play, in part because for many years it was banished from collections of Shakespeare plays. Shakespeare only wrote part of it.  The rest was contributed by another well-known playwright of the day, John Fletcher.  Academics squabble over which artist penned which parts, but they agree the play isn’t…well…isn’t exactly Hamlet.  And because nobody has canonized the text, Grassroots is free to hack away any dense thickets of dialogue or obscure references that get in the way of the action.  What remains is a Shakespearean melodrama of the “hiss the villain” variety. 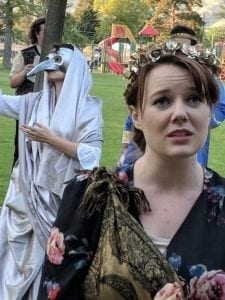 It wouldn’t hurt to have read a synopsis of the play before attending, but it isn’t necessary.  Basically, there are two high-ranking cousins, Arcite (played by TJ Christensen) and Palamon (played by Tyler Harris), who have been taken as honorable captives and jailed when their city falls in war to Duke Theseus.  The two have been inseparable since boyhood and vow to always love and protect each other no matter what happens.  Minutes later they both get a brief glimpse of the beautiful maiden Emilia, sister of Theseus, and instantly become bitter enemies in competition for her affections.  Add in the jailer’s daughter who is nuts for Palamon, an unscrupulous doctor, and a few meddling gods and the result is mayhem.  It’s a tragicomedy based on Chaucer’s The Knight’s Tale played with emphasis on the comedy.

Since no body microphones are used, the Grassroots actors have to be up to the challenge of projecting their voices to carry in an outdoor open space, in this case, competing with the ducks at the BYU Botany pond. One problem with sound was caused by small group of musicians (Robert Starks, Gary Argyle, and Scott Robinson) playing background music. At first the ensemble, guitarists and a drummer, played too loudly and with too insistent a drum beat.  As a result, not only were some of the spoken words masked just when exposition was establishing characters and place, but more importantly  the mental transition an audience member must typically go through to pick up the sense of Shakespearean language was hindered.  I felt that the rhythm of the drum clashed distractingly with that of the rhythm of the lines.  After a while, though, the musicians lowered the intensity of their sound and started working with, rather than against, what was happening on stage. 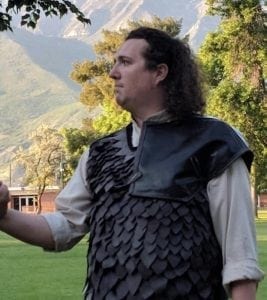 On the whole the actors succeeded in clearly communicating the text.  Paris Abigail Moore, playing the part of a Pirithous, had a delivery that was often too rapid and diction too mumbled for any member of my party to catch what she was saying. Occasionally Sharah Meservy as the jailer’s daughter was carried away in a frenzy and became unintelligible. But besides those moments, Meservy was one of the stand-out performers of the cast.  She and Jarrith Parker McCoy as her “wooer” (lower class characters are only identified by position in this play, not by name) greatly added to the fun in adapting the play with an American twist, using well-known folk songs and speaking in comic American country bumpkin type accents. Christensen and Harris, playing the dashing noble cousins, were excellently cast, vacillating between kind respect and jealous rage with aplomb. Madison Ford as Emilia coped well with what is really a one-dimensional role of heart-torn heroine. Søren Paul Burdge, as the repellent doctor, did particularly well in involving the audience, earning cat calls and boos for his prescription of salacious remedies for the jailor’s daughter’s love-sickness.  That response was exactly what the whole cast works for.

This Grassroots Shakespeare production makes old theater lively and memorable by involving the audience.  Not only is the fourth wall broken, it isn’t allowed. First the audience members were encouraged to move their blankets right up to the edge of the stage.  Then came a  pre-show of totally irrelevant but popular and energetic music that tempted the audience into singing along, plus name-which-play line quiz questions and inviting people to come up on stage to demonstrate their own Shakespearean acting skills. The audience was given leave to make contributions of cheers, sighs, or outright commentary on the action during the show.  Throughout the play actors felt free to roam behind and through the audience, going so far as to hold someone’s hand or talk back to a heckler.  All at a brisk pace that kept the evening to a manageable 1 hour and 40 minute run time. In As You Like It Shakespeare said “All the world’s a stage, and all the men and women … players…”   Grassroots Shakespeare Company makes certain of it.

The Grassroots Shakespeare Company production of Two Noble Kinsmen plays various dates and times in Salt Lake, Utah, and Grand Counties through July 7. Admission is free, but a donation is encouraged. For more information, visit grassrootsshakespeare.com. 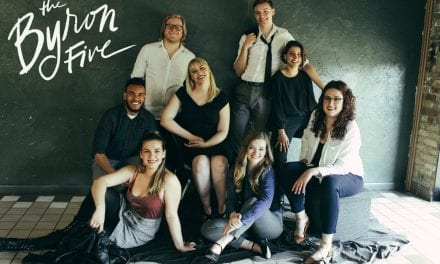 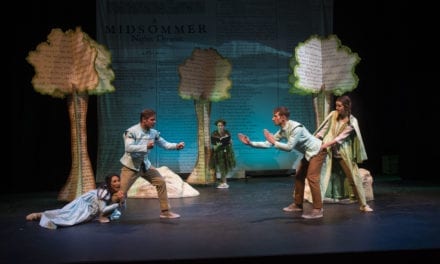 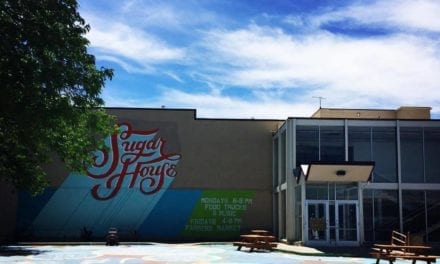